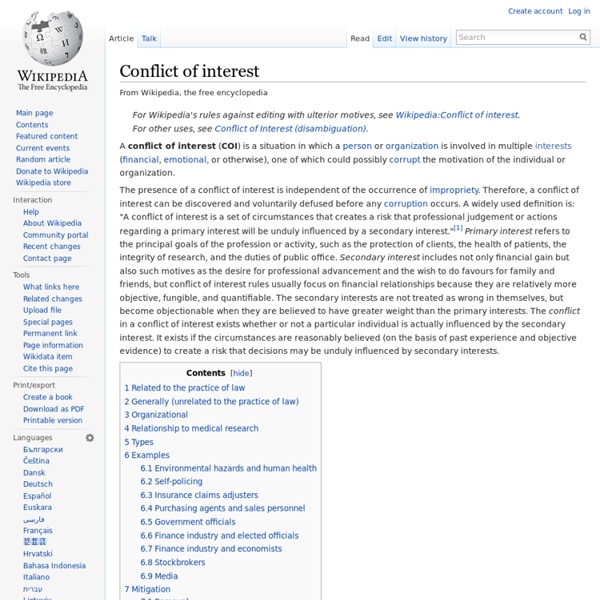 The presence of a conflict of interest is independent of the occurrence of impropriety. Therefore, a conflict of interest can be discovered and voluntarily defused before any corruption occurs. A widely used definition is: "A conflict of interest is a set of circumstances that creates a risk that professional judgement or actions regarding a primary interest will be unduly influenced by a secondary interest."[1] Primary interest refers to the principal goals of the profession or activity, such as the protection of clients, the health of patients, the integrity of research, and the duties of public office. Secondary interest includes not only financial gain but also such motives as the desire for professional advancement and the wish to do favours for family and friends, but conflict of interest rules usually focus on financial relationships because they are relatively more objective, fungible, and quantifiable. Related to the practice of law[edit] Organizational[edit] Types[edit]

Chomsky: The Corporate Assault on Public Education March 8, 2013 | Like this article? Join our email list: Stay up to date with the latest headlines via email. The following is Part II of the transcript of a speech Noam Chomsky delivered in February on "The Common Good." Click here to read Part I. VU to review prolific economist's work following plagiarism inquiry Details Category: News Created on Tuesday, 07 January 2014 16:42 Written by Amsterdam Herald Photo by Smart Cities Amsterdam’s Free University (VU) is to review the entire output of one of its most prolific economists following the latest plagiarism case to hit Dutch academia.

John Boehner Backed Deregulation Of Online Learning, Leading To Explosive Growth At For-Profit Colleges With a mere eight lines buried in an 82,000-word budget bill passed in 2006, Congress eliminated legislation that had for more than a decade limited how many students colleges could enroll in online courses -- rules aimed at protecting students against dubious programs. Those eight lines have proven a potent fertilizer for a for-profit college industry that has since grown to enormous proportions, collecting most of its profits via federal student aid dollars. In the five years since Congress deregulated online education, enrollments at for-profit colleges have nearly doubled. Six major corporations owning for-profit institutions have enjoyed initial public offerings on Wall Street, with each promoting the rapid growth of online classes to investors and netting millions in compensation for executives. Revenues have doubled at the University of Phoenix and Kaplan University, two of the largest players -- so has the rate at which its students have defaulted on their federal loans.

Title Fight: US Academics Harassed over 'False' Credentials - SPIEGEL ONLINE - News - International Ian Baldwin must have felt flattered by the parliamentary debate last Thursday. The 49-year-old American is one of the few international academic elites to find himself recruited in a recent German drive to attract specialists from around the world. Speaking to parliament, German Research Minister Annette Schavan said Germany had to become even more attractive for top foreign researchers -- for people, in other words, like Baldwin. ?Cronyism? Cronyism is partiality to long-standing friends, especially by appointing them to positions of authority, regardless of their qualifications. Hence, cronyism is contrary in practice and principle to meritocracy. Cronyism exists when the appointer and the beneficiary are in social contact. Often, the appointer is inadequate to hold his or her own job or position of authority, and for this reason the appointer appoints individuals who will not try to weaken him or her, or express views contrary to those of the appointer. Politically, "cronyism" is derogatorily used.[1] Etymology[edit]

Part I, The myth of authentic choice By Mike Klonsky This is the first part of a two-part series of posts on Charter school mythology. "The law, in its majestic equality, forbids the rich as well as the poor to sleep under bridges, to beg in the streets, and to steal bread." -- Anatole France Current conceptions of school choice were originally conceived by free-market, neo-liberal ideologues like the University of Chicago's Milton Friedman. In his 1955 article "The Role of Government in Education" Friedman first proposed a system of publicly operated schools with privately run but publicly funded schools, using payment vouchers issued to parents/consumers. Otto-Friedrich-Universität Bamberg: Prof. Dr. Richard Münch: Lehrstuhl für Soziologie II: Sozial- und Wirtschaftswissenschaften Inclusion and Exclusion in the Liberal Competition State "This book examines the increasingly international division of labour, which promotes transnational integration. It analyses the change in worker solidarity as it moves from collective national welfare to a transnational inclusion of workers from various links in the production chain. Examining three types of welfare regimes within the USA, Germany, Denmark and Sweden, the author addresses how and why globalization is furthering the change from the welfare state to the competition state. The book considers in particular the change to solidarity taking place because of the internationalization of labour division; a change away from the segmented and differentiated system of nation states with strong internal national solidarity to broader, more inclusive and cross-border labour identity and inclusion.

Sungkyunkwan University Sungkyunkwan University (also known as SKKU or simply Seongdae) is a private research university with campuses in Seoul and Suwon. Originally, it was founded in 1398 by the Joseon Dynasty located in the heart of central Seoul.[3] Uniquely it was authorized as Sungkyunkwan, the foremost educational institution, by the great code of state administration [4] pertaining to the royal assent.[5] Today, the university has two campuses: the Humanities and Social Sciences Campus in Seoul, and the Natural Sciences Campus in Suwon. Eighteen schools and three colleges offer degrees at the bachelor's level, and twelve graduate schools confer various degrees at both the masters and doctoral levels.

Translation of 'Fact-Free Science' by Michaela Smith - GoFundMe The integrity of publications by leading Dutch economist Peter Nijkamp, his PhD student Karima Kourtit and Turkish co-author Baycan has been called into question. Nijkamp, Kourtit and Baycan are unwilling to allay the suspicions of those raising concern with openness and transparency of methods and data. The case in hand can be found here: In recent years, the integrity of many scientific investigations and of scientists themselves has come under scrutiny.

Samsung Samsung was founded by Lee Byung-chul in 1938 as a trading company. Over the next three decades the group diversified into areas including food processing, textiles, insurance, securities and retail. Samsung entered the electronics industry in the late 1960s and the construction and shipbuilding industries in the mid-1970s; these areas would drive its subsequent growth. Yes, the marketization of education is still a bad idea « Kritische Studenten Utrecht Posted by kritischestudentenutrecht under Oktober 2011 | Tags: onderwijsbeleid, zijlstra | [2] Comments by Alexander Beunder This article appears in Krantje Boord #9 Oktober 2011 The “Strategic Agenda” of the Dutch Ministry of Education, approved in July 2011 by the government, is to pursue more marketization of education and stimulate intensive cooperation between education and business. Is this so bad? Do we have to discuss this again?

University finds Dutch economist guilty of misconduct; he responds Peter Nijkamp The Free University of Amsterdam found Peter Nijkamp, one of the nation’s leading economists who has lost several papers for self-plagiarism, has been found guilty of “questionable research practices,” according to the newly released results of an investigation. Nijkamp has published a strongly worded criticism of the report (at least according to Google Translate, since his writing is in Dutch). According to independent student publication Ad Valvas, the commission, led by Jaap Zwemmer, a professor emeritus at the University of Amsterdam, found Nijkamp was guilty of “questionable research practices.”