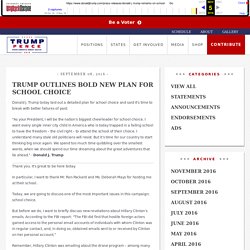 Trump today laid out a detailed plan for school choice and said it's time to break with better failures of past: "As your President, I will be the nation’s biggest cheerleader for school choice. I want every single inner city child in America who is today trapped in a failing school to have the freedom – the civil right – to attend the school of their choice. I understand many stale old politicians will resist. Thank you. In particular, I want to thank Mr. Today, we are going to discuss one of the most important issues in this campaign: school choice. But before we do, I want to briefly discuss new revelations about Hillary Clinton’s emails. Remember, Hillary Clinton was emailing about the drone program – among many other extremely sensitive matters. Trump Outlines Bold New Plan for School Choice Donald J Trump for Presiden. Trump higher ed. It's cool that the guy who just had to pay $25 million for starting a fraudulent university is now picking the next Secretary of Education. 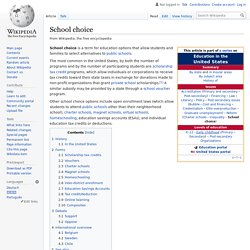 SGOs/STOs use the donations to create scholarships that are then given to help pay for the cost of tuition for students. These scholarships allow students to attend private schools or out-of-district public schools that would otherwise be prohibitively expensive for many families. Rumor reported on FOX News: Possible Ed Secretary: Ben Carson, Eva Moskowitz, Michelle Rhee. Ben Carson - Wikipedia. Benjamin Solomon "Ben" Carson, Sr. 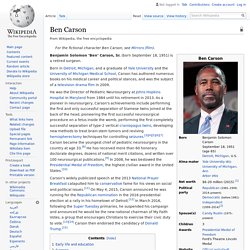 (born September 18, 1951) is a retired surgeon. Born in Detroit, Michigan, and a graduate of Yale University and the University of Michigan Medical School, Carson has authored numerous books on his medical career and political stances, and was the subject of a television drama film in 2009. Ben Carson is unlikely to serve in Trump’s Cabinet. Donald Trump, right, talks with Ben Carson during a break in a Republican presidential debate in September. 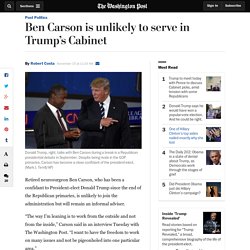 Despite being rivals in the GOP primaries, Carson has become a close confidant of the president-elect. (Mark J. Terrill/AP) Retired neurosurgeon Ben Carson, who has been a confidant to President-elect Donald Trump since the end of the Republican primaries, is unlikely to join the administration but will remain an informal adviser. “The way I’m leaning is to work from the outside and not from the inside,” Carson said in an interview Tuesday with The Washington Post. Eva Moskowitz - Wikipedia. Eva Sarah Moskowitz, born March 4, 1964,[1] is founder and CEO of Success Academy Charter Schools and a former City Councilmember for the Upper East Side, both in New York City.[2][3][4] Her later work has centered on education. 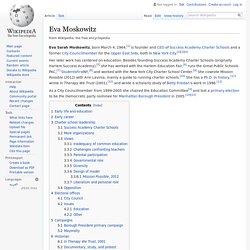 Besides founding Success Academy Charter Schools (originally Harlem Success Academy),[5] she has worked with the Harlem Education Fair,[6] runs the Great Public Schools PAC,[7] StudentsFirstNY,[8] and worked with the New York City Charter School Center.[9] She cowrote Mission Possible (2012) with Arin Lavinia, mainly a guide to running charter schools.[10] She has a Ph.D. in history,[11] wrote In Therapy We Trust (2001),[12] and wrote a scholarly study of Betty Friedan's work in 1996.[13] As a City Councilmember from 1999-2005 she chaired the Education Committee[4] and lost a primary election to be the Democratic party nominee for Manhattan Borough President in 2005.[14][15] Early life and education[edit] Early career[edit] 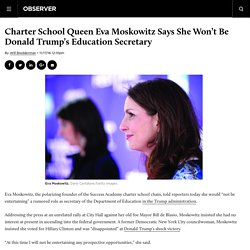 Dario Cantatore/Getty Images Eva Moskowitz, the polarizing founder of the Success Academy charter school chain, told reporters today she would “not be entertaining” a rumored role as secretary of the Department of Education in the Trump administration. Addressing the press at an unrelated rally at City Hall against her old foe Mayor Bill de Blasio, Moskowitz insisted she had no interest at present in ascending into the federal government.

A former Democratic New York City councilwoman, Moskowitz insisted she voted for Hillary Clinton and was “disappointed” at Donald Trump’s shock victory. “At this time I will not be entertaining any prospective opportunities,” she said. Citing a lack of experience, Ben Carson declined consideration for Trump's cabinet. Even though he ran for POTUS. Michelle Rhee - Wikipedia. Michelle A. 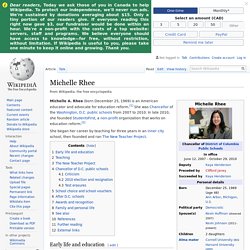 Rhee (born December 25, 1969) is an American educator and advocate for education reform.[1] She was Chancellor of the Washington, D.C. public schools from 2007 to 2010. In late 2010, she founded StudentsFirst, a non-profit organization that works on education reform.[2] She began her career by teaching for three years in an inner city school, then founded and ran The New Teacher Project. Early life and education[edit] Rhee was born in Ann Arbor, Michigan, the second of three children of South Korean immigrants Shang Rhee, a physician, and Inza Rhee, a clothing store owner.[3][4][5][6] She was raised in the Toledo, Ohio area and educated in public schools, through the sixth grade. Teaching[edit] The New Teacher Project[edit] Chancellor of D.C. public schools[edit] In 2007 the D.C. Trump meets with Michelle Rhee as she's being eyed for Secretary of Education. President-elect Donald Trump met with controversial former Washington, D.C. public school chancellor Michelle Rhee, who is considered to be in the running for Secretary of Education as part of his administration. 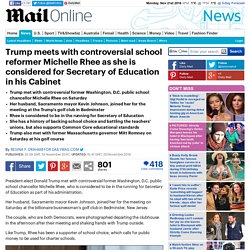 Her husband, Sacramento mayor Kevin Johnson, joined her for the meeting on Saturday at the billionaire businessman's golf club in Bedminster, New Jersey. The couple, who are both Democrats, were photographed departing the clubhouse in the afternoon after their meeting and shaking hands with Trump outside. When you find out Michelle Rhee is meeting with Donald Trump today about becoming the next Secretary of Education. Donald Trump meets with creationist Jerry Falwell Jr about possibly becoming next Secretary of Education. Many of America’s conservative, evangelical community were distrustful of the religious bona fides of the thrice-married former casino magnate when he asked them to vote for him. 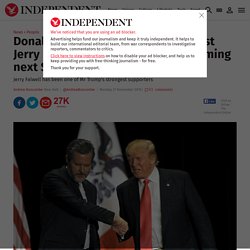 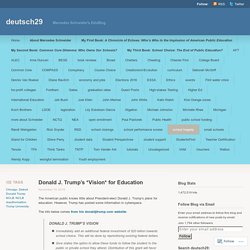 Trump’s plans for education. However, Trump has posted some information in cyberspace. The info below comes from his donaldjtrump.com website: DONALD J. TRUMP’S VISIONImmediately add an additional federal investment of $20 billion towards school choice. Trump wants to institute funding portability (money “following the child”). Of course, there is also the reality that the federal government has been strongly favoring under-regulated charter school promotion and expansion since George W. had his kumbaya moment with Congress in December 2001 with the creation of the last ESEA reuathorization, No Child Left Behind (NCLB)– a reauthorization that took Congress eight delinquent years to exit. KEY ISSUESAt the state and federal level, the United States spends more than $620 billion on K-12 education each year.

Jersey Jazzman: My Speech at the NJEA Convention. I had an entire set of slides ready to go for today. I was going to talk about things that I believe are important: school funding, teacher evaluation, testing, charter schools, unions, tenure, seniority, local control, identity, race, class, gender, sexual orientation… I still think these things are important, maybe now more than ever. I still want to take a few minutes to talk about some of them. But I would be seriously remiss if I stood before you here today – the first one of your colleagues to address you as the keynote speaker in a long, long time – and pretended that what happened on Tuesday isn’t the first and foremost topic we need to discuss. Emily Talmadge: The Beast Will Thrive in a Trump Administration and We Must Say No. Please watch the 10-second video at the end of this post. You will love it! Emily Talmadge, a teacher-blogger in Maine, used to worry about the dangers inherent in a Clinton administration. Now she warns that the threat of competency based education–delivered online, all the time, profiting a few, bad for humans–will thrive in a Trump Administration.

“The real agenda – the ongoing march toward a cradle-to-grave system of human capital development that relies on the most sophisticated data collection and tracking technologies to serve its unthinkably profitable end – is fueled and directed by a multi-billion dollar education-industrial-complex that has been built over the course of decades. “It’s an absolute beast, an army of epic scale, and it’s a system that has the same uncanny ability to blend in with its surroundings as a chameleon. “Take, for example, the new “innovative assessment systems” that are being thrust on us every which way in the wake of ESSA. Did the idea of free public higher education go down with the Democrats? Hillary Clinton and Sen.

Bernie Sanders elevated the issue of college affordability with campaign proposals to make public higher education free for the vast majority of American families, but those prospects have faded with the election of Donald Trump. Trump policy adviser Sam Clovis made it clear during the campaign that the Republican would not support free public higher education, calling the idea “absurd” in an interview with Inside Higher Ed. And with congressional Republicans calling for the federal government to dial back its role in education, the chances of a federal-state partnership to lower the cost of college appear slim. Proponents of debt-free college, nevertheless, remain convinced that the movement still has legs. They say underlying concerns about skyrocketing student debt and price barriers in higher education are as relevant as ever. In the age of Trump, why bother teaching students to argue logically?

Two things that happened on Wednesday morning. First, the world woke up to the reality of a Trump victory in the US presidential election. In the age of Trump, why bother teaching students to argue logically? Will ‘anti-science’ Trump harm US research? Will Donald Trump be the first “anti-science” president of the United States, as some have claimed?

He has shown almost no interest in science during his election campaign, but his few utterances in this area have sent chills through the world-leading US research community. When conservative talk-show host Michael Savage volunteered in an interview with the now president-elect to take over the National Institutes of Health, which spends about $32 billion (£25.5 billion) a year on research, Mr Trump said that it would be a good idea. “You would get common sense if that were the case…because I hear so much about the NIH, and it’s terrible,” explained Mr Trump of perhaps the most admired science organisation in the world. His determination to tear up the Paris agreement on climate change, branded a Chinese “hoax” designed to kill US manufacturing, has also been cited as evidence of his anti-science outlook.