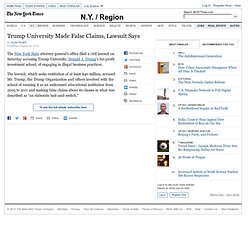 Trump, the Trump Organization and others involved with the school of running it as an unlicensed educational institution from 2005 to 2011 and making false claims about its classes in what was described as “an elaborate bait-and-switch.” In a statement, , the attorney general, said Mr. Trump appeared in advertisements for the school making “false promises” to persuade more than 5,000 people around the country — including 600 New Yorkers — “to spend tens of thousands of dollars they couldn’t afford for lessons they never got.”

The advertisements claimed, for instance, that Mr. Trump had handpicked instructors to teach students “a systematic method for investing in real estate.” “No one, no matter how rich or famous they are, has a right to scam hardworking New Yorkers,” Mr. On Saturday evening, Michael Cohen, a lawyer for Mr. George Sorial, another lawyer for Mr. “This is tantamount to extortion,” Mr. 98percentapproval. Trump Suggests Obama Is Behind Trump University Lawsuit. New York Attorney General Eric Schneiderman filed suit Saturday against “Trump University,” the professional development program bearing the New York real estate mogul Donald Trump’s name, seeking $40 million in damages for alleged fraud. 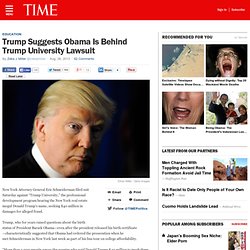 Trump, who for years raised questions about the birth status of President Barack Obama—even after the president released his birth certificate—characteristically suggested that Obama had ordered the prosecution when he met Schneiderman in New York last week as part of his bus tour on college affordability. “More than 5,000 people across the country who paid Donald Trump $40 million to teach them his hard sell tactics got a hard lesson in bait-and-switch,” said Schneiderman in a statement.

“Mr. Trump used his celebrity status and personally appeared in commercials making false promises to convince people to spend tens of thousands of dollars they couldn’t afford for lessons they never got. Schneiderman went first: Fraud claims follow Trump University. This type of positive messaging has attracted voters across the country, vaulting Donald Trump to the top of presidential primary polls. 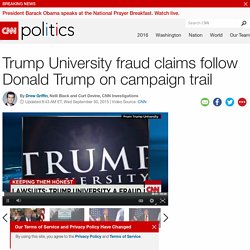 More than a decade ago, Donald Trump launched another nationwide campaign with that same winning promise, but the results have been mixed and controversial. He called it Trump University. From 2005 until it closed in 2010, about 10,000 students across the nation signed up for the program that promised success in real estate by offering courses and seminars based on the principles of the business mogul himself. Judge bashed by Trump orders release of company records. Marco Rubio accused Donald Trump of starting a "fake university" at the Feb. 25 GOP debate in Houston. 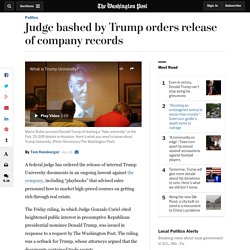 Here's what you need to know about Trump University. (Peter Stevenson/The Washington Post) A federal judge has ordered the release of internal Trump University documents in an ongoing lawsuit against the company, including “playbooks” that advised sales personnel how to market high-priced courses on getting rich through real estate. The Friday ruling, in which Judge Gonzalo Curiel cited heightened public interest in presumptive Republican presidential nominee Donald Trump, was issued in response to a request by The Washington Post.

The ruling was a setback for Trump, whose attorneys argued that the documents contained trade secrets. Curiel’s order came the same day that Trump railed against the judge at a boisterous San Diego rally for his handling of the case, in which students have alleged they were misled and defrauded. “I think Judge Curiel should be ashamed of himself. Donald Trump's Trump University Trial Date To Be Set. Presumptive Republican Presidential nominee Donald Trump, no stranger to litigation, faces some off-message distractions from at least two civil lawsuits in the immediate months ahead. 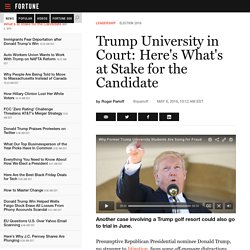 One is in San Diego, and concerns his controversial Trump University operation, and the other is in West Palm Beach, Fla, and relates to the Trump National Golf Resort of Jupiter, Fla. Just how distracting these cases may prove we’ll begin to find out Friday, when a San Diego federal judge sets a trial date in a class-action against Trump University, which sold real-estate seminars to the public between 2005 and 2010.

The Trump University Lawsuit Heads to Trial November 28. Donald Trump is scheduled to go on trial this month in a class-action lawsuit against him and his now-defunct Trump University, potentially taking the witness stand weeks before his inauguration as president of the United States. 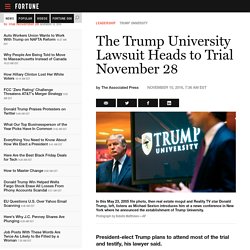 U.S. District Judge Gonzalo Curiel, the Indiana-born jurist who was accused of bias by Trump during the campaign for his Mexican heritage, will hold a hearing Thursday on jury instructions and what evidence to allow at trial, which begins Nov. 28. Among the flurry of requests from both sides to be considered Thursday is a highly unusual petition by Trump’s attorneys to exclude any statements made by or about their client during the presidential campaign. The request would apply to Trump’s tweets, a video of Trump making sexually predatory comments about women, his tax history, revelations about his private charitable foundation and public criticisms about the judge in the case. “He has very, very strong feelings about this case,” Petrocelli said at the time. President-elect Trump due to appear in court at trial starting later this month. Before Donald Trump raises his right hand to take the oath of office in January, he’s set for a less-auspicious swearing-in: taking the witness stand in his own defense in a federal court civil trial over alleged fraud in his Trump University real estate seminar program. 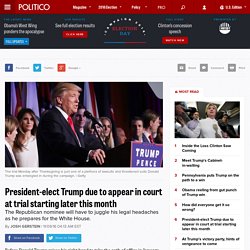 Trump faces a legal ordeal no president-elect has ever encountered: juggling defending himself before a jury with preparing for the vast challenges a political novice will face in assuming the presidency. Story Continued Below And the class-action case set for trial the Monday after Thanksgiving is just one of a plethora of lawsuits and threatened suits Trump was entangled in during the campaign—litigation that doesn’t seem likely to disappear anytime soon and might even intensify with Trump headed to the White House. There’s also a New York state investigation into his charitable foundation and a reported federal investigation into some of his advisers’ ties to Russia. Trump University: It’s Worse Than You Think. Following the release, earlier this week, of testimony filed in a federal lawsuit against Trump University, the United States is facing a high-stakes social-science experiment. 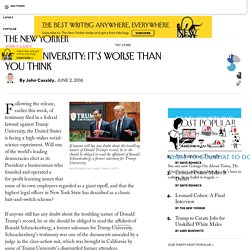 Will one of the world’s leading democracies elect as its President a businessman who founded and operated a for-profit learning annex that some of its own employees regarded as a giant ripoff, and that the highest legal officer in New York State has described as a classic bait-and-switch scheme? If anyone still has any doubt about the troubling nature of Donald Trump’s record, he or she should be obliged to read the affidavit of Ronald Schnackenberg, a former salesman for Trump University.

Schnackenberg’s testimony was one of the documents unsealed by a judge in the class-action suit, which was brought in California by some of Trump University’s disgruntled former attendees. In one sense, the latest revelations don’t break much new ground. That was the bait—or, rather, the initial bait. Geen schikking voor Trump University. Trump eerste President-elect ooit die voor oplichting van studenten voor de rechter staat, nog voor de inauguratie. Mogelijke schikking in rechtszaak Trump University. 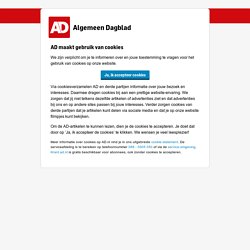 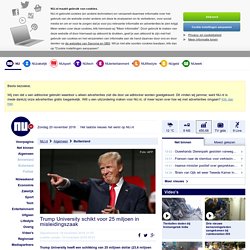 " "We've had correspondence with them. I didn't make a big deal out of it or hold a press conference. But we have been looking into the Trump Foundation to make sure it's complying with the laws governing charities in New York. " The inquiry comes amid a series of reports by The Washington Post that Trump spent money from his charity, The Donald J. Trump Foundation, on himself, used it to recycle others' contributions to make them appear to have come from him and hasn't given to the foundation since 2008. In another article, The Post had reported that the recipients of five charitable contributions listed by the Trump Foundation had no record of receiving those donations. Eric Schneiderman opens investigation of Donald J. Trump Foundation. The Democratic attorney general of New York who has opened investigations of climate fraud against oil companies picked a new target Tuesday — Republican presidential nominee Donald Trump.

New York Attorney General Eric Schneiderman said during an appearance on CNN on Tuesday afternoon that he was concerned that the Donald J. Trump Foundation was breaking laws and regulations related to charitable groups. According to multiple news outlets shortly afterward, Mr. Schneiderman formally opened an investigation despite having declined to investigate the Clinton Foundation and having endorsed Mrs. Clinton for president. Trump University: could a higher education scandal impeach a president ? The US president-elect, Donald Trump, faces a civil trial in the fraud lawsuit against him over his now-defunct for-profit learning enterprise “Trump University”. Various elements of that statement might take a while to sink in. The story – of former students saying that they were misled into believing that they would be taught by expert real estate tutors “hand-picked” by Trump – has been around since 2010 and was an issue in the presidential election campaign.

Clearly, however, it was not that big an issue for plenty of voters. The Absolute Best, Most Terrific Reporting on Trump University. President-elect Trump has agreed to pay $25 million to settle lawsuits from students who say they were defrauded by Trump University. Trump University promised to help students get rich. Enrollees would study the wisdom of The Donald and get mentoring from other terrific businesspeople. But a class-action suit by former students and a suit brought by the New York attorney general allege that the unaccredited “school” mainly helped students part with the money in their wallets. 5 Reasons Why Trump Will Win. Friends: I am sorry to be the bearer of bad news, but I gave it to you straight last summer when I told you that Donald Trump would be the Republican nominee for president.

Donald Trump could become president of the United States and still keep his day job as chairman of the Trump Organization and impresario of all things Trump-branded. He could even promote policies that advance his business interests. Historically, presidents have gone to great lengths to avoid these conflicts of interest, but there’s no law requiring them to do so.