Pinterest is hacked AGAIN as weight loss spam floods site. Users inadvertently posted about weight loss on Pinterest and Twitter On both sites, the messages of ‘An Asian fruit that burns fat for you? 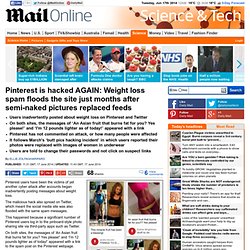 Yes please!’ And ‘I'm 12 pounds lighter as of today!’ Appeared with a linkPinterest has not commented on attack, or how many people were affectedIt follows March's ‘butt pics hacking incident’ in which users reported their photos were replaced with images of women in underwearUsers are told to change their passwords and not click on suspect links By Ellie Zolfagharifard Published: 11:31 GMT, 17 June 2014 | Updated: 11:43 GMT, 17 June 2014. Pinterest Tips and Etiquette on Pinterest. PINTEREST Watch - Curated by Jan Gordon & John van den brink. Pinterest For Business: 12 Simple Tips To Become A Power Pinner.

There are complaints that occasionally make it to my ears… and computer monitor… about how marketers and businesses have “taken over” Pinterest. 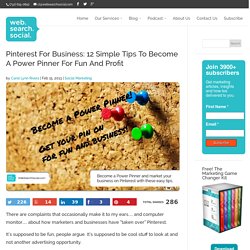 It’s supposed to be fun, people argue. It’s supposed to be cool stuff to look at and not another advertising opportunity. They have a point. Some companies and marketers jump on the trend du jour to promote the heck out of themselves with little regard for the unspoken rules of engagement, namely, “Don’t show up where we’re having fun and throw your selly-sell-mcsell stuff around.” But to capitalize on this popular and visual social network, you don’t have to be the party pooper or that dorky guy with the plaid tie and brochure. In fact, there’s a case to be made that if you have fun first, then sales will follow. So hop on the party train and learn some simple tactics you can use to mix, mingle and make a little money, too. 1. Nobody likes to be advertised to. In other words, have some fun. Try some “behind the scenes” photos, too. 2. 3. 4. 5. 6. Pins Piling Up? 5 Ways to Keep Your Pinterest Boards Clean & Organized.

I know what you're thinking. 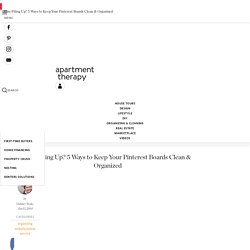 Oh man, aren't there enough things in this world to clean? Now we have to tidy up our Pinterest boards? I'll leave it up to you to decide if it's worth your time, but I spent an hour doing some work on mine the other day, and it felt kind of good. I use Pinterest A LOT these days, so the pins build up quickly. The more current and relevant the boards are, and easy to navigate, the more useful it is as a tool. Here are a few suggestions: Alphabetize Your Boards: If you added up all the minutes you've spent looking for a particular board, you could have written the Great American Novel by now. 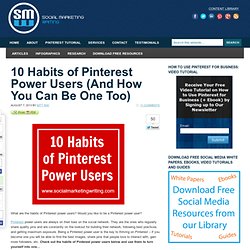 Would you like to be a Pinterest power user? Pinterest power users are always on their toes on the social network. They are the ones who regularly share quality pins and are constantly on the lookout for building their network, following best practices and getting maximum exposure. Pinterest 101: Using Pinterest. The search bar allows to look for pins, pinboards, and Pinterest users, whether you're looking for the latest fashion trends, recipes, or gardening tips. 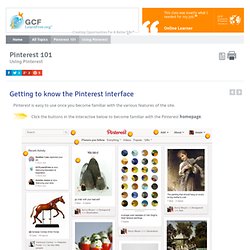 The search bar will also display a quick link to people you follow or your own pinboards if they match a search term. How do i get followers on pinterest. Pinterest has changed Well i will not start that again "Pinterest is fourth largest referral traffic provider", it is one of the biggest social website, you all already know that pinterest has gained vital importance in social websites, but the thing is that the concept of pinterest is really different from other social websites that's why it is a lot more fun on pinterest. 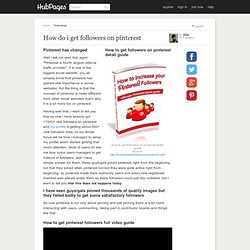 I have seen guys/gals pinned thousands of quality images but they failed badly to get some satisfactory followers So now pinterest is not only about pinning and just pinning there is a lot more, interacting with users, commenting, taking part in contributor boards and things like that. Pinterest Tops 70 Million Users; 30% Pinned, Repinned, or Liked in June [Study]

If you have suspected that Pinterest continues to grow by leaps and bounds, you are definitely correct. 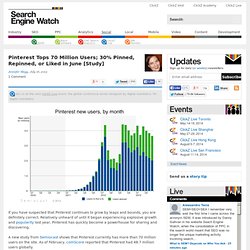 Pinterest Tips for Nonprofits. Pinterest, a social media network that was invitation only until August 2012, is one of the hottest new tools for small businesses and nonprofits. 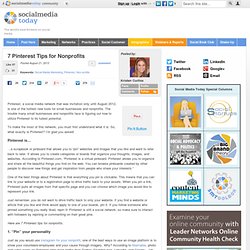 The trouble many small businesses and nonprofits face is figuring out how to utilize Pinterest to its fullest potential. To make the most of this network, you must first understand what it is. The 7 Best Technology Boards You Should Follow On Pinterest. There’s something refreshing about Pinterest. 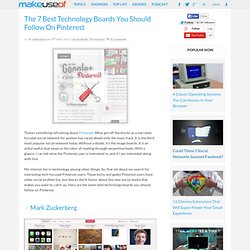 What got off the blocks as a narrowly focused social network for women has raced ahead onto the main track. It is the third most popular social network today. Without a doubt, it’s the image boards. It is an artful eyeful that saves us the labor of reading through serpentine feeds. With a glance, I can tell what the Pinterest user is interested in, and if I am interested along with him. My interest lies in technology among other things. With Rich Pins, Pinterest Begins Working Better With Brands. 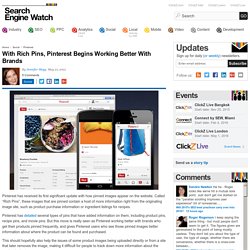 Called “Rich Pins”, these images that are pinned contain a host of more information right from the originating image site, such as product purchase information or ingredient listings for recipes. Pinterest has detailed several types of pins that have added information on them, including product pins, recipe pins, and movie pins. But this move is really seen as Pinterest working better with brands who get their products pinned frequently, and gives Pinterest users who see those pinned images better information about where the product can be found and purchased. This should hopefully also help the issues of some product images being uploaded directly or from a site that later removes the image, making it difficult for people to track down more information about the product in the image. 5 Big Pinterest FAQs. It doesn’t matter who you are—a blogger interested in food and fashion or a B2B marketer working for a custom plastic molding company—you’ve probably been hearing about Pinterest and how it could be good for your brand.

This social phenomenon with skyrocketing popularity rates higher than Twitter, LinkedIn and Google+ combined has become the latest craze for marketers of all kinds, used to increase online exposure and bring in new traffic, as well as connect with others in the industry and enhance a company’s overall image. Pinterest or Porn-terest? What the Social Network Is Doing to Keep It Clean. If you’ve browsed Pinterest’s "Everything" categories, you may have come across a scandalous photo or two. And some of you aren’t happy about it. The question is: Is the highly public nature of the publishing network itself making this issue problematic?

On Friday, we published a poll that asked our community whether they forgave most of Pinterest’s nudity as art, or whether they were offended by nude images in general. We found that the majority of people who have encountered such content consider Pinterest’s nude content art. Turns out, however, that’s not the point. This Is Everything You Need To Know About Pinterest (Infographic) Oh, Pinterest… Over the course of the past few months, what was once a colorful haven for Midwestern mothers and Mormons is now an even more colorful haven for even more pin-tastic peeps. The growth has been staggering, even in what many would call an overly social era. But surrounded by Facebook, Twitter, Google+, etc., Pinterest has really made a name for itself. And while many are scurrying to set up their pinboards for FOMO‘s sake, we in the tech world are curious as to what’s going on behind the scenes. What’s the growth rate? The questions never end, mainly because Pinterest kind of came out of left field and threw the entire model on its head.

Pinterest Tools. Pinterest & Marketing. Pinterest Clones. Pinterest Scams. Pinterest & Copyright. Pinterest's Growth Explosion Continues. According to Experian Hitwise, the Pinterest train keeps rolling and with 21% growth in traffic in Feburary this year, the site has broken into the top 30 for pageviews in the U.S.: Pintererst total US page views increased 21% in Feb-12 & ranks among the top-30 US sites overall in terms of total page views— Experian Hitwise (@Hitwise_US) March 12, 2012 Last month we told you about how Pinterest’s growth may have been breaking records on the web, following a hockey-stick-like growth curve to glory. According to Experian, Pinterest also had 103M visitors from January 12th to February 12th, an increase of 36% during that time period: Pinterest traffic increased 36% in Feb-12 vs Jan-12, the site received more than 103M total US visits— Experian Hitwise (@Hitwise_US) March 12, 2012 The Internet is discussing why and how Pinterest is growing so fast and the answer appears to be good old massive engagement.

Pinterest valued at $1.5bn after just a year as Facebook set for record IPO. By Eddie Wrenn Published: 16:25 GMT, 17 May 2012 | Updated: 07:35 GMT, 18 May 2012 Social networking site Pinterest has already raised $100million from a group of investors in a deal that reportedly values the three-year-old U.S. company at $1.5 billion. The investors, headed by Japanese online retailing giant Rakuten Inc, means the value of the company has shot up at a staggering rate, following a valuation at the end of last year which pegged the company at $200m. Pinterest is an online scrapbook where users can 'pin' images and follow images by other people. It had less than one million users in May 2011 - but that jumped to about 20million by this April, according to comScore.

The homepage of Pinterest website: The company is now being valued at £1.5bn, despite being new to the market Pinterest is the 16th most-visited site in the United States, according to Web information company Alexa. Could Pinterest already be worth $500M? 13 Fun Facts About Pinterest Users (INFOGRAPHIC) Though it launched nearly two years ago, Pinterest has recently taken the internet by storm with its clean, image-heavy interface and fresh take on social networking. The pinboard-style, taste-sharing website recently hit 10 million unique monthly views faster than any standalone site in U.S. history. Pinterest: Behind the Design of an Addictive Visual Network.

Ever find yourself in the rabbit hole of the internet, bookmarking and screengrabbing things you want to buy or images that inspire you? Well, judging from Pinterest's hockey-stick growth, you're not alone in your digital collecting and curating. Pinterest—A Modern-Day Memoir - Robyn Martins. As if I didn’t already spend enough time on the Internet, I have fallen prey to another site and have added Pinterest.com to my daily rounds. I had heard about the site months ago but dismissed it.

Then, I dipped in for a few minutes and was hooked, line and sinker. At Pinterest, users create online bulletin boards categorized by topics such as gardening, art and travel. As a virtual hunter and gatherer, you spot something on the Internet you’d like to share, “pin” it to one of your bulletin boards, and then the related photograph and site link appear on the Pinterest home page for others to see.