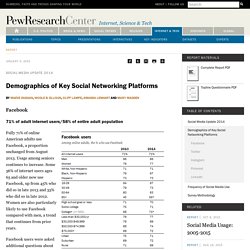 Usage among seniors continues to increase. Some 56% of internet users ages 65 and older now use Facebook, up from 45% who did so in late 2013 and 35% who did so in late 2012. Women are also particularly likely to use Facebook compared with men, a trend that continues from prior years. Facebook users were asked additional questions about their friend networks. Demographics of Key Social Networking Platforms. Will Pinterest Reach Its Potential in 2015? February 25, 2015 |Social Media What Pinterest lacks in size compared with Facebook, Instagram and Twitter, it makes up with marketing opportunities, according to a new report from eMarketer, “Pinterest for Marketers: What You Need to Know.” 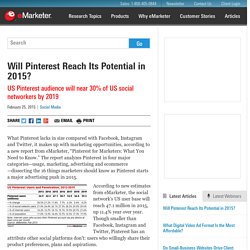 The report analyzes Pinterest in four major categories—usage, marketing, advertising and ecommerce—dissecting the 16 things marketers should know as Pinterest starts a major advertising push in 2015. According to new estimates from eMarketer, the social network’s US user base will reach 47.1 million in 2015, up 11.4% year over year. Though smaller than Facebook, Instagram and Twitter, Pinterest has an attribute other social platforms don’t: users who willingly share their product preferences, plans and aspirations. More than one-quarter of US social network users and 18.1% of internet users will use Pinterest on a monthly basis this year, eMarketer projects. Inbound Marketing: Pinterest-based strategy leads to 77% new site traffic. By Erin Hogg, Reporter Murals Wallpaper produces high-quality, digitally printed and "totally bespoke" wallpaper. 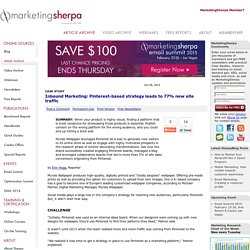 Offering pre-made prints as well as providing the option for customers to upload their own images, this U.K. How to Make Social Commerce More Appealing. Social commerce isn’t new, and Twitter’s recent announcement of an in-tweet “buy” button is yet another effort to fuel customer purchases via social. 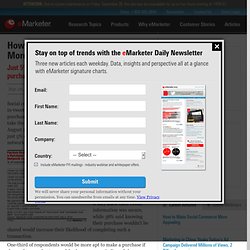 But how many digital buyers in the US actually take the final leap on a social platform? Not too many, according to August 2014 polling by Harris Poll for DigitasLBi, which found that just 5% of US adult internet users had made a purchase on a social network such as Facebook, Twitter or Pinterest. Based on the research, better security measures could motivate social networkers to buy through a social platform. Fully 42% of users said they would be more likely to make a purchase via social if they knew their credit information was secure, while 38% said knowing their purchase wouldn’t be shared would increase their likelihood of completing such a transaction. eMarketer expects the number of US social network users to rise by 4.5% this year and hit 173.2 million people. 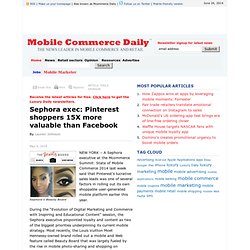 During the “Evolution of Digital Marketing and Commerce with Inspiring and Educational Content” session, the Sephora executive pinpointed loyalty and content as two of the biggest priorities underpinning its current mobile strategy. Most recently, the Louis Vuitton Moet Hennessy-owned brand rolled out a mobile and Web feature called Beauty Board that was largely fueled by the rise in mobile photo-sharing and shopping on platforms including Pinterest and Instagram. WikiHow on Pinterest. Ben & Jerry's on Pinterest. What businesses can learn from TV shows on Pinterest. Pinterest is growing rapidly and so are the kinds of Pins people are looking for, which means there are plenty of things you can add to help people explore all of their interests. 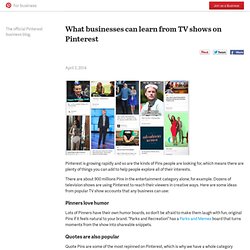 There are about 900 millions Pins in the entertainment category alone, for example. Dozens of television shows are using Pinterest to reach their viewers in creative ways. Here are some ideas from popular TV show accounts that any business can use: Pinners love humor Lots of Pinners have their own humor boards, so don’t be afraid to make them laugh with fun, original Pins if it feels natural to your brand. 10 Must-Know Tips to Leverage Pinterest for Your Business. Pinterest offers perhaps the most unique benefits among all social media platforms. 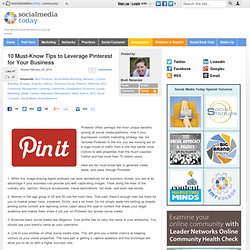 And if your businesses’ content marketing strategy has not factored Pinterest in the mix you are missing out on a huge chunk of traffic from a site that sends more visitors to web properties than the much-vaunted Twitter and has more than 70 million users. Here are ten must-know tips to generate views, leads, and sales through Pinterest. 1. Central Oregon Community College - Bend Oregon. Spring 2014 Marketing and Social Media Classes - COCC Community Learning offers classes on leveraging your business opportunities through the use of social media. 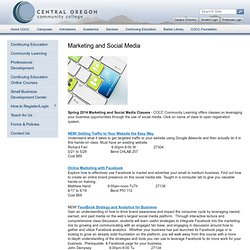 Click on name of class to open registration system. NEW! Getting Traffic to Your Website the Easy WayUnderstand what it takes to get targeted traffic to your website using Google Adwords and then actually do it in this hands-on class. Must have an existing website.Richard Farr 6:00pm-9:00 W 273045/21 to 5/28 Bend CHLAB 207Cost $89. Central Oregon Community College - Bend Oregon. 10 Tips to Get More Followers on Pinterest. In case you overlooked it, Pinterest has accumulated some 500,000 business pages and over 70 million users. 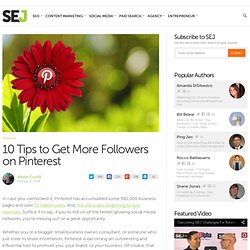 And, the site is also beginning to turn revenues. Suffice it to say, if you’re not on of the fastest growing social media networks, you’re missing out on a great opportunity. Whether you’re a blogger, small business owner, consultant, or someone who just loves to share information, Pinterest is becoming an outstanding and influential tool to promote you, your brand, or your business. Of course, that really doesn’t mean a whole lot if you don’t have many followers. 73% Of U.S. Adults Use Social Networks, Pinterest Passes Twitter In Popularity, Facebook Stays On Top. Facebook may be currently facing question marks over how well it’s faring with younger users, but among those over 18 in the U.S. it remains the social network king. 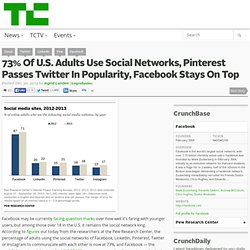 According to figures out today from the researchers at the Pew Research Center, the percentage of adults using the social networks of Facebook, LinkedIn, Pinterest, Twitter or Instagram to communicate with each other is now at 73%, and Facebook — the world’s largest social network with 1.19 billion users — remains the most popular in the U.S., with 71% of U.S. adults using it. In other words, nearly all adults that responded that they are on a social network are using Facebook. That’s four percentage points up from last year’s 67%, Pew notes. It comes at a time of heightened competition: partly thanks to the rise of mobile apps — the number of people on multiple networks is now at 42%. Among the top five networks (as charted by Pew), there is a lot more wiggle room for who comes in second after Facebook. How Much Is A Pinterest Pin Worth? Much More Than A Tweet.

We know just how much Pinterest has been valued at--$3.8 billion--but how much is a pin on the social media cork board worth to brands? Social media marketing and analytics firm Piqora thinks it has the answer, after undertaking a nine-month study of more than 1,000 brands on the site. Stats please, Margery. How to Use Pinterest Rich Pins: What Marketers Need to Know. Do you use Pinterest for your business? Have you heard about Pinterest Rich Pins and how they can help your marketing? In today’s post, I’ll show you how businesses can get more from Pinterest Rich Pins. Get to Know the New Pins Pinterest is continuously expanding their functionality for businesses, from creating business accounts to marketing materials to help businesses get more from Pinterest.

The latest additions to Pinterest are the introduction of rich pins to include more information about pinned images and the integration of the Pin It button with mobile apps. There are three types of pins that now allow you to share more information: products, recipes, and movies. 5 Insights on Facebook vs Pinterest in Driving Sales - Infographic. Pinterest has been grabbing the headlines recently as its network approaches 20 million users per month. In March, Compete.com reported that Pinterest had received 18 million unique visitors with AppData reporting that the visual social network had received a record 4.4 million daily active users on March 18. There are reports that Pinterest’s growth is slowing but just like Twitter and Facebook, reports of its demise maybe slightly premature. The Power of “Low Friction” Photo Sharing. How To Add A Pin To Pinterest - What Is Pinterest? Shareaholic: Pinterest Tops Social Media Referrals. Pinterest has garnered the most referrals among major social media sites in the past year, according to a recent Social Media Traffic Report by Shareaholic.

Data was collected over 13 months from 200,000 publishers who reach more than 250 million unique monthly visitors. YouTube and LinkedIn are also showing growth in referrals since the same time last year. Meanwhile, referrals from StumbleUpon and Reddit are both on the decline, according to the report. Click here for the full data findings in the report. Anna Helhoski Anna is the Content Manager at GSMI. Pinterest Lead Generation 101: Best Practices and Hacks That'll Make You a Pro. In marketing, there's still a huge misconception about Pinterest.

Some marketers think that it's useless -- just another fad network that people are getting in a tizzy about. But that's not quite accurate any longer. While Pinterest may not be perfect for every marketer in every industry, it does offer a huge opportunity for most. It has more than 70 million users and a growing international population.

3 Creative Ways Brands Are Using Pinterest. Pinterest Marketing: What Marketers Need to Know to Succeed. 6 Tips for Using Pinterest for Business. Pinterest, How to Use Pinterest to Drive More Traffic. Pinterest reveals promoted pins. Pinterest Launches Search Feature by Keyword for Your Pins. Pinterest is launching all sorts of goodies this year, with its "Rich Pins" and analytics offering, which served as one big move to help marketers and users alike. Pinterest Introduces Rich Pins for Better Brand Collaboration. Pinterest Tops Facebook in Driving Ecommerce. If you can't stop yourself from buying accessories, clothes, handbags, apartment decor and recipe ingredients after seeing them all in pins, you're not alone.