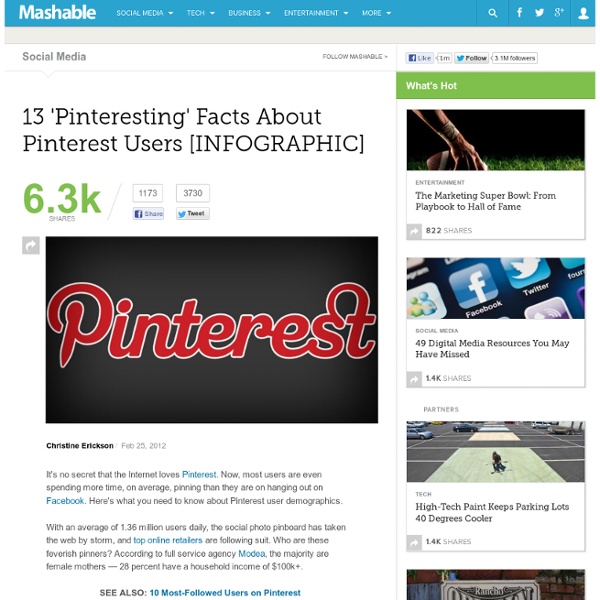 It's no secret that the Internet loves Pinterest. Now, most users are even spending more time, on average, pinning than they are on hanging out on Facebook. Here's what you need to know about Pinterest user demographics. With an average of 1.36 million users daily, the social photo pinboard has taken the web by storm, and top online retailers are following suit. SEE ALSO: 10 Most-Followed Users on Pinterest Using stats from comScore and a few other analyses, full service agency Modea has put a few interesting facts about Pinterest into visual form with this infographic.

Who's Using Pinterest? Yup, It's Mostly Ladies Well, there's a reason it's not called Dude-terest. The latest darling of the up-and-coming social sharing space, Pinterest, has experienced rapid growth in both users and industry buzz in the last few months. If you had a sneaking suspicion that the majority of those users happen to be young females, you were right. Pinterest's users are 80% women, according to recent data from Google Ad Planner, as presented by Ignite Social Media. There's nothing inherently female-centric about Pinterest. Gizmodo described the service as a sort of "Tumblr for ladies" and cited internal staff discussions in which the men expressed confusion and uncertainty and the women expressed enthusiastic approval. Here at ReadWriteWeb, the guys are a little more receptive to the Pinterest and its potential use cases. Personally, I've been using Pinterest somewhat passively for a few weeks, checking in semi-regularly and periodically pinning stuff. I'm still waiting for that "Ah ha!"

Here's the Best Time to Share on Pinterest If you’re doing most of your sharing on Pinterest from the office, you’re doing it wrong. The best time to share things on Pinterest is Saturday morning, according to data from Bitly, the URL shortening service. Hilary Mason, Bitly’s chief scientist, revealed the nugget during a talk at Mashable Connect in Orlando, Fla. Bitly keeps track of clicks on the links created by its users, and where they’re coming from, aggregating the data to create actionable information. In addition to the Pinterest factoid, Mason said a story’s half-life — the time it takes to receive half the clicks it will ever get — lasts 2.8 hours on Twitter, 3.1 on Facebook, 7 hours on YouTube and “longer” on StumbleUpon and Tumblr. Bitly also looks at usage of devices. SEE ALSO: Behind the Design of Bit.ly’s Iconic Pufferfish Typically, content follows a “burst and decay” pattern, with a huge spike of clicks early in its life cycle that drops off rapidly, then slowly. Facebook YouTube Soundcloud LinkedIn Twitter Blogspot Vimeo

Pinvolve Converts Facebook Pages Into Pinterest Pinboards, Increases Repins By 150%+ The folks behind a forthcoming fashion catalog for the iPad, Bazaart, have launched an interesting side project in their downtime (what’s that?) from their participation in DreamIt’s new Israel-based startup accelerator program. In need of something similar for themselves, the company launched a Facebook app called “Pinvolve” which converts Facebook Pages into Pinterest pinboards. To use Pinvolve, you have to first be logged into Facebook as one of the page’s admins before installing the app. Once up-and-running, Pinvolve creates a new section on your Facebook page which presents all your photo posts in a Pinterest-like fashion – that is, in the typical image pinboard style that’s now associated with the popular social networking service. The app also pulls in the Facebook likes and comments associated with each post, as well as the comments’ text. You can see an example of Pinvolve in action now, over on fashion model, blogger and designer Audrey Kitching’s Facebook Page here.

5 Ways to Be Pinworthy 2012 is the year of the image, particularly photographs. At the heart of this trend is Pinterest, an image-based social media network that’s experienced explosive growth in the last six months. For marketers, Pinterest’s power is clear. Pinterest by the Numbers Pinterest reached over 18 million unique visitors in March, according to Compete and reported by TechCrunch. New Pinterest members are less active. Pin sources show a long-tail distribution. 5 Tips to Be Pinworthy What do these Pinterest trends mean for marketers? Create great images. If you haven’t been pinned, don’t wait for your boss to ask you about that new trend. What other tips do you have for making your images pinworthy? Happy marketing, Heidi Cohen

YouTube Joins Pinterest: Here's What It's Pinning YouTube is getting in on the Pinterest action — by launching an account of its own, the online video company announced Thursday. Videos will be posted to one of several Pinterest YouTube boards themed around topics including crafts, lifestyle tips, beauty, food and fitness. YouTube says it will also have numerous additional boards categorizing the videos it posts. In Thursday's post on YouTube's blog, the company points out that it already has accounts on other major social networking sites including Facebook, Google+ and Twitter. Pinterest made video pinning available in August 2011; its users have been pinning videos from YouTube since that time. It makes sense that the video sharing site — which gets 72 hours of video uploaded every minute — would want to leverage Pinterest's large and growing following of reportedly up to 21 million unique visitors per month. Pinterest was one of the fastest growing social networks ever this spring. Was YouTube smart to start a Pinterest account?

Pinterest Gives Copyright Credit to Etsy, Kickstarter, SoundCloud After Pinterest's trove of copyrighted content became the subject of a legal debate, the popular social site made efforts to automatically add citations to content from specific sources. On Wednesday, it announced that it had expanded this practice to five new sites. Since May, the feature had added citations to any content Pinned from Flickr, YouTube, Behance or Vimeo. Now content Pinned from photography community 500px, Etsy, Kickstarter, Slideshare and SoundCloud will enjoy the same automatic citations — which can't be edited. Although Pinterest's Terms of Use prohibit its members from posting copyrighted material without permission, it doesn't take more than a quick look at the site to notice that most of its content violates these terms. Some have suggested that the large amount of copyrighted, unattributed content that has been copied to Pinterest's servers creates a legal problem for the site. But attribution isn't instant permission to use copyrighted content.

Who's Using Pinterest Anyway? [INFOGRAPHIC] Have you ever wanted to know exactly who is using Pinterest? Here's a quick snapshot: Pinterest users are three times more likely than average Internet users to have visited Disney World in the past year. Their favorite magazine is Good Housekeeping. More than half of them have drank alcohol in the past month. They text and email from mobile phones and use mobile apps more often than average Internet users. Digital media agency Modea put together this infographic with findings from a February comScore report. SEE ALSO: 13 ‘Pinteresting’ Facts About Pinterest Users [INFOGRAPHIC] Take a look at Modea's findings and let us know how do you compare to other Pinterest users.

Pinterest to drive 40 percent of all social media purchases The extent of the social pinboard’s increasing influence may surprise you. By Regina Wood | Posted: June 25, 2012 Facebook and Twitter, make room. According to an infographic by Tamba, Pinterest will account for 40 percent of social media driven purchases by the end of this year. Here are more stats on the rising power of Pinterest: Buyers referred from Pinterest are 10 percent more likely to buy something and spend 10 percent more than visitors from other social networks. Popularity: This record has been viewed 21135 times.

Pinterest A Bit Player In Referral Traffic, Unless You're In Retail Based on traffic trends for more than 200,000 publishers, Pinterest referral traffic showed "explosive growth" in June, beating out Twitter, StumbleUpon, Bing and Google referral traffic. That according to content measurement provider Shareaholic. The company pays close attention to all social media, but in January observed that Pinterest sent more referral traffic than Google+, LinkedIn and YouTube combined. In February, Pinterest overtook Twitter for share of traffic. It is important to note that Pinterest beats Google in referral traffic, not from organic search or AdwWords. As TechCrunch observes, content creators cannot ignore Pinterest for SEO, but “it’s not a replacement for keyword building by any means”—not when Google organic traffic counts for nearly half of referrals. Yeah, But What About Ecommerce Referrals? Of course Google organic search trumps Pinterest in referral, but so what.

Pinterestification! Sociable Labs Signs Up Wine.com, 19 Others For Its Pinterest-Like EverShare Offering The Pinterest effect on e-commerce sites continues: online wine retailer Wine.com, a company with $67 million in annual revenue, is adding a social shopping component to its website which not only looks like Pinterest, but is also powered by Facebook. Wine.com says it’s using technology provided by Sociable Labs, a San Francisco-based startup which introduced its licensable “EverShare” product suite earlier this year. But while Wine.com’s change is a notable one for them, the bigger story here is the traction that Sociable Labs is seeing, thanks to the “Pinterestification” (not a real word!) of e-commerce. As a refresher, EverShare lets companies host their own Pinterest-style product pages on their websites, while also connecting with Facebook APIs to allow things like purchases, comments, and reviews to be shared with customers’ Facebook friends. But rollouts like this are risky. Should Retailers Go “Pinterest-Like” Or Pinterest Proper? Workarounds For The Pinterest Problem