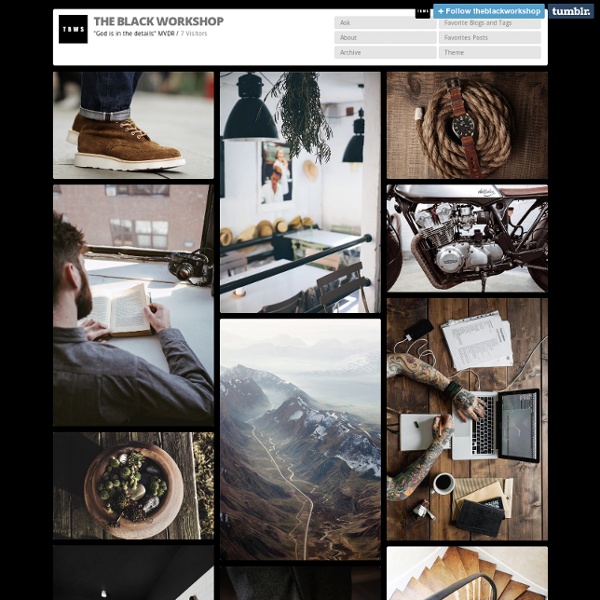 Information Design Watch December 14, 2011, 9:57 am Game Theory, Starring the Bowerbird By Henry Woodbury I fucking wish AGAINST ALL AUTHORITYMXDVS for C2H4 Desert MA-1 Jacket, C2H4 Riot Patch Jeans, C2H4 Photographed by Sandro D.B. jalopnik Wouldn't beat yourself up for not knowing or finding it. It's about 5 to 6 miles south of town down US-41/Murfreesboro Rd. Not exactly the best area and definitely not a place you'd go while visiting and just happen to spot it. I'm not beating myself up about it... I usually try to find diversions while traveling... This is _totally_ something I would scout out... The beautiful apartment of a jewellery designer... A colourful mix of classic design and flea market finds What lovely inspiration :)

25 must-see examples of kinetic typography Kinetic typography can come in all shapes and forms. Whether it's a homage to a famous movie speech or song or an exploration of the typography itself, these creations are a feast for the eyes. Here, we've picked our favourite kinetic typography animations including music videos, movie tributes and more... 01. From Paper to Screen This masterpiece was, unbelievably, a graudation project created by graphic designer Thibault de Fournas.

there is nothing new under the sun. takeovertime: Amazin Apartment | Industrial FacilityA minimal concept created by London-based design company Industrial Facility. According to the designers, despite the implicit promise of digital technology to make our lives simpler and easier, there is a crisis afoot for the growing, older population. Although many household appliances are easily acquired, these same products are inherently difficult to manage and maintain over time; what was once purchased as a convenience has potential to become a burden in later life. As we age, we become less likely to navigate the conditions that shops and manufacturers require of youthful consumers.

Scandinavian Modern Just how much credit you have depends on age and current condition of your old cellphone. You possibly can modify your alert tone to your unique sound which you prefer. This particular eliminates the necessity to tap typically the “x” to move through word to term. Officially announced and also released on October 2008, Apple iphone 5 comes well integrated numerous exciting features that comprise 8 mp camera, high-end sensors and a lot of additional features. It’s buggy since, it did strange things like double picking, printing blank webpages, crashing in choosing a dozen pictures.

El Lissitzky El Lissitzky El Lissitzky was a Russian born artist, designer, typographer, photographer and architect who designed many exhibitions and propaganda for the Soviet Union in the early 20th century. His development of the ideas behind the Suprematist art movement were very influential in the development of the Bauhaus and the Constructivist art movements. 10 Infographics That Will Teach You About Typography Typography is a crucial component of great designs involving text, so knowing as much as you can about it is an important step to becoming a great designer. This roundup of infographics will help you discover new and interesting things (as well as reinforce and reiterate stuff you already know) about typography. Click the Go to Source link under each infographic to navigate to the source of the infographic and to see the larger version provided by the creator of the infographic. 1. Bold & Justified: The Huge World of Typography Infographic Did you know that Israel is the source of the most expensive typefaces?

Sketchbook Secrets: 50 Beautiful Sketchbook Scans The sketchbook is—to borrow a term from the new millenniums’ popular discourse—an artist’s BFF. It’s a diary for the visually inclined—a place where artists can most comfortably explore their personal thoughts, work out their visual needs, practice, maintain a visual history, and hopefully create the unpolished work that will eventually lead to amazing work for the world to see. But, sometimes, when we’re lucky, we get to see the process. Below are 50 beautiful sketchbook scans from 35 talented artists. Allen Sutton Mattias Adolfsson An escape into the realm of imagination An escape into the realm of imagination “Alexander Brodsky and Ilya Utkin are the best known of a loosely organized group of Soviet artists known as Paper Architects, who designed much but built little in the early days of Glasnost in the late 1980s.” (Amazon)

a home in copenhagen This beautiful home in Copenhagen, Denmark, is featured in the April issue of Bolig Magasinet. I love the light and white clean look combined with some colorful accessories. Also, the grey wall in the bedroom is gorgeous! (images by Peter Kragballe / styling by Camilla Tange / found via La Maison d’Anne G)