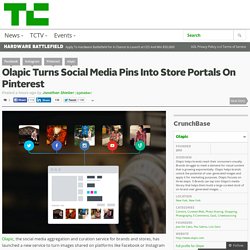 Using Olapic, brands can share linked photos on Pinterest that will bring a user back to a product page for the store, rather than the social media service from which the original image was shared. The company does this by managing all of the steps associated with acquiring permission to re-use the content and then coding that content to link back to the store, instead of a site like Instagram or Facebook. “Consumers today live in an omni-channel world in which they value authenticity over stylized stock imagery, and seek new ways to engage with brands across social channels,” said Pau Sabria, chief executive and co-Founder of Olapic, in a statement.

Pinterest Redesigns Its Profile Pages. Pinterest today rolled out a minor redesign to its user profile pages, making profile photos round instead of square. 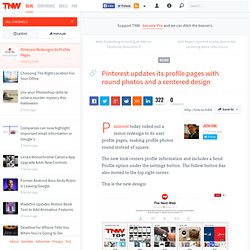 The new look centers profile information and includes a Send Profile option under the settings button. The follow button has also moved to the top right corner. This is the new design: Here’s what it looked like before: Strategic Minimalism to Boost Instagram Engagement. Eric Dahan is co-founder and CEO of InstaBrand, the Web’s premier Instagram/Vine influencer platform. 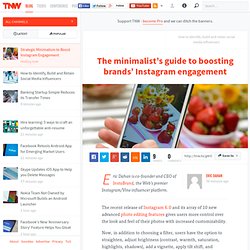 The recent release of Instagram 6.0 and its array of 10 new advanced photo editing features gives users more control over the look and feel of their photos with increased customizability. Now, in addition to choosing a filter, users have the option to straighten, adjust brightness (contrast, warmth, saturation, highlights, shadows), add a vignette, apply tilt shift, and sharpen an image. This is a big shift for the photo-sharing platform originally hailed for its streamlined UI and straightforward, user-friendly photo editing tools. For brands hoping to utilize Instagram as an organic, grassroots means to engage new and existing followers alike, this new Insta-release means re-evaluating whether more customizability means more or less success when it comes to launching and maintaining profitable Instagram campaigns. 1. 2. 3. Consistency is everything. 4. 5. What are you waiting for? Pinterest Opens Its Platform to Third-Party Marketing Providers. Mashable. Pinterest's ad program may be less than a week old, but the company certainly isn't having cashflow issues. 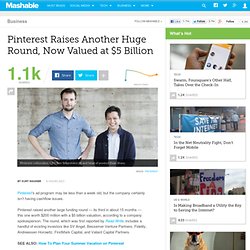 Pinterest raised another large funding round — its third in about 15 months — this one worth $200 million with a $5 billion valuation, according to a company spokesperson. The round, which was first reported by Read Write, includes a handful of existing investors like SV Angel, Bessemer Venture Partners, Fidelity, Andreessen Horowitz, FirstMark Capital, and Valiant Capital Partners. Pinterest already raised two $200 million-plus rounds in 2013, including $225 million last October, a round that valued the company at $3.8 billion. Mashable. In what must count as one of the strangest protests ever seen on the streets of San Francisco's startup-filled SOMA district, Greenpeace activists surrounded Pinterest HQ Tuesday morning and ... gave employees free Blue Bottle coffee and cupcakes with the Pinterest logo on them. 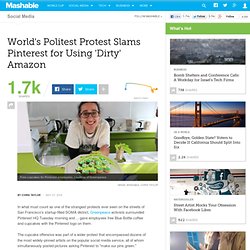 The cupcake offensive was part of a wider protest that encompassed dozens of the most widely-pinned artists on the popular social media service, all of whom simultaneously posted pictures asking Pinterest to "make our pins green. " The problem, as Greenpeace sees it, is that Pinterest hosts its pins on Amazon Web Services — which was called out last month in Greenpeace's report on cloud computing, "Clicking Clean. " Apple, Google and Facebook have made tremendous strides towards powering their server farms with as much renewable energy as possible; they have both constructed their own solar and wind farms and forced utility companies to provide renewable power options. 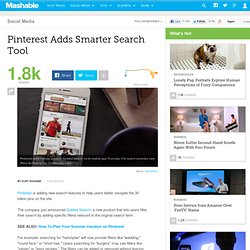 The company just announced Guided Search, a new product that lets users filter their search by adding specific filters relevant to the original search term. For example, searching for "hairstyles" will now provide filters like "wedding," "round face," or "short hair. " Users searching for "burgers" may see filters like "vegan" or "easy recipes. " The filters can be added or removed without leaving the search results page, and appear on mobile as visual tiles below the search bar. The hope is that users will come across more relevant content, as well as discover new content they didn't even know they were looking for, says Pinterest CEO Ben Silbermann. Part of what made the expanded search necessary is the total number of pins on the platform.

Guided Search isn't the only way the company is hoping to identify new content for its users. 6 Ways to Use Pinterest to Promote Your Brand. Is Pinterest part of your marketing strategy? 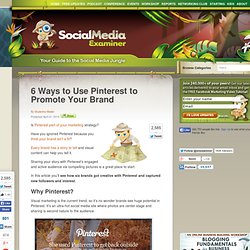 Have you ignored Pinterest because you think your brand isn’t a fit? Every brand has a story to tell and visual content can help you tell it. Sharing your story with Pinterest’s engaged and active audience via compelling pictures is a great place to start. In this article you’ll see how six brands got creative with Pinterest and captured new followers and interest. 6 Ways to Promote Your Business With Pinterest Places. Pinterest Joins Other Social Giants, Provides First Transparency Report. Pinterest on Friday unveiled the company's first transparency report, a document detailing the number of information requests Pinterest received in the past six months from both state and federal government agencies. 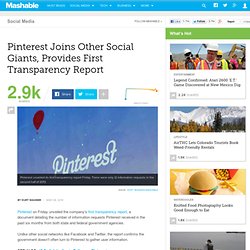 Unlike other social networks like Facebook and Twitter, the report confirms the government doesn't often turn to Pinterest to gather user information. In the six months from July to December in 2013, there were only 12 government requests, including none from agencies outside the United States. Only one of the requests was from a federal agency, and Pinterest produced information for 11 of the 12 requests. Pinterest For iPad Adds Place Pins, iOS And Android Apps Get Animated GIFs.

8 Incredible Museums Sharing on Pinterest. Pinterest has a reputation as the social media channel for food and fashion, but there’s much more to the visual network. 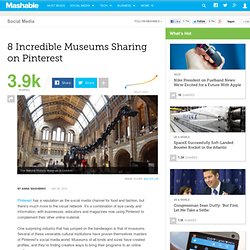 It’s a combination of eye candy and information, with businesses, educators and magazines now using Pinterest to complement their other online material. One surprising industry that has jumped on the bandwagon is that of museums. Several of these venerable cultural institutions have proven themselves masters of Pinterest’s social media world. Pinterest Is Experimenting With GIFs. You may soon be pinning GIFs alongside your favorite meals and workout photos. 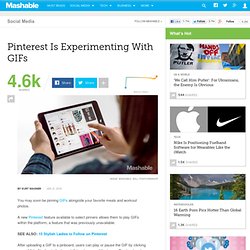 A new Pinterest feature available to select pinners allows them to play GIFs within the platform, a feature that was previously unavailable. After uploading a GIF to a pinboard, users can play or pause the GIF by clicking a small "play" button in the lower left-hand corner of the image. Previously, when users uploaded GIFs to Pinterest, they appeared as still images unless users followed the link back to the GIF's original source outside of the platform.

A Pinterest spokesperson has confirmed that the company is testing out the new feature.