Spotify “Discover Weekly” Personalized Playlists. I was worried about the Minions. 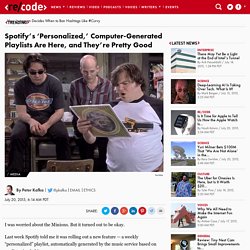 But it turned out to be okay. Here Are the Internal Documents that Prove Uber Is a Money Loser. SecondLife Didn’t Fail. By Sarah Lacy On July 6, 2012 Last night I spoke at an event put on by a site called IdeaMensch. 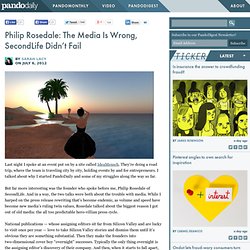 They’re doing a road trip, where the team is traveling city by city, holding events by and for entrepreneurs. I talked about why I started PandoDaily and some of my struggles along the way so far. The Truth About That ‘Landmark’ Twitter Case - Twitter. This weekend The Telegraph reported that Twitter had revealed the name, email address and telephone number of Ahmed Khan, a UK council whistleblower accused of libelling his local authority using a number of anonymous twitter accounts and blog Mr Monkey. 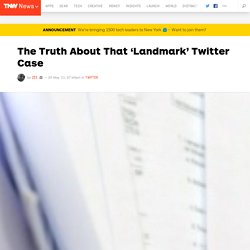 The council in question, Tyneside, took the case to the legal superior court of California, which in turn issued a subpoena to Twitter on April 14th 2011. According to Khan, what Twitter handed over was “just a great long list of numbers” and ordered it to hand over 30 pieces of information relating to several Twitter accounts, including @fatcouncillor and @ahmedkhan01. According to Khan, this included “all private messages sent by other whistleblowers exposing wrongdoing in the council.” On April 15th Khan was notified by Twitter of the subpoena and was asked if he wanted to dispute it in court. He declined. This is key. Khan elected not to contest the subpoena. New Social Networking Site Changing The Way Oh, Christ, Forget I. NEW YORK—While millions of young, tech-savvy professionals already use services like Facebook and Twitter to keep in constant touch with friends, a new social networking platform called Foursquare has recently taken the oh, fucking hell, can't some other desperate news outlet cover this crap instead? 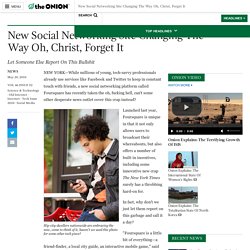 Hip city-dwellers nationwide are embracing the new, come to think of it, haven't we used this photo for some other tech piece? Launched last year, Foursquare is unique in that it not only allows users to broadcast their whereabouts, but also offers a number of built-in incentives, including some innovative new crap The New York Times surely has a throbbing hard-on for. In fact, why don't we just let them report on this garbage and call it a day? Added Crowley, "[Who gives a shit]. " Airbnb Victim Speaks Again: Homeless, Scared And Angry. Yesterday we wrote about “EJ,” a woman who had her San Francisco apartment burglarized and vandalized by someone who rented her home for a week via Airbnb. 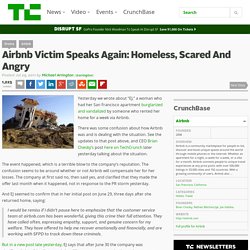 There was some confusion about how Airbnb was and is dealing with the situation. See the updates to that post above, and CEO Brian Chesky’s post here on TechCrunch later yesterday talking about the situation. The event happened, which is a terrible blow to the company’s reputation. The confusion seems to be around whether or not Airbnb will compensate her for her losses. Paris Diary: The International Geek Brotherhood... Posted by Tom Foremski - December 7, 2009. 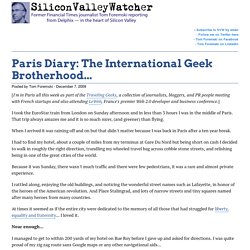 Consumer - Wikipedia. Consumers buying fruit in Nanjing, China In economic systems consumers are utilities expressed in the decision to trade or not. 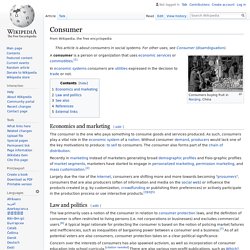 Economics and marketing[edit] Recently in marketing instead of marketers generating broad demographic profiles and Fisio-graphic profiles of market segments, marketers have started to engage in personalized marketing, permission marketing, and mass customization.[2] Largely due the rise of the Internet, consumers are shifting more and more towards becoming "prosumers", consumers that are also producers (often of information and media on the social web) or influence the products created (e.g. by customization, crowdfunding or publishing their preferences) or actively participate in the production process or use interactive products.[3][4][5] Law and politics[edit] Concern over the interests of consumers has also spawned activism, as well as incorporation of consumer education into school curricula.

See also[edit] References[edit] External links[edit] U.S. Medium pivots and lays off one-third of its team. Medium announced it is changing business models in a bid to salvage its original mission, but in doing so, it has to lay off 50 employees, or one-third of the workforce. 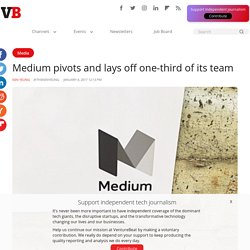 The departures come from “sales, support, and other business functions”. The move was driven by the company’s recognition that it didn’t have the right solution for monetizing based on its content. Twitter Is Betting Everything on Jack Dorsey. Will It Work? “I ’m leaving the company in two weeks,” Dick Costolo said abruptly, his face stricken, his fingers banging the wood-slab table before him. 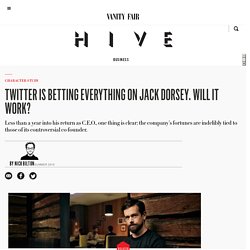 Costolo, the bald and lithe chief executive of Twitter, was sitting in the Waterthrush conference room on the 11th floor of his company’s headquarters, in the old Western Furniture Exchange and Merchandise Mart, in downtown San Francisco. As the words left his mouth, Costolo’s nine top lieutenants, his so-called Operating Committee, looked up from their iPads and smartphones, stupefied. Off in the distance, the F-Market tram could be heard screeching to a halt; Ubers were pulling over to deposit product managers at Twitter’s Art Deco lobby.