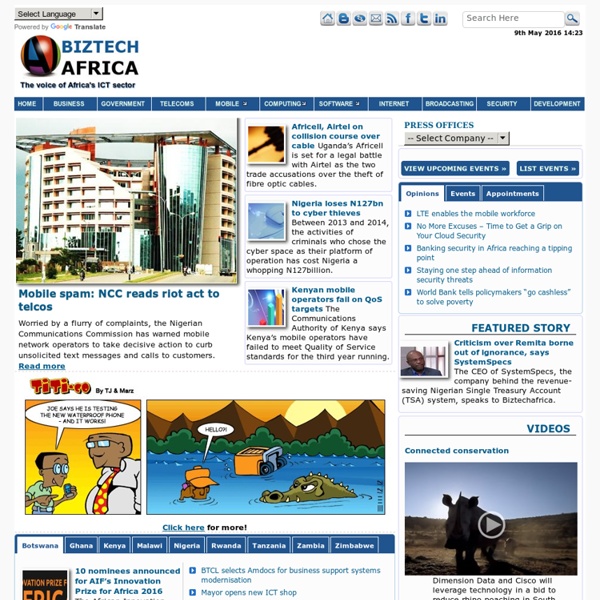 ReConnect Africa | Africa Magazine Online | The magazine on Jobs, News, Information and Business in Africa Juliet Ibrahim begins 2014 with risqué role (VIDEO) | AfricanMoviesNews.com - The latest African movies and celebrity news The new year has ushered in different perspectives for Nollywood stars. For actress Juliet Ibrahim, it’s all about being risqué and trying out new roles she dared not for the past years. The latest movie she has featured in which is scheduled for release this year titled “RAIN” features her as in a quite inordinate role. The movie, which features movie stars like Dan Tei Mensah, Eddie Nartey, Niki Samonas, George Dickman and others, is said to be a very educative movie but, with lots of hardcore and graphic scenes; Juliet Ibrahim lustfully playing a lesbian role as she kisses Niki Samonas, whilst Eddie Nartey played a gay role with his partner being George Dickman. Educative indeed!

MyBroadband Tech and IT News Technology Magazine | Technology News | Social Media, Smartphones, and Gadgets | Technology Digital Rwanda: 2013 - Film, Music Festivals in Review Last year, the Rwandan film industry saw a number of films being produced in the country, while other filmmakers made their names abroad. The most famous one to be produced in Kigali was the love movie, 'Anita' which was followed by its sequel, 'Anita II'. A number of popular actors featured in the movie including Willy Ndahiro and Danny Gaga, among others. 'Anita' was launched in a colourful ceremony held at Sports View Hotel and graced by local musicians Urban Boyz and Jay Polly in September, while 'Anita II' was launched in November. The year also saw Rwandan actor Ddjoli Kayitankore, aka Kayombya launch his movie, 'Bwenje Naguhenze' in Belgium in November. "I want to give Kanyombya and other artistes a chance to prove to Rwandans in the Diaspora and foreigners that Rwanda's movie industry is steadily growing," said Bizimana. Kayombya said: "I am excited to screen my movie in Belgium and I can promise people there that, Bwenje Naguhenze is a great movie," just before its launch.

IT News Africa - Technology, Telecom, Mobile and Gadgets news, analysis and reports 2014 PGA Awards - Producers Guild of America One of the awards season’s marquee events, the Producers Guild Awards celebrates the finest producing work of the year, and gives the Guild an opportunity to honor some of the living legends who have shaped our profession. Considered a strong prognosticator for the Best Picture Oscar®, the announcement of the Guild’s Darryl F. Zanuck Producer of the Year Award in Theatrical Motion Pictures is one of the most eagerly-anticipated of the season. The list of recipients of honorary awards such as the Milestone Award, the David O. Held in January, the Producers Guild Awards is a must-attend event for the industry, and represents a unique chance for PGA members to extend their network, support their Guild, and pay tribute to the best of their profession. - For updates on nominations, visit our PGA Awards News

A Guide to Pay Windows for TV & Movies What's the difference between the first and second pay windows? And what about the Buy vs. Rental window? Here's the lowdown. We've been hearing a lot about "pay windows" over the past few months. At the same time both Lovefilm and Netflix have been doing deals with the studios so that they can stream TV shows and films in the "second pay" window - around 6 months after the first pay window. Lines are blurring and the terminology can get confusing so here's our first-draft guide to pay windows for TV and movies in some sort of chronological order. 1. This is nice and straightforward. 2. Did you think that the DVD window would come straight after the theatrical window? 3. The DVD Buy window is, as the name suggests, the time when you can buy the DVD of a movie that was lately on at the theatre. 4. You might think as soon as a DVD is available to buy you'll be able to get down to your local Blockbuster and pick it up for rent immediately. 5. 6. 7. 8.

10 Ways to Successfully Promote Your Short Film Did you know... Historically, The Digital Animation & Visual Effects School (DAVE School at Universal Studios Orlando) has placed a fair number of its graduates in the gaming industry, but now they have a new program specifically designed for careers in gaming. The program was designed and is overseen by a senior production supervisor who led teams on Ghostbusters and Kinect Star Wars. Congratulations! But how exactly does one do that? You could always hire someone to do it for you. Of course, you need to do it yourself! Apply these 10 ideas into your promotional plan and you will have reach 10,000+ views in no time. 1. To start promoting your film, there needs to be a “home base”. Don’t feel like you have to go flashy. When thinking about design and color scheme, have it represent the film. Once you have the site up, submit it to sites like Digg and Del.icio.us to get a wider viewing audience and high search engine hits. 2. Who knows? 3. 4. Create a Facebook fan page and Twitter feed.