Toyota, Suzuki and CFAO announce a joint venture to produce cars in Ghana. Subscribe to read. GCC plastic manufacturers look to new markets including Africa. Amid intensifying global and regional competition, GCC plastics producers are turning to new frontier markets including in Africa. 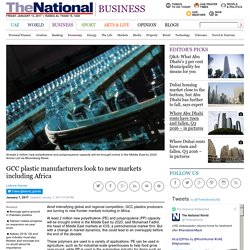 At least 2 million new polyethylene (PE) and polypropylene (PP) capacity will be brought online in the Middle East by 2020, said Muhamad Fadhil, the head of Middle East markets at ICIS, a petrochemical market firm. Sumitomo Electric to establish 2nd factory in Egypt worth of EGP200m. Japanese company Sumitomo Electric Industries will invest in Egypt through establishing a factory in 6th of October City with a total investment of EGP 200m. 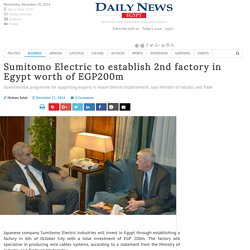 The factory will specialise in producing wire cables systems, according to a statement from the Ministry of Industry and Trade on Wednesday. The factory would produce electric braids, as part of the company’s plans to expand its investments in the Egyptian market. The statement said that the factory will create almost 1,000 jobs, and will start operating within three months. Minister of Industry and Trade Tarek Kabil said during a meeting with COO of Sumitomo Europe Kevin Phillips that the company’s decision to invest in Egypt was a fast, positive reaction to the ministry’s commitment to the successful governmental programme of supporting exports announced in April. The programme provides 50% more subsidies for any company that increases its exports by 25% in the engineering, chemical, food, and textile industries.

Tanzania: Japan to Help Establish Car Factories. By Marc Nkwame JAPAN, the country commanding the largest share of motor vehicles populating the entire globe, is committing itself to assist Tanzania and the other East African Countries to start manufacturing cars locally. 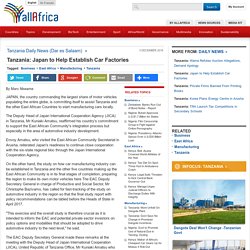 "This exercise and the overall study is therefore crucial as it is intended to inform the EAC and potential private sector investors on policy options and modalities that should be adopted to drive automotive industry to the next level," he said. Algérie : une entreprise émiratie va développer une aciérie dans le nord du pays pour 1,6 milliard de dollars. 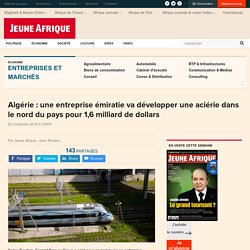 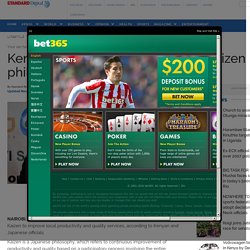 Kaizen is a Japanese philosophy, which refers to continuous improvement of productivity and quality based on a participatory process involving the entire workforce. In September last year, with the support of JICA, the Kenyan government launched a training program aimed at empowering local Small Medium-sized Enterprises (SMEs) using Japan’s experience accumulated from the rapid economic growth of the giant Asian economy. Addressing participants of a one-day seminar in Nairobi, Dr. Chris Kiptoo, Kenya’s Principal Secretary, State Department of Trade, Ministry of Industry, Trade and Cooperatives said most local small businesses lacked the efficiency and competitiveness necessary for growth. Rwanda: Indian Investors to Inject U.S$1 Million in Manufacturing Sector. By Collins Mwai Local manufacturing sector is set to get a boost following a $1 million (about Rwf785 million) investment commitment by an Indian-based firm seeking to produce laundry and detergent products in the country. 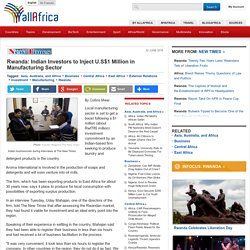 Aroma International is involved in the production of soaps and detergents and will soon venture into oil mills. The firm, which has been exporting products to East Africa for about 30 years now, says it plans to produce for local consumption with possibilities of exporting surplus production. In an interview Tuesday, Uday Mahajan, one of the directors of the firm, told The New Times that after assessing the Rwandan market, they had found it viable for investment and an ideal entry point into the region. Japan helps Angola restore textile and apparel sector. Japanese international trading house Marubeni Corp has teamed up with US based clothing and textile management consultants Werner International in rehabilitating a textiles factory in Angola to produce denim and knitwear products. 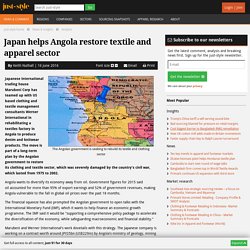 The move is part of a long-term plan by the Angolan government to restore its clothing and textile sector, which was severely damaged by the country's civil war, which lasted from 1975 to 2002. Angola wants to diversify its economy away from oil. Government figures for 2015 said oil accounted for more than 95% of export earnings and 52% of government revenues, making Angola vulnerable to the fall in global oil prices over the past 18 months. 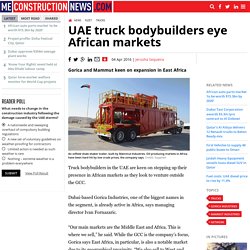 Oil-producing markets in Africa have been hard hit by low crude prices, the company says. Pricol eyes Africa to ride two-wheeler wave. New plant in Nigeria likely by 2020 as part of global strategy Mention Africa to Vikram Mohan and his eyes light up. 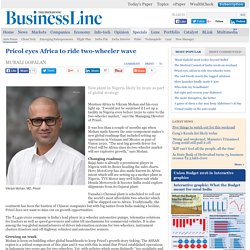 “I would not be surprised if I set up a facility in Nigeria even before 2020 to cater to the two-wheeler market,” says the Managing Director of Pricol. It was less than a couple of months ago when Mohan made known the auto component maker’s new global roadmap that included setting up operations in Vietnam and Mexico as part of Vision 2020. Mahindra to ship its heavy, commercial trucks to Africa over next 18 months. Utility vehicles major Mahindra is planning to ship its heavy and commercial vehicles to Africa over the next 18 months, a top company executive said on Wednesday. 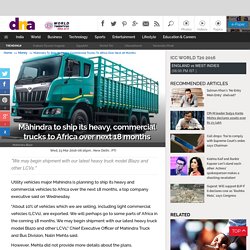 "About 10% of vehicles which we are selling, including light commercial vehicles (LCVs), are exported. We will perhaps go to some parts of Africa in the coming 18 months. We may begin shipment with our latest heavy truck model Blazo and other LCVs," Chief Executive Officer of Mahindra Truck and Bus Division, Nalin Mehta said. However, Mehta did not provide more details about the plans. Namibia Confirms North Korean-Built Arms and Ammunition Factory.

GABORONE, Botswana — The Namibian government has confirmed that North Korea built an arms and ammunition factory in the African country and is in the process of executing other contracts for the construction of the country's first military academy, military barracks and a new headquarters for the Ministry of Defense (MoD). The confirmation came a week after the government refuted the recent United Nations Panel of Experts (PoE), which found that Pyongyang has continuously violated UN Security Council sanctions imposed to protest its nuclear weapons program by providing military weapons, training and embarking on military-related construction projects in African countries, including Uganda and Namibia. The arms and ammunition factory was completed in 2005, although the company continued doing business in Namibia until early last year. Email: onkala@defensenews.com. Australian firm to set up cocoa processing plant in Cameroon. Business News of Wednesday, 16 March 2016 Source: APA Cocoa beans The Australian company, Atlantic Group, plans to build a cocoa bean processing unit in the southern Cameroonian town of Kribi, reliable sources disclosed on Monday.

The information was revealed in a call for expression of interest published on March 14, 2016, which invites companies to bid for the implementation of this project initiated by Atlantic Cocoa Corporation (ACC), a local subsidiary of Atlantic Group. Cameroun: le groupe indo-chinois CAIS obtient 15 ha de terrain pour son projet automobile. Africa: North Korea Builds Munitions Factory in Namibia. By Tileni Mongudhi Namibia's dealings with the Democratic People's Republic of Korea (North Korea) have been found to be in contravention of United Nations sanctions imposed on that country. The contravention includes the building of an armament factory. L'Inde entend développer l'industrie automobile en Tunisie. Isuzu aims for No1 status in Africa. THE success of Japanese truck manufacturer Isuzu in SA was a critical step in its goal to become the top brand in Africa, Isuzu Truck SA chief operating officer Craig Uren said on Wednesday.

He said last year was the best in the company’s nine-year history in SA: 4,500 sales gave it a 14.9% market share and further entrenched it as a major player. Isuzu is a partner domestically with General Motors SA. Longer term, said Mr Uren, Isuzu Trucks’ aim was to be "the number one player in Africa". As well as SA, the brand had assembly facilities in Kenya and Egypt. "Africa is a huge market opportunity," Mr Uren said. "Around the world, Isuzu does well, but Africa needs a lot more work to entrench the product," he said. It sold more than 20,000 new trucks into Africa last year.

To achieve this, the firm say they are setting up assembly plants in the country in order to achieve full-scale vehicle production. This is coming on the heels of Isuzu Motors Limited and Koncept Autocentre Limited’s announcement of plans to start truck assembly in the country in the second quarter of 2016. It is also coming at a time when CFAO Yamaha Motors Nigeria Limited has begun local motorcycles assembly.

Israelis to participate in South Sudan mega dairy project - Business & Innovation. Tel Aviv-based firm, AlefBet Planners Ltd., will be conducting the planning and design work for a $600 million dairy farming enterprise being developed by Indian entrepreneurs in South Sudan. The executives of AlefBet say the design work will require a wide range of complex infrastructural solutions. The project is expected to include five dairy farms, each of which will contain some 2,000 cows and adjacent milking parlors, making the facility one of the largest of its kind on the African continent, according to AlefBet.

Some of the required infrastructural plans will include establishing a clean water supply, providing a reliable and continuous power source and supplying proper cooling systems for the barns in a hot weather climate, explained Daphna Regev, director of business development and management. Panasonic opens manufacturing base in Lagos, partners SIMS for distribution. Plans have been concluded by Panasonic, a renowned electronics and home appliances marketing/distribution company to establish a local Panasonic manufacturing base with local sales offices for room Air-conditioning and TV division in Lagos. Looking at a wider customer base and a stronger hold in the Nigerian market, Panasonic is partnering SIMS Nigeria to help distribute products in the country.

The partnership is expected to position Panasonic once again as a dominant player in the country’s electronic products market category that has become very competitive. With main focus on Japanese Quality Systems Establishment, both brands have come up with an initiative that will boast the Panasonic mission to increase the focus on Africa market with localisation and customer satisfaction as the key agenda. Nigeria: Huawei to Partner Nigerian Manufacturers On Reliable Power Supply.

Anchor’s Fortified Milk Drink has been specifically formulated by NZ Milk Products to provide Ethiopian children with affordable high quality dairy nutrition so they can live a healthier and more active lifestyle for a better future. NZ Milk Products General Manager of Ethiopia Zeco Kassim said that every day Anchor provides millions of children around the world with high quality dairy nutrition, and NZ Milk Products is proud to bring Anchor to Ethiopia for the first time. “Malnutrition and micronutrients deficiency is a global problem and children unfortunately are not getting the right level of nutrition in their daily diet. “The thing my kids love about Anchor is the taste, which has been made especially to suit the palate of Ethiopian consumers. Le géant de la fibre optique Furukawa Electric va ouvrir une usine à Tanger.