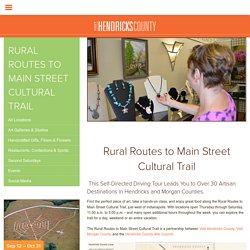 Find the perfect piece of art, take a hands-on class, and enjoy great food along the Rural Routes to Main Street Cultural Trail, just west of Indianapolis. With locations open Thursday through Saturday, 11:00 a.m. to 5:00 p.m. - and many open additional hours throughout the week, you can explore the trail for a day, weekend or an entire vacation. The Rural Routes to Main Street Cultural Trail is a partnership between Visit Hendricks County, Visit Morgan County and the Hendricks County Arts Council. Like it or not, ‘Apply Special Sauce’ app can peg your personality based on Facebook activity.

A vaguely disconcerting app from researchers at the University of Cambridge can guess how old you are, how smart you are and who you like to sleep with. 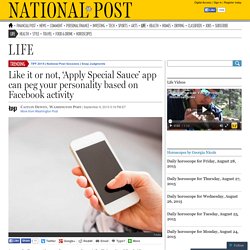 It’s not magic, and it’s not psychic. Instead, the recently redesigned tool, called “Apply Special Sauce,” is based entirely on the pages you’ve “liked” on Facebook. The app essentially works by comparing your “likes” against those of millions of other people. After you grant it access to your Facebook account, it sucks up the records of every page you’ve ever liked and runs that “digital footprint” against a vast internal model that Cambridge has built from tens of thousands of personality tests and six million social media profiles. Based on how closely your likes do or do not adhere to that model, Apply Special Sauce can guess a lot of things about you — including your age, politics, sexual preference and level of intelligence. Naturaleza y arte en Jupiter Artland - The Food Therapy. Sienta genial pasar un día en parajes naturales, rodeados de vegetación, respirando aire fresco… pero si además te dan un mapa chulísimo y te dicen que investigues porque hay obras de arte escondidas por todo el recinto ¡es mejor aún! 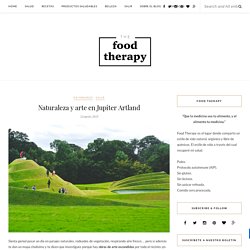 If you only count on Yelp and TripAdvisor to cover your food cravings while you travel, you might miss that great mom-and-pop local restaurants or pancake place that the locals frequent, as it will never in a million years make it to the popular guidebooks. 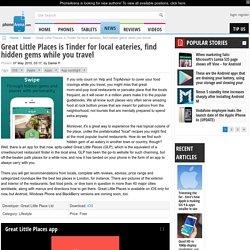 We all know such places very often serve amazing food at rock bottom prices that are meant for patrons from the neighborhood, not tourists that are mentally prepared to spend extra anyway. 5 Apps That Help You Find Your City's Hidden Gems. Finding hidden gems for your travel plans. New travel site TripGems helps travelers find things to do (tips and deals) on their next destination and let them share hidden gems with their friends and the world. 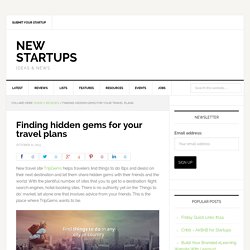 With the plentiful number of sites that you to get to a destination: flight search engines, hotel booking sites, There is no authority yet on the ‘Things to do’ market, let alone one that involves advice from your friends. This is the place where TripGems wants to be. “We want to unlock the ‘travel wisdom’ every traveler has in their head or in documents full of travel tips sitting on someone’s hard drive, bringing these hidden gems online is a firs step” says co-founder Maarten Munster. “The second step is letting local businesses that are ‘gemmed’ promote themselves and give them full autonomy over their deals, instead of being squeezed (what happens at different deal websites).”

For local businesses, TripGems also provides an opportunity to market their deals to a specific group and keep full autonomy on the deal. Finding hidden gems while travelling with new apps. TORONTO - News apps are helping users share information about sights and hidden gems in cities and countries around the globe so other people can benefit from their knowledge. 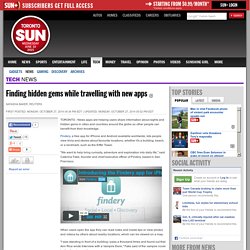 Findery, a free app for iPhone and Android available worldwide, lets people view trivia and stories about favourite locations, whether it's a building, beach, or a landmark, such as the Eiffel Tower. "We want to help bring curiosity, adventure and exploration into daily life," said Caterina Fake, founder and chief executive officer of Findery, based in San Francisco. Download an Inntravel brochure. The Graham & Co. SEATTLE TRAVEL GUIDE. Why We Love Seattle: The coffee culture, the black hoodies and rocker attitudes, and a ton of great neighborhoods each with their own vibe. 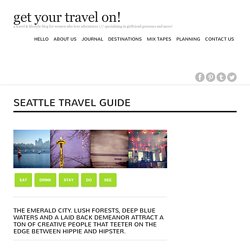 And yes, we love the rain. 5 Inspired Travel Guides for Planning Out-of-the-Box Vacations. If you are looking to have an outside-the-box travel experience and avoid the same tourist traps that most never make it beyond, picking up a unique travel guide is a great place to start. 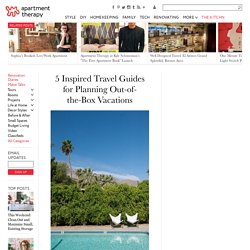 We’ve found five standout series, both for their great design and the wealth of information packed into their pages, to get you started on your own unique adventure. Previous image. Blog - deliciouslyorkshire. East Yorkshire Brewery highly commended at food and farming industry awards A Yorkshire Coast brewery has been highly commended at a national industry awards event. 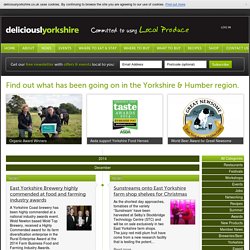 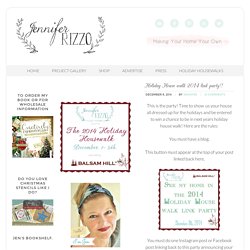