Expectation is the brand killer. There's a difference between speed and acceleration. 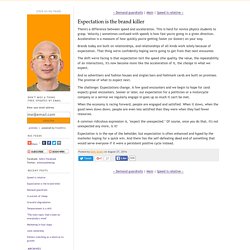 This is hard for novice physics students to grasp. Velocity ( sometimes confused with speed) is how fast you're going in a given direction. How HiSmile used social media to gain 100,000 customers - StartupSmart. Gold Coast entrepreneurs Nik Mirkovic and Alex Tomic were barely teenagers when they started watching what the world’s leading brands were doing to dominate their markets. 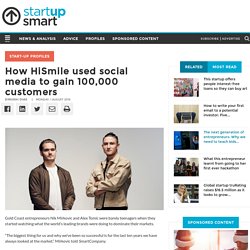 “The biggest thing for us and why we’ve been so successful is for the last ten years we have always looked at the market,” Mirkovic told SmartCompany. “I’ve always paid attention to how everything works.” So when Mirkovic, 21, and Tomic, 22, decided to launch their own business, they had a fairly solid understanding of consumer behaviour and market trends. The Future of Ecommerce: 2020 and Beyond. "We believe retail is at a tipping point," said Robert Peck of SunTrust Robinson Humphrey in a note to clients. 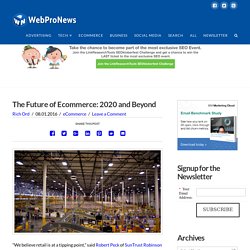 "E-Retailers are leveraging new capabilities in old business models to expand existing and new markets like apparel, grocery and personal care, where e-Commerce had only limited penetration till now. " According to BusinessInsider, Peck calls it "E-commerce 2.0. " Shopping online is growing fast, but still only represents a fraction of total shopping dollars, just under 8%, according to US Census data. As of the first quarter 2016, the total amount of retail spending online (ecommerce) was $92.8 billion, which was only 7.8% of all retail sales. Ecommerce is in its infancy, which means that there are huge opportunities ahead, not just for the types of Amazon, but for small merchants and startups as well.

Worldwide retail sales, including in-store and internet purchases, surpassed $22 trillion in 2015, up 5.6% from 2014, according to a study by eMarketer. Amazon Reshaping Ecommerce. 10 Colors That Increase Sales, and Why. Marketers and graphic designers have long known that color plays a major role in the success of any marketing campaign. 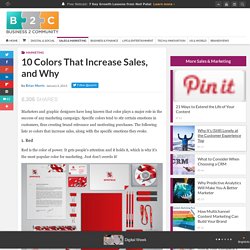 Specific colors tend to stir certain emotions in customers, thus creating brand relevance and motivating purchases. The following lists 10 colors that increase sales, along with the specific emotions they evoke. 1. Red Red is the color of power. Spritecs Corporate Identity 2. When you want to be viewed as trustworthy and cool, blue is the color for you. 3. Vying for the attention of a young female demographic? Recommended for YouWebcast: Neil Patel: 7 Key Growth Lessons in Advanced Customer Acquisition 4. The Top 4 Lessons in Behavioral Economics From Dilbert. Believe it or not, you can learn a lot from fiction. 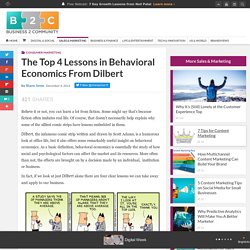 Some might say that’s because fiction often imitates real life. Of course, that doesn’t necessarily help explain why some of the silliest comic strips have lessons embedded in them. Dilbert, the infamous comic strip written and drawn by Scott Adams, is a humorous look at office life, but it also offers some remarkably useful insight on behavioral economics. As a basic definition, behavioral economics is essentially the study of how social and psychological factors can affect the market and its resources. The Science Behind Bad Decisions: How It Affects Online Retailers. Have you ever found yourself giving in to temptation more at the end of the evening, chalking it up to a loss in willpower? 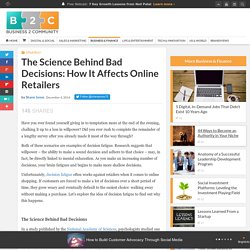 Did you ever rush to complete the remainder of a lengthy survey after you already made it most of the way through? Both of these scenarios are examples of decision fatigue. Research suggests that willpower – the ability to make a sound decision and adhere to that choice – may, in fact, be directly linked to mental exhaustion. As you make an increasing number of decisions, your brain fatigues and begins to make more shallow decisions.

Unfortunately, decision fatigue often works against retailers when it comes to online shopping. The Science Behind Bad Decisions In a study published by the National Academy of Sciences, psychologists studied one of the most prominent decision making scenarios– a judge deciding whether or not criminals should receive parole. During the study, researchers observed 1,112 judicial rulings over the course of a ten month period. The Six Stages of the Consumer Buying Process and How to Market to Them. Far too often, retailers think that consumer buying is randomized. 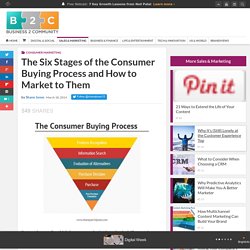 That certain products appeal to certain customers and that a purchase either happens or it doesn’t. They approach product and service marketing in the same way, based on trial and error. What if there were a distinctive set of steps that most consumers went through before deciding whether to make a purchase or not? What if there was a scientific method for determining what goes into the buying process that could make marketing to a target audience more than a shot in the dark? The good news? 1.Problem Recognition. The neuroscience of "cool" — Quartz. In the early 2000s, a major shift happened in the way people dress. 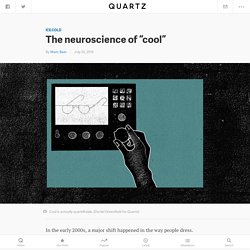 Flared and baggy jeans began to give way to a skinny, low-slung version, and by the end of the decade, it seemed everyone—including men—were squeezing into jeans so tight that doctors began issuing health warnings. How Capitalism Created 'Cool'