How to Create Social Media Buyer Personas. You’ve built an audience of potential customers for your brand. 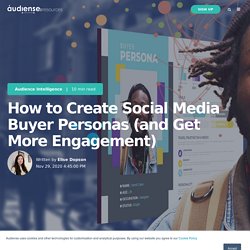 But if you’re struggling to get them to convert, you’re not the only one. Research shows that conversion rates of visitors referred by social media are one of the lowest of all channels. Social Media Targeting Guide. Facebook's Newest Consumer Trends: What Your Brand Needs to Know. As small and mid-size businesses continue to face challenges amidst COVID-19, platforms including Facebook, recognize their key role in helping people find new ways to support these companies, stay informed, and stay connected. 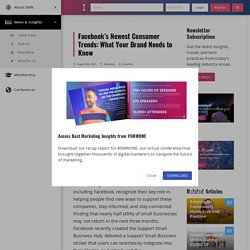 Finding that nearly half (45%) of small businesses may not return in the next three months, Facebook recently created the Support Small Business Hub, debuted a Support Small Business sticker that users can seamlessly integrate into their Stories, and introduced the #SupportSmallBusiness hashtag to encourage people to shout out their favorites. Fast forward to today, Facebook kicked off a new national television and digital campaign that aims to share small business stories of navigating the pandemic and how the platform’s various tools can help them find the balance between addressing the uncertainties of today while identifying the opportunities of tomorrow. Global shifts shaping the future. Imgur Thinks Its Nerdy Millennial Male Users Will Actually Love Its New Native Ad Unit. Imgur, a social platform for images and GIFs with 150 million monthly users, is announcing an ad product that doesn't have the most original name but seems to have intriguing potential. 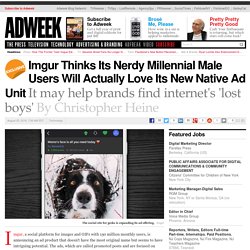 The ads, which are called promoted posts and are focused on mobile viewers, are inserted into Imgur users' content streams and can include video that plays in posts. Interestingly, there's no data targeting for the ads, and that's just the way Imgur wants it. Launch partners eBay, Square Enix and New Form's promoted posts will essentially be seen by all "Imgurians," who evidently represent the world's largest digital army of male geeks. "They love the idea of a unifying stream, a single content stream that everyone sees, providing a shared experience that gives them all something in common," explained Steve Patrizi, vp of revenue and marketing at Imgur. 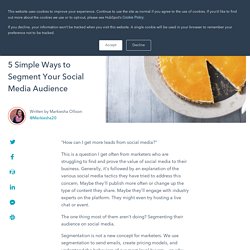 " This is a question I get often from marketers who are struggling to find and prove the value of social media to their business. Generally, it's followed by an explanation of the various social media tactics they have tried to address this concern. Maybe they'll publish more often or change up the type of content they share. Maybe they'll engage with industry experts on the platform. They might even try hosting a live chat or event. The one thing most of them aren't doing? Segmentation is not a new concept for marketers. How to Research and Locate Your Audience Using Social Media. THE SOCIAL MEDIA DEMOGRAPHICS REPORT: Differences in age, gender, and income at the top platforms. Persona Template for Content Planning. Do you ever wonder why your site or social media efforts aren’t yielding results? 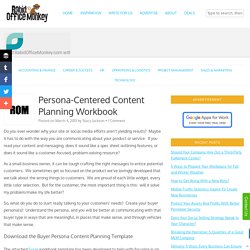 Maybe it has to do with the way you are communicating about your product or service. If you read your content and messaging, does it sound like a spec sheet outlining features, or does it sound like a customer-focused, problem-solving resource? As a small business owner, it can be tough crafting the right messages to entice potential customers. We sometimes get so focused on the product we’ve lovingly developed that we talk about the wrong things to customers. We are proud of each little widget, every little color selection. Infographic: Millennials are still the demographic du jour, but that's going to change soon. 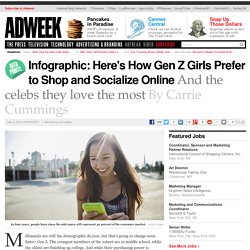 Enter: Gen Z. The youngest members of the cohort are in middle school, while the oldest are finishing up college. Conducting a Social Media Audit. Whether marketers like it or not, consumers are now generating over 25% of content that appears in web searches for specific brand names, and consumers often trust those social media messages more than advertising or news articles about the brand. 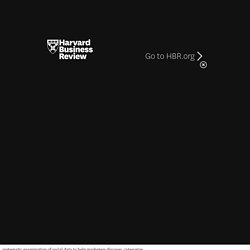 Research has shown that this “electronic word-of-mouth” is seen as reliable by consumers and significantly affects a firm’s perceived value. But with such a panoply of channels out there, how can social media marketers keep track of what people are saying? And what strategies can be implemented to engage those consumers to influence the conversation?

That’s where a careful social media audit can help. It’s a systematic examination of social data to help marketers discover, categorize, and evaluate all the social talk about a brand. Who categorizes data according to who is talking, whether that is the company, consumers, or a competitor. Twitter, Facebook, Instagram: le business de l'audience fictive. Justin Bieber va s’en remettre, mais le choc a été brutal. 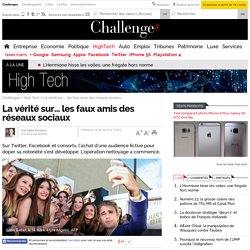 How Social Half-Life Reveals the Perfect Time to Post. InShare52 What strategy are you using when you sit down to schedule your twitter posts for the week? 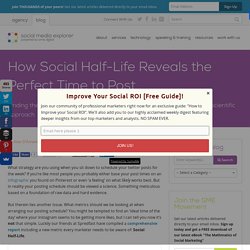 If you’re like most people you probably either base your post times on an infographic you found on Pinterest or even ‘a feeling’ on what likely works best. But in reality your posting schedule should be viewed a science. Something meticulous based on a foundation of raw data and hard evidence. Online Consumer Behavior: Theory and Research in Social Media, Advertising ... - Angeline Close - Google Books. 18 Incredibly Useful Market Research Tools for Social Media. You may have heard it said that understanding your audience on social media is one of the keys to success with social media marketing. 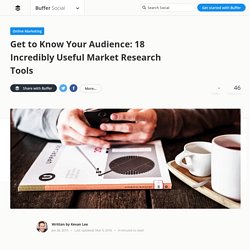 (We may have even said it ourselves a time or two!) Makes a lot of sense. The more you know about your audience, the better you’ll be able to deliver the kind of helpful content and updates they’re interested in. So what might be the simplest, most efficient ways of understanding an audience? 5 Ways to Segment Social Media Audiences. The most powerful way to segment social media audiences into really granular slices is by advertising. The catch? It costs money.

If you add a credit card to a social network, seemingly limitless filtering options become available. Sometimes the investment is worth it. Other times it’s not, especially if you don’t have an advertising strategy that fits into a larger strategy or a way to test your work. But, with some know-how, the free filtering options right under your nose can give you great results. How to Craft an Effective Social Brand Persona. Brands big and small need to have a presence on social media. Twitter, Facebook, LinkedIn, and the rising platform du jour have become too ingrained in daily life to ignore them as legitimate avenues for reaching–and being reached by–consumers. The problem lies in that social media can also present an entirely new set of challenges for organizations, as they feel out the best way to convey their brand’s message and devise best practices for social interaction. An effective presence is no accident – although anyone can create an account, success on social media is not necessarily intuitive.

Even habits and methods that brought success can fall by the wayside if those in charge of the accounts move on to other organizations or functions. The Ultimate Beginner's Guide To Finding Your Audience In Social Media. Identifying Audiences for Multichannel Marketing Campaigns. With today’s proliferation of available channels for e-commerce, customers have significantly enjoyed more control over the buying process. Along with this development, the importance of multichannel marketing has also increased to engage customers better.

And with so many avenues for communicating marketing messages, successful multichannel campaigns need to factor in audience segmentation to make campaign content more targeted, and thus more effective. Tailoring specific messages to segmented audiences increases engagement, which is why audience segmentation has become a vital part of this marketing campaign. How to Craft an Effective Social Brand Persona. 5 Ways to Segment Social Media Audiences. Adage. YORK, Pa. (AdAge.com) -- So it's not just that Mac guy in the "Get a Mac" ads who thinks he's better than everyone else. Apparently so do many of the people who use Apple's computers. Research from internet ad network Mindset Media confirms the ad's personification of Mac users as superior and self-satisfied. Its recent Mac user "mind-set profile" -- a psychographic ranking system that scores respondents on 20 different elements of personality -- found them to be more assured of their superiority, less modest and more open than the general population.

Mindset did not work with Apple, Microsoft or any other PC company for its survey of 7,500 Nielsen online consumers. Far fewer cohesive personality traits emerged among PC owners, likely because of the breadth of PC ownership. Increasing share The "Get a Mac" series of ads, also known as "Mac vs. Empowered. 18 Incredibly Useful Market Research Tools for Social Media. 3 Ways to Find Your Target Audience on Social Media. It’s interesting reading posts that proclaim Facebook to be dead as a marketing platform. I understand the sentiment - with organic reach in massive decline, many are putting their hands in the air, saying ‘what are we supposed to do?’

And it makes sense that many of these people would feel like turning away from Facebook, but when people ask is Facebook is dead – or, indeed, when people ask if any platform is any good from a marketing perspective – the real answer is that is depends on your audience. Is Facebook dead as a marketing platform? Not if that’s where your audience is. If the people you need to reach are on Twitter, Snapchat, Pinterest - that’s where you need to go, plain and simple. 1.