Kenya: Ban On 8-Year-Old Second Hand Cars to Start in July. By Victor Juma The age limit for second hand car imports is set to drop from eight to five years starting July, setting the stage for a steep increase in prices and taxes payable on the units. 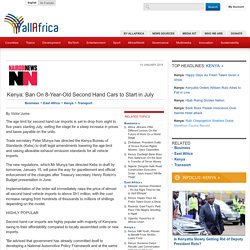 Trade secretary Peter Munya has directed the Kenya Bureau of Standards (Kebs) to draft legal amendments lowering the age limit and raising allowable exhaust emission standards for all vehicle imports. The new regulations, which Mr Munya has directed Kebs to draft by tomorrow, January 15, will pave the way for gazettement and official enforcement of the changes after Treasury secretary Henry Rotich's Budget presentation in June. Implementation of the order will immediately raise the price of almost all second hand vehicle imports to above Sh1 million, with the cost increase ranging from hundreds of thousands to millions of shillings depending on the model. Second hand car imports are highly popular with majority of Kenyans owing to their affordability compared to locally assembled units or new imports. Interview: Kenya's local manufacturing sector wins big with SGR. 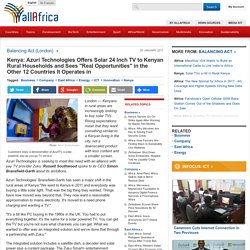 London — Kenyans in rural areas are increasingly looking to buy solar TVs. Rising expectations mean that they want something similar to a Kenyan living in the city, not a downscaled product with less content and a smaller screen. Azuri Technologies is seeking to meet this need with an alliance with pay TV provider Zuku. Africa: Powering Africa - Kenya Gets Its First Solar-Powered Digital TV Set. The 16-inch screen TV comes with a radio, torch, two lights, phone charger and 20-watt solar panel. 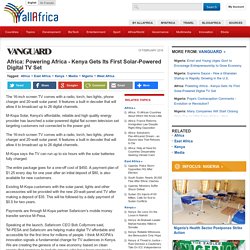 It features a built in decoder that will allow it to broadcast up to 26 digital channels. M-Kopa Solar, Kenya's affordable, reliable and high quality energy provider has launched a solar-powered digital flat screen television set targeting customers not connected to the power grid. M-Kopa says the TV can run up to six hours with the solar batteries fully charged. The entire package goes for a one-off cost of $450. A payment plan of $1.25 every day for one year after an initial deposit of $80, is also available for new customers. Existing M-Kopa customers with the solar panel, lights and other accessories will be provided with the new 20-watt panel and TV after making a deposit of $35. 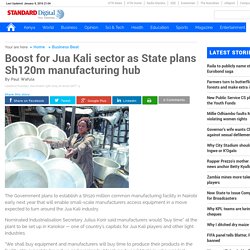 Nominated Industrialisation Secretary Julius Korir said manufacturers would “buy time” at the plant to be set up in Kariokor — one of country’s capitals for Jua Kali players and other light industries. “We shall buy equipment and manufacturers will buy time to produce their products in the facility. Kenya looks to grow leather export sector with 500ha industrial park. Kenya unveils blueprint to revive industrial and manufacturing sector. Cabinet Secretary Adan Mohammed By Beth Nyaga Kenya has unveiled its first-ever blueprint to revive its manufacturing and industrial exports sector. 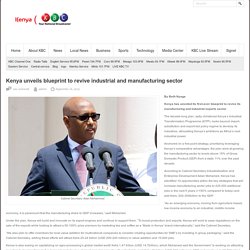 The decade-long plan, aptly christened Kenya’s Industrial Transformation Programme (KITP), looks beyond import-substitution and export-led policy regime to develop its industries, stimulating Kenya’s ambitions as Africa’s next industrial power. Anchored on a five-point strategy, prioritizing leveraging Kenya’s comparative advantages, the plan aims at growing the manufacturing sector to levels above 15% of Gross Domestic Product (GDP) from a static 11% over the past decade. According to Cabinet Secretary Industrialization and Enterprise Development Adan Mohamed, Kenya has identified 10 opportunities within the key strategies that will increase manufacturing sector jobs to 435,000 additional jobs in the next 5 years (+150% compared to today) and add Kshs. 200-300billion to the GDP. 1 Comment. 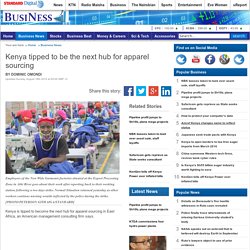 McKinsey & Company says the renewal of the African Growth and Opportunity Act (Agoa) -- US Trade Act which significantly enhances market access to America for qualifying Sub-Saharan African (SSA) countries - as well as ‘certain steps’ taken by the Government has contributed to the rising interest in the country as a potential sourcing destination for apparel. The authors reached this conclusion after visiting garment factories; interviewing players, including manufacturers and buyers; and analysing market data. Kenya to produce shoes for US market. Kenya could start producing shoes for the United States market under the renewed quota-free and tax-free access to the multi-billion dollar footwear market. 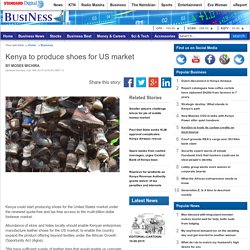 Abundance of skins and hides locally should enable Kenyan enterprises manufacture leather shoes for the US market, to enable the country expand the product offering beyond textiles under the African Growth Opportunity Act (Agoa). "We have sufficient supply of leather here that would enable us compete with China on footwear," Industrialisation Cabinet Secretary Adan Mohamed said. He had been directed by President Uhuru Kenyatta to come up with a list of new products that Kenyan businesses could start producing for the American market. But unlike China, the Agoa law allows for tax-free access for products sourced from developing countries in Africa.

To save forests, Kenyan tea factory brews new way to dry tea. Thika - The first thing that strikes you as you enter the Makomboki Tea Factory is the air. 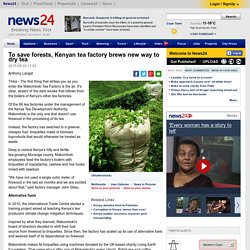 It's clear, absent of the dark smoke that billows from the boilers of Kenya's other tea factories. Of the 66 tea factories under the management of the Kenya Tea Development Authority, Makomboki is the only one that doesn't use firewood in the processing of its tea. Nairobi’s growing wealth attracts world’s food chains. Cold Stone Creamery outlet that was opened on Mama Ngina Street in Nairobi last weekend. 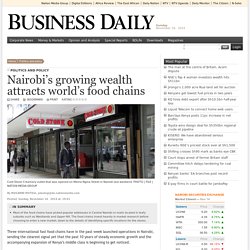 PHOTO | FILE | NATION MEDIA GROUP. Kenya’s Cheapest Car Hits The Market. VENTURES AFRICA – Kenyan start-up Mobius Motors has delivered on its promise to produce Kenya’s cheapest car, with Mobius II entering showrooms this month for the price of Sh950,000 ($10,620) “Mobius is re-imagining the car for Africa’s mass market and we are thrilled to gain the support of visionary investors such as PIC who see the social and commercial potential of our products across the continent,” Founder & CEO of Mobius Motors, Joel Jackson said in May, while announcing the company’s plans. 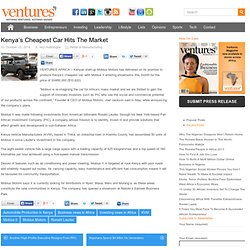 Mobius II was made following investments from American billionaire Ronald Lauder, through his New York-based Pan African Investment Company (PIC), a company whose mission is to identify, invest in and provide solutions that affect growth and development in sub-Saharan Africa. Kenya Vehicle Manufacturers (KVM), based in Thika, an industrial town in Kiambu County has assembled 50 units of Mobius II since Lauder’s investment in the company.

Car-drawn trailers gather steam in Kenyan market. The car-drawn trailers are targeted for different markets with a variety of sizes that include single axe trailers with 1 tonne capacity, as well as double axe trucks with 1.5 tonnes capacity/CFM NAIROBI, Kenya, Apr 23 – As infrastructure in the country continues to grow, entrepreneurs are now tapping into the transport sector where demand has risen. Among them include Geir Ostrem with his new product, light car-drawn trailers into the Kenyan market that is set to ‘steal’ light truck customers. “The idea of the company was actually launched by my father who imported a trailer from Norway many years ago and whenever he was moving around goods in Kenya, people would stop him and ask him, where he got the trailer… thus the idea was born,” Ostrem recounted.

Manufacturing in Africa and the Kits made in Kenya. Thika assembler starts building Africa’s cheapest car. Mobius is the brain child of computer engineer Joel Jackson. FILE The start-up auto firm that promised to build new cars worth $6,000 (Sh525,000) each for African roads has started assembling at the Thika-based Kenya Vehicle Manufacturers. The car, dubbed Mobius, is the brain child of computer engineer Joel Jackson and KVM has started the assembly of five units — supported by parts from Toyota — and plans to increase production to more than 500 units from mid-2014. The car, designed specifically for off-roading in Africa and stripped of luxuries including air conditioning, power steering and many internal fixtures, targets small business owners in need of affordable transportation. At $6,000, the car is cheaper than a four-year-old second-hand Toyota car which sells for around $10,000 (Sh872, 900) and new models that cost upwards of Sh2 million.

“We started assembly of Mobius two weeks ago. AVA last year said it was making 2,500 units compared to a peak of 10,000 units in 1985. Econo Heat launches energy efficient wall heaters in Kenya. Econo Heat Kenya has announced the introduction into this market of a wall-mounted panel heater. The wall panel heaters offer out-of-the-way wall mounting and are an economic way of providing efficient room heating at a low cost. Using natural convection technology, heat is mainly generated behind the heater in the space between the panel and the wall, which leads to an efficient up draught of heated air circulated into the room. This principle of convection means that about 90 percent of the heat comes from the back of the panel, while only 10 percent is radiated from the front of the panel.

This form of background heating is extremely economical, safe and efficient. The wall panel heater is designed as an alternative to conventional bar heaters and other forms of high output heaters that use large amounts of electricity. Plastics company to launch low-cost toilets. Sumaria Industries Limited (SIL) plans to start producing affordable plastic toilets targeting low-income earners without proper facilities. The company’s managing director Akshay Shah said the firm is banking on new technologies to produce plastic products at low costs. “We have laid much emphasis on energy conservation through new production techniques as we strive to land on the economies of scale zone,” Mr Shah told Business Daily. The company also plans to make affordable plastic school chairs and desks targeting low-end schools.

SA’s fashion chains Foschini and Edgars to open in Nairobi - Corporate News. Michael Turner, regional managing director of Actis. Photo/FILE Nation Media Group South Africa luxury fashion houses will next year open shop in Kenya, offering consumers more choices and raising competition in the segment now dominated by Deacons. Actis, a private equity fund, has said that Edgars and Foschini are some of the retailers that have booked space in its Sh12.6 billion real estate development on the Nairobi’s Thika Superhighway that is billed as Kenya’s biggest mall at 50,000 square metres. “The continued growth of the middle class provides opportunities for consumer goods and services providers and fashion giants like Edgars and Foschini have booked space with others,” said Michael Turner, regional managing director of Actis. More than half of new cars assembled in Kenya on lower taxes - Corporate News. Manufacturing Industry in Kenya.

Kenya will set up six tanneries to boost processing of leather following a 600 per cent growth in exports of hides and skins last year compared to 2010. Kenya Leather Development Council said that it would put up tanneries in six towns including Garissa, Isinya, Mogotio, Wote and Kajiado at a cost of Sh150 million. New York listed cosmetics firm sets shop in Nairobi