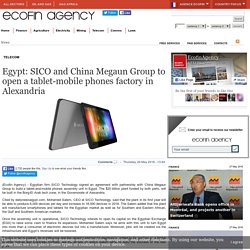 The $20 billion plant funded by both parts, will be built in the Borg-El Arab tech zone, in the Governorate of Alexandria. Cited by dailynewsegypt.com, Mohamed Salem, CEO at SICO Technology, said that the plant in its first year will be able to produce 6,000 devices per day and increase to 18,000 devices in 2018. The Salem added that the plant will manufacture smartphones and tablets for the Egyptian market as well as for Southern and Eastern African, the Gulf and Southern American markets.

Once the assembly unit is operational, SICO Technology intends to open its capital on the Egyptian Exchange (EGX) to raise some cash to finance its expansion. Mohamed Salem says he aims with this unit to turn Egypt into more than a consumer of electronic devices but into a manufacturer. Egypt: Alex Shipyard Celebrates Launching Gowind. Edita to support Hostess production with new plant in Egypt.

Egyptian textile market aims to quadruple exports by 2025. News Tags: best cottons in the world, cash subsidies, Egypt textile manufacturing, Egyptian long-fiber cotton, luxury cottontwo biggest markets for textiles and RMG, output of premium cotton, Readymade garment export council, United States and the European Union. two biggest markets for textiles and RMG Egypt has had a long history of textile manufacturing and they have one of the best cottons in the world but since the 2011 revolution, Egyptian cotton’s star has faded as cash subsidies from the government and output of premium cotton have shrunk, according to Mohamed Kassem, Chairman of the Ready Made Garment Export Council, a public-private partnership between the Ministry of Trade and Industry and some of Egypt’s most prominent clothing exporters. 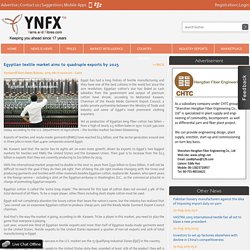 Yet as production of Egyptian long-fiber cotton has fallen – from a high of nearly 2.5 million bales in 1970 to just 340,000 today, according to the U.S. Department of Agriculture – the textiles market has been blossoming. Mr. Mr. Egypt forecast to be 8th largest growth market for smartphones. Partially Egyptian-made train gets first test-run. Karim Abdel Kodos , Saturday 8 Aug 2015 The New train (Photo:Ahram Gate Website) Egypt's national rail service will trial a new, partially Egyptian-made train on Saturday afternoon, sending the train on a test-run between Cairo and Alexandria. 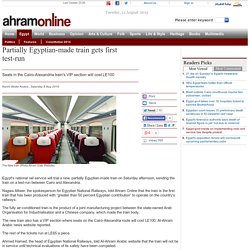 Nagwa Albeer, the spokesperson for Egyptian National Railways, told Ahram Online that the train is the first train that has been produced with “greater than 50 percent Egyptian contribution” to operate on the country's railways. The fully air-conditioned train is the product of a joint manufacturing project between the state-owned Arab Organisation for Industrialisation and a Chinese company, which made the train body. Govt Collects EGP344mn to Establish 3 Industrial Complexes in kafr El-SheikhEgypt. Egyptian Industry and Trade Ministry has collected around EGP344 million in order to implement 3 industrial complexes in different productive fields in Metoubes- kafr El-Sheikh Governorate of Egypt. 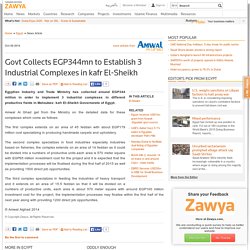 Amwal Al Ghad get from the Ministry on the detailed data for these complexes which come as follows: The first complex extends on an area of 45 feddan with about EGP179 million cost specializing in producing handmade carpets and upholstery. The second complex specializes in food industries especially industries based on fisheries, the complex extends on an area of 14 feddan as it could be divided into a numbers of productive units each area is 570 meter square with EGP65 million investment cost for the project and it is expected that the implementation processes will be finalised during the first half of 2015 as well as providing 1500 direct job opportunities. © Amwal Alghad 2014 © Copyright Zawya. 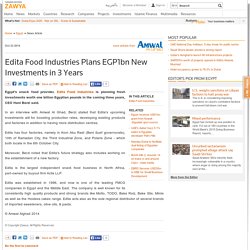 In an interview with Amwal Al Ghad, Berzi stated that Edita's upcoming investments will for boosting production rates, developing existing products and factories in addition to having more distribution centres. Edita has four factories, namely in Kom Abu Radi (Beni Suef governorate), 10th of Ramadan City, the Third Industrial Zone, and Polaris Zone - which both locate in the 6th October City. Report: Egypt's computer hardware sales increase 10.8% to LE7.5 bn in 2014. Egypt's computer hardware sales increased by 10.8 percent to LE7.467 billion (US$1.04 billion) in 2014 from LE6.737 billion in 2013, according to a new report released Wednesday by Business Monitor International. 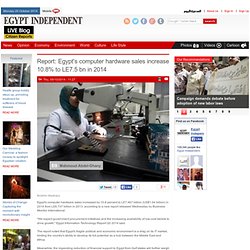 "We expect government procurement initiatives and the increasing availability of low-cost tablets to drive growth," Egypt Information Technology Report Q3 2014 said. The report noted that Egypt's fragile political and economic environment is a drag on its IT market, limiting the country's ability to develop its full potential as a hub between the Middle East and Africa.

Meanwhile, the impending reduction of financial support to Egypt from Gulf states will further weigh on growth over the short term, the report added. Egypt to invest $14.5 bln in petchems, refining over 5 years. * Part of drive to ease Egypt's energy crisis * State-owned companies to lead investment drive * Refinery expansion By Ehab Farouk and Abdel Rahman Adel CAIRO, Sept 28 (Reuters) - Egypt plans to invest $14.5 billion in developing its refining and petrochemicals sectors over the next five years, its oil minister said, as part of efforts to overcome an energy crisis that has led to near-daily power cuts and hit company profits. 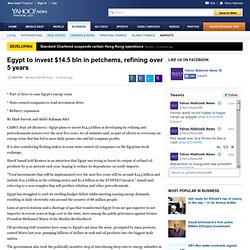 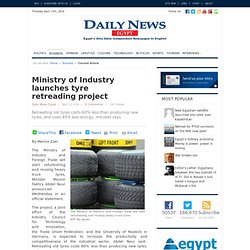 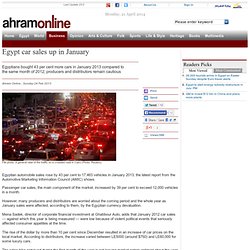 Passenger car sales, the main component of the market, increased by 39 per cent to exceed 12,000 vehicles in a month. However, many producers and distributors are worried about the coming period and the whole year as January sales were affected, according to them, by the Egyptian currency devaluation. Mena Sadek, director of corporate financial investment at Ghabbour Auto, adds that January 2012 car sales — against which this year is being measured — were low because of violent political events that seriously affected consumer appetites at the time. 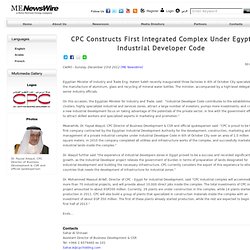 Hatem Saleh recently inaugurated three factories in 6th of October City specializing in the manufacture of aluminum, glass and recycling of mineral water bottles. The minister, accompanied by a high-level delegation of senior industry officials. On this occasion, the Egyptian Minister for Industry and Trade, said: "Industrial Developer Code contributes to the establishment of clusters, highly specialized industrial and services zones, attract a large number of investors, pumps more investments, and creates a new industrial development focus on taking advantage of the potentials of the private sector, in line with the government efforts to attract skilled workers and specialized experts in marketing and promotion.”

Meanwhile, Dr. Dr. Dr. Ends… First tablet computer to be fully manufactured in Egypt. The signing of the partnership agreement between Etisalat Egypt and Kharafi’s Arab Company for the Manufacture of Computers.