Consumer Trends: Towards a Healthy Lifestyle. As healthier lifestyles are becoming trendy, especially for Millennials, consumer trends against consumption of sugary foods, alcohol, and fatty foods are emerging. 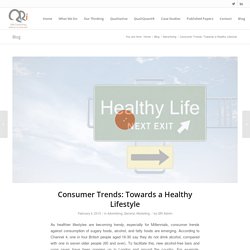 According to Channel 4, one in four British people aged 16-30 say they do not drink alcohol, compared with one in seven older people (60 and over). QRi consulting. #TheNewGeneration. 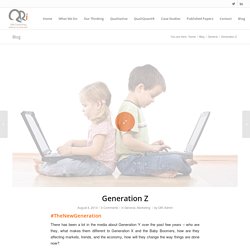 NonesOnTheRise full. Key takeaways from the Pew Research survey on Millennials. America is in the throes of a huge demographic shift, and a major factor in this sea change is the Millennial generation, which is forging its own distinct path to adulthood compared with older Americans. 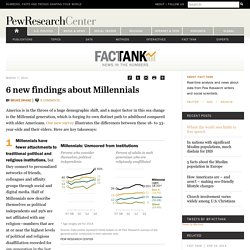 Our new survey illustrates the differences between these 18- to 33- year-olds and their elders. Here are key takeaways: 1Millennials have fewer attachments to traditional political and religious institutions, but they connect to personalized networks of friends, colleagues and affinity groups through social and digital media. Half of Millennials now describe themselves as political independents and 29% are not affiliated with any religion—numbers that are at or near the highest levels of political and religious disaffiliation recorded for any generation in the last quarter-century. Health & Wellness Marketing: The “Wellthy” Consumer. October 21st, 2014 Women’s Marketing recently collaborated with Rodale on original consumer research designed to explore and explain the modern “Health & Wellness” consumer mindset and delve into 2014 wellness trends. 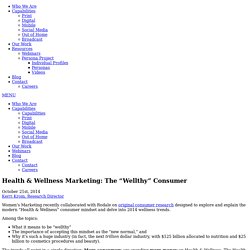 Among the topics: What it means to be “wellthy”The importance of accepting this mindset as the “new normal,” andWhy it’s such a huge industry (in fact, the next trillion dollar industry, with $125 billion allocated to nutrition and $25 billion to cosmetics procedures and beauty). The trends all point in a single direction: More consumers are spending more money on Health & Wellness. The Health & Wellness market has seeped into so many aspects of women’s lifestyles. Key takeaways from the Pew Research survey on Millennials. Does the practice of mindfulness have a place in the corporate world? Each month The Forum questions members of The Marketing Society on a hot topic. 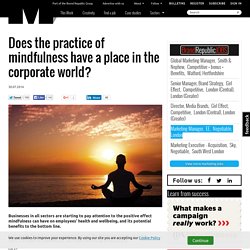 For more on membership, visit www.marketing-society.org.uk. Despite only recently discovering mindfulness, I am a convert, now actively practising both informally and formally. Refinery29, Dazed and i-D Battle for Millennials. NEW YORK, United States — Millennials — one of the largest generations in history, comprising people born between 1980 and 2000 — are about to enter their peak purchasing years. 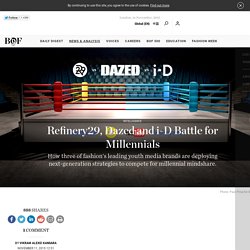 In the US alone, the group already accounts for an estimated $1.3 trillion in direct annual spending, a number that’s set to increase by 15 percent in the next five years. That’s not counting the 86 percent of millennials who live in emerging markets like China, India and Brazil. Nor does this take into account the impact this culturally influential group has on the spending decisions of others. It’s no surprise, then, that a wide range of brands are gearing up for fierce competition for millennial mindshare. Sorry, young people, but your prospects are worse than they've been for generations. Young people in Britain are facing their worst economic prospects for several generations, a major report has concluded. 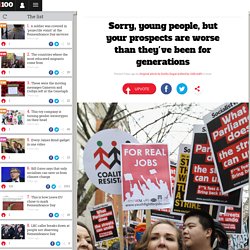 The Equality and Human Rights Commission has finished its largest-ever review of equality across the UK in a state-of-the-nation report. Here's what it found: Younger people have suffered the greatest drop in income and employmentThey also face greater barriers to achieving economic independence compared to five years agoPeople under 34 have less access to decent housing and better-paid jobs, and also face deepening povertyBetween 2008 and 2013, people aged 16-24 saw wages drop 60p an hour on average, to £6.70For the 25-34 bracket, wages fell £1.40 an hour to £10.60.

Mindful Living: Marketing Trend or Movement? The terms mindfulness and mindful living seem to be popping up everywhere, but what is mindfulness? 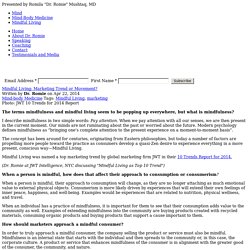 I describe mindfulness in two simple words: Pay attention. When we pay attention with all our senses, we are then present in the current moment. Our minds are not ruminating about the past or worried about the future. Modern psychology defines mindfulness as “bringing one’s complete attention to the present experience on a moment-to-moment basis”. The concept has been around for centuries, originating from Eastern philosophies, but today a number of factors are propelling more people toward the practice as consumers develop a quasi-Zen desire to experience everything in a more present, conscious way—Mindful Living. Mindful Living was named a top marketing trend by global marketing firm JWT in their 10 Trends Report for 2014. The Mindful Consumer - practical earth-friendly living. Move Over, Millennials, Here Comes Generation Z.

Why people under 35 are so unhappy. Say hi to Lucy.

Lucy is part of Generation Y, the generation born between the late 1970s and the mid 1990s. She’s also part of a yuppie culture that makes up a large portion of Gen Y. I have a term for yuppies in the Gen Y age group—I call them Gen Y Protagonists & Special Yuppies, or GYPSYs.