Luxury Daily. The quickly-growing, affluent Generation I, a demographic of Indians who grew up in the 1990s, will be responsible for 26 percent of total spending in the country before 2020, according to findings from a study by Boston Consulting Group. 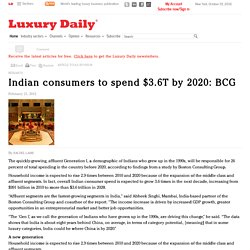 Household income is expected to rise 2.9 times between 2010 and 2020 because of the expansion of the middle class and affluent segments. In fact, overall Indian consumer spend is expected to grow 3.6 times in the next decade, increasing from $991 billion in 2010 to more than $3.6 trillion in 2020. “Affluent segments are the fastest-growing segments in India," said Abheek Singhi, Mumbai, India-based partner of the Boston Consulting Group and coauthor of the report. "The income increase is driven by increased GDP growth, greater opportunities in an entrepreneurial market and better job opportunities. “The ‘Gen I,’ as we call the generation of Indians who have grown up in the 1990s, are driving this change,” he said. Emerging Luxury Markets: Is India The Best Of BRICS? - Luxury Society - Markets.

As China continues to lose its luster, many brands are back to the drawing board to identify the new hotspot for luxury – and India is a strong contender. 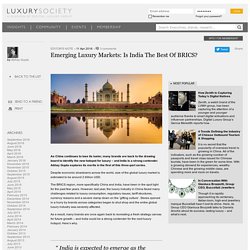 Abhay Gupta explores its merits in the first of this three-part series. Despite economic slowdowns across the world, size of the global luxury market is estimated to be around 2 trillion USD. The BRICS region, more specifically China and India, have been in the spot light for the past few years. However, last year, the luxury industry in China faced many challenges related to luxury consumption, regulatory issues, tariff structures, currency reasons and a severe clamp down on the ‘gifting culture’.

Stores opened in a hurry by brands across categories began to shut shop and the entire global luxury industry was severely affected. As a result, many brands are once again back to recreating a fresh strategy canvas for future growth – and India could be a strong contender for the next luxury hotspot. Growth Projections: Luxury Daily. Increased spending power, growing Internet penetration and access to ecommerce has caused handbag sales to grow at a fast rate in BRIC nations, according to a new report by Technavio. 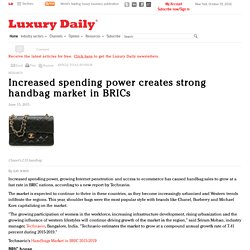 The market is expected to continue to thrive in these countries, as they become increasingly urbanized and Western trends infiltrate the regions. Luxury Daily. Developing countries including Brazil, Chile, Uruguay, Georgia, China and India are positioning themselves as valuable global retail markets for luxury brands looking to expand in these areas, according to research from A.T. 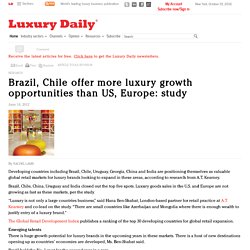 Kearney. Brazil, Chile, China, Uruguay and India closed out the top five spots. Luxury goods sales in the U.S. and Europe are not growing as fast as these markets, per the study. “Luxury is not only a large countries business,” said Hana Ben-Shabat, London-based partner for retail practice at A.T. Kearney and co-lead on the study. The Global Retail Development Index publishes a ranking of the top 30 developing countries for global retail expansion. Emerging talentsThere is huge growth potential for luxury brands in the upcoming years in these markets. Brazil held the No. 1 spot for the second year in a row.

“Brazil luxury is booming with both local players investing in luxury malls and more foreign luxury brands eyeing the market if they are not already there,” Ms. Luxury Goods in the BRIC Countries: Why They are Still Crucial to the Industry Landscape. Why buy this report? 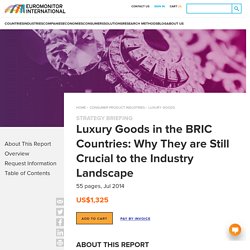 Gain competitive intelligence about market leaders. Track key industry trends, opportunities and threats. Inform your marketing, brand, strategy and market development, sales and supply functions. BRICs still offer strong potential Despite recent concerns about the slowdown experienced in the BRIC economies, these countries continue to command strong appeal, accounting for 12% of the world’s luxury good sales in 2013 and continue to grow. China leads pack despite government clampdown on extravagant consumption and gifting China is poised to become the world’s second largest market for luxury goods by 2018, as such, luxury goods companies continue to see great opportunity in capturing rising incomes in China.

Second- and third-tier cities grow in importance. Is the New Luxury a Better You? NEW YORK, United States — At 4pm on Saturday, April 30, a small group of runners convened at an event space in the warehouse-heavy neighbourhood of Red Hook, Brooklyn, for a guided meditation session. 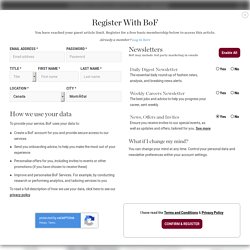 The gathering preceded the Red Hook Crit 5K run, a circuit race that happens in tandem with the more famous high-speed bicycling competition of the same name. The session was organised by Tom Daly and Max Vallot, who have spent the last two years developing the first line of products for their new label District Vision: made-in-Japan sunglasses specifically designed for running, which debuted in December 2015 and are sold at retailers including Dover Street Market and The Webster, as well as through the company’s own e-commerce platform. Daly and Vallot enlisted American photographer Chadwick Tyler to document the happening. The Red Hook Crit 5km run in Brooklyn, New York | Photo: Zach Hetrick for District Vision B.