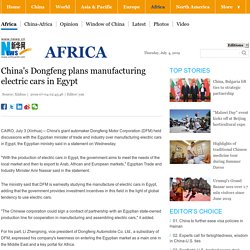 "With the production of electric cars in Egypt, the government aims to meet the needs of the local market and then to export to Arab, African and European markets," Egyptian Trade and Industry Minister Amr Nassar said in the statement. Russia’s TMH will develop rail manufacturing facility in South Africa. South Africa encourages international investors to help in developing the country’s manufacturing facilities. 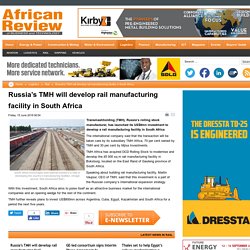 (Image source: Nick Amoscato/Flickr) The international company said that the transaction will be taken care by its subsidiary TMH Africa, 70 per cent owned by TMH and 30 per cent by Mjisa Investments. TMH Africa has acquired DCD Rolling Stock to modernise and develop the 45 000 sq m rail manufacturing facility in Boksburg, located on the East Rand of Gauteng province of South Africa.

Speaking about building rail manufacturing facility, Martin Vaujour, CEO of TMH, said that this investment is a part of the Russian company’s international expansion strategy. With this investment, South Africa aims to poise itself as an attractive business market for the international companies and an opening wedge for the rest of the continent.

TMH further reveals plans to invest US$800mn across Argentina, Cuba, Egypt, Kazakhstan and South Africa for a period the next five years. Chinese companies flourishing in Ethiopia's Eastern Industry Zone. Cameroon Automotive Holding has already invested FCfa 1.4 billion in its project to assemble Chinese vehicles in Kribi. Lu Fuqing, one of the directors of Cameroon Automotive Holding, Chinese-American company which aims to construct a Chinese vehicle assembly plant in Douala and Kribi, reveals that this company has already invested the tidy sum of FCfa 1.4 billion in this project. 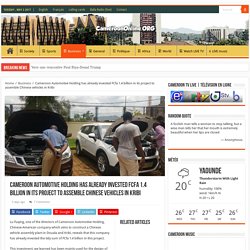 This investment, we learned has been mainly used for the design of 20 models of vehicles displayed in the Cameroonian capital since last 20 April, in order to allow the population and local authorities to try out “Star of Africa, the Cameroonian and African brand designed and protected for this purpose”, confides Lu Fuqing. China puts industrialisation of African economies on the international agenda. Continued low commodity prices have led countries such as Angola, Equatorial Guinea and Mozambique to place greater urgency on economic diversification, at a time when the industrialisation of Africa has the support of major international partners, especially China. 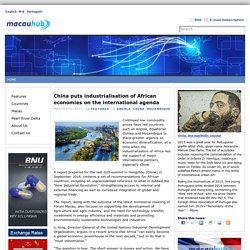 A report prepared for the last G20 summit in Hangzhou (China) in September 2016, contains a set of recommendations for African countries, including an unprecedented reference to what is dubbed the “New Industrial Revolution,” strengthening access to internal and external financing as well as increased integration of global and regional trade. The report, along with the outcome of the latest ministerial meeting of Forum Macau, also focuses on supporting the development of agriculture and agro-industry, and the need for technology transfer, investment in energy efficiency and materials and promoting environmentally sustainable technologies and industries.

“The question is how. The short answer is money and action. Related News: China's Transsion phones outsell Samsung in Africa, Technology/Digital News - AsiaOne Digital. Transsion Holdings Ltd, a Shenzhen-based smartphone maker few Chinese have heard of, is securing the jewel in the crown of the mobile world－the African continent, one of the most promising mobile arenas in the world. 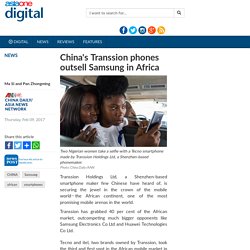 Transsion has grabbed 40 per cent of the African market, outcompeting much bigger opponents like Samsung Electronics Co Ltd and Huawei Technologies Co Ltd. Tecno and itel, two brands owned by Transsion, took the third and first spot in the African mobile market in the third quarter of 2016, respectively, data from technology consultancy Counterpoint Technology Market Research showed. In the first half of 2016, Transsion shipped 32.9 million handsets to overseas markets. In comparison, the number for Huawei, the world's third-largest smartphone maker, was 25.4 million units. Chinese to invest $6bn in vast Zimbabwean industrial zone. A Chinese company has announced plans to invest $6bn in a 200 square kilometre business park in Zimbabwe. 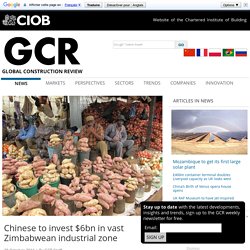 The project will take advantage of the introduction of “special economic zones”, passed by the country’s parliament last week and according to local paper The Herald, will “change Zimbabwe’s economy forever”. The company behind the plan is Qingdao Hengshun Zhongsheng, a listed company that until recently specialised in transmission and control equipment for electrical grids. The location of the park has not been announced, but Zimbabwean officials told The Herald that they expected it to be sited somewhere along the Bulawayo-Kwekwe railway corridor in the southwest of the country. The industrial park will include a non-ferrous metallurgy processing plant for the manufacture of mining and agricultural processing equipment, a power station and an upgraded rail system. As a gift to the host country, the Chinese concern will also build a primary school. 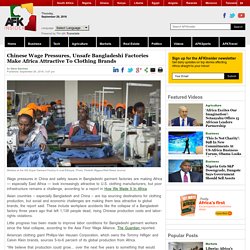 Photo: Petterik Wiggers/Wall Street Journal. Wage pressures in China and safety issues in Bangladeshi garment factories are making Africa — especially East Africa — look increasingly attractive to U.S. clothing manufacturers, but poor infrastructure remains a challenge, according to a report in How We Made It In Africa. Asian countries – especially Bangladesh and China – are top sourcing destinations for clothing production, but social and economic challenges are making them less attractive to global brands, the report said. These include workplace accidents like the collapse of a Bangladesh factory three years ago that left 1,138 people dead, rising Chinese production costs and labor-rights violations.

Little progress has been made to improve labor conditions for Bangladeshi garment workers since the fatal collapse, according to the Asia Floor Wage Alliance. China outsourcing manufacturing lines to Africa - CCTV News - CCTV.com English. By Miroslav Atanasov, Ph.D. 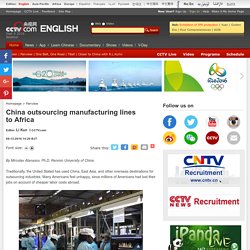 Renmin University of China Traditionally, the United Stated has used China, East Asia, and other overseas destinations for outsourcing industries. Many Americans feel unhappy, since millions of Americans had lost their jobs on account of cheaper labor costs abroad. Nevertheless, Chinese companies have begun to outsource at cheaper labor destinations, while increasing industrial production output in important economic sectors, such as textile, electronics, and car assembling, especially in East Africa. 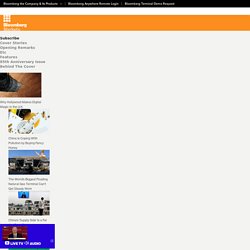 The Beijing Automotive International Corp. plans to start production at the facility in 2018, International Chief Executive Officer Dong Haiyang told reporters in the southern coast city of Port Elizabeth on Tuesday. The plant will be built in partnership with South Africa’s state-owned Industrial Development Corp. and have a capacity of 100,000 units a year by 2027, he said at the the industrial development zone where the factory will be located. 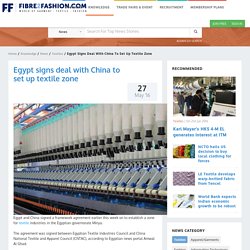 The first agreement provides for the building by Cmbi of a new cement plant in Bechar with a 1million tonnes per year capacity (3.200 tonnes/day). China Sets Sights On Largest Free Trade Zone in Africa. China has set its sights on constructing the largest free trade zone set to build the largest free trade zone in the Horn of Africa, Djiboutian Finance Minister Ilyas Moussa Dawaleh has said. The Horn of Africa is a peninsula in Northeast Africa. It juts hundreds of kilometers into the Arabian Sea and lies along the southern side of the Gulf of Aden.

The area is the easternmost projection of the African continent and a historically prime hub for shipping and trading. Chinese Carmakers Seek Ground In African Markets. East Africa is seen as a potential market An SUV produced by Chinese automobile firm BAIC Motors. Photo by Taddeo Bwambale. Uganda: Chinese Firm Sets Up Factory to Manufacture Mosquito Nets. By Edward Ssekika A Chinese company, Sino Africa Medical Devices, has set up a plant in Uganda to manufacture long-lasting insecticide treated ed mosquito nets (LLNs). The factory is to manufacture three million mosquito nets annually in its initial phase. While commissioning the factory at its premises in Luzira industrial park last week, Amelia Kyambadde, the minister of Trade, Industrial and Cooperatives, said the factory will offer jobs to the youth and also help government raise revenues in form of taxes and other revenues. So far, the factory employs 115 Ugandans at its Luzira premises.

Nigeria's Dangote signs Chinese bank loan for two cement plants. Chinese factories to be blueprints of future African deals. Paul Jourdan, a mineral policy analyst, said that "Chinese factory-relocation is the way to go for Africa. " LUCIE MORANGI / FOR CHINA DAILY A paradigm shift is set to take place with the planned relocation of Chinese factories to Africa. Paul Jourdan, a mineral policy analyst from South Africa, said the transfer highlights the need for Africa to steer away from deals focusing on the extractive industries. By developing value-addition, future treaties should instead drive industrial development, which is behind China's economic success. Chinese investments to boost Africa's manufacturing capacity: expert.

La Chine va fabriquer des bus et des trains en Tunisie. Africa Becoming Chinese Enterprises' Foreign Investment and Cooperation Hotspot. By Gao Bo and Li Junyi "My company keeps two times - Beijing Time and Ethiopian Time", Li Weiming, Special Assistant to President of Huajian Group, disclosed to journalists at the Seminar on Investment Promotion to Ethiopia, Kenya, Mozambique and Zambia held in Tangshan recently. He added that his company had established a subsidiary factory in Ethiopia over the past five years or so. Being a shoe making establishment, the Huajian Group's Ethiopian factory boasts more than 4,000 local employees and 6 production lines, exporting 2.4 million pairs of women's foot wear annually, with an average profit rate of 10% and (RMB) 15 million of proceeds in year 2015 alone.

Li commented that the one big reason for his company to go to Africa was the soaring domestic labor cost. When they were constructing a subsidiary factory in Ganzhou, Jiangxi Province, in 2002, the cost of labor only accounted for 11% of the total, but now it has shot up to 33%. China glass factory sets eyes to regional market. A MASSIVE float glass manufacturing company is under full-swing construction in Mkuranga, Coast Region with the aim to meet the increasing demand for glass products in Tanzania and other East African nations. The Glass Industry Group of Africa (GIGA) is expected to churn out 600 tons of float glass a day, for which it will rank as the largest glass producer in the East Africa Community. Chinese Firm to Build Largest Steel Pipe Plant in Nigeria's Lagos Lekki Free Trade Zone : Business. Manny Salvacion | Dec 19, 2015 07:35 AM EST. Africa: China-Africa Industrial Capacity Cooperation Fund Starts Operation. Maliweb.net - Ces usines chinoises qui se déplacent vers l'Afrique - maliweb (original)