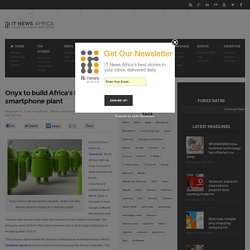 According to a report by TimesLive, South African start-up, Onyx Connect is set to become the first to manufacture smartphones in Africa. Onyx is licensed to load Google software like Android and Chrome onto devices sold under the company’s own brand or products. The company raised $10.8 million from investors and is set to begin production in the first quarter of 2017. 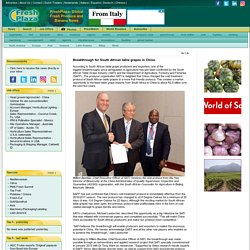 The producer organisation SATI is delighted that China changed the cold treatment protocol of South African table grapes to a more fruit friendly protocol. This creates a market opportunity to increase table grape exports from South Africa to China to about R2,5 billion over the next five years. Willem Bestbier, Chief Executive Officer of SATI, receives the new protocol from Wu Hao, Director of Biosecurity at the China Administration of Quality Supervision, Inspection and Quarantine (AQSIQ) organisation, with the South African Counsellor for Agriculture in Beijing, Mashudu Silimela.

For more information:Willem BestbierEmail: willem@satgi.co.za. To Compete Globally, South Africa Makes 3D Printing A Government Strategy. South Africa’s public and private sectors are stepping up investment in 3D printing technology as the country seeks to identify future markets and products that will allow it to compete globally. 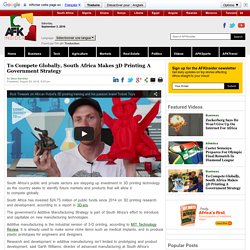 South Africa has invested $24.75 million of public funds since 2014 on 3D printing research and development, according to a report in 3D-ers. The government’s Additive Manufacturing Strategy is part of South Africa’s effort to introduce and capitalize on new manufacturing technologies. Additive manufacturing is the industrial version of 3-D printing, according to MIT Technology Review. It is already used to make some niche items such as medical implants, and to produce plastic prototypes for engineers and designers. Research and development in additive manufacturing isn’t limited to prototyping and product development, said Garth Williams, director of advanced manufacturing at South Africa’s Department of Science and Technology. 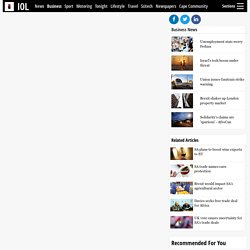 So said Michael Mokhoro, stakeholder relationship manager for South Africa’s wine and brandy industries. File picture: Regis Duvignau. Credit: REUTERS Countries in Sacu include South Africa, Botswana, Lesotho, Mozambique and Namibia. New Factory Will Produce First-Ever Train Made In South Africa. Sa-railnews.blogspot.com Workers have broken ground on a factory under construction near Johannesburg that will provide jobs for 1,500 people and produce the first locomotive train ever manufactured in South Africa. 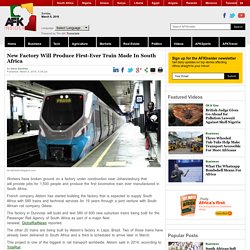 French company Alstom has started building the factory that is expected to supply South Africa with 580 trains and technical services for 19 years through a joint venture with South African rail company Gibela. The factory in Dunnotar will build and test 580 of 600 new suburban trains being built for the Passenger Rail Agency of South Africa as part of a major fleet renewal, GlobalRailNews reported. The other 20 trains are being built by Alstom’s factory in Lapa, Brazil. South Africa apparel industry employment rising. South Africa: Durban to House R150 Million Chinese Fibre-Optics Plant.

By Gareth Van Zyl Chinese fibre maker YOFC is injecting R150m into a local manufacturing facility to produce one million kilometres of cable each year. 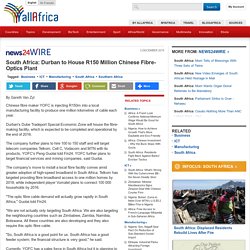 Durban's Dube Tradeport Special Economic Zone will house the fibre-making facility, which is expected to be completed and operational by the end of 2016. The company further plans to hire 100 to 150 staff and will target telecom companies Telkom, Cell C, Vodacom and MTN with its products, YOFC's Peng Guotai told Fin24. YOFC further plans to target financial services and mining companies, said Guotai. Construction a new wax plant in South Africa begins. Construction work on the second phase of a new wax plant in South Africa has began. 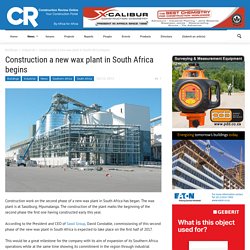 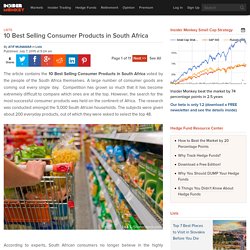 A large number of consumer goods are coming out every single day. Competition has grown so much that it has become extremely difficult to compare which ones are at the top. However, the search for the most successful consumer products was held on the continent of Africa. The research was conducted amongst the 5,000 South African households. The subjects were given about 200 everyday products, out of which they were asked to select the top 48. Lisa S. According to experts, South African consumers no longer believe in the highly attractive advertising. Experts are also of the opinion that Product of the year is assisting the brands a great deal in finding out what customers are looking for precisely. Why South Africa is thrilling the wine world. Thelema Mountain Vineyards Winery, Stellenbosch, South Africa (ALAMY) “There’s huge excitement at the top end, I guess more than £15 a bottle,” says Anthony. 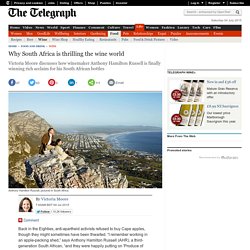 “And esoteric small production as a result of South Africa’s move away from large volumes.” Tim Hamilton Russell, Anthony’s father, was a pioneer of South Africa’s modern wine industry. He bought land in Hemel-en-Aarde close to the Atlantic coastline, in 1975, planted vines in 1976 and made his first wine in 1981, supervising the operation from Johannesburg, where he owned and ran the advertising agency J Walter Thompson South Africa. •3 of the best Piedmont reds During Hamilton Russell’s early years, Anthony was largely elsewhere. Africa offers new waters for boat-building sector.

SA’s boat-building industry expects a boost in exports of its products as opportunities increase in the rest of Africa due to growth in the oil and gas industry. 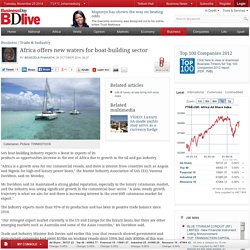 "Africa is a growth area for our commercial vessels, and there is interest from countries such as Angola and Nigeria for high-end luxury power boats," the Marine Industry Association of SA’s CEO, Vanessa Davidson, said on Monday. Ms Davidson said SA maintained a strong global reputation, especially in the luxury catamaran market, and the industry was seeing significant growth in the commercial boat sector. "A slow, steady growth trajectory is what we aim for and there is increasing interest in the over-60ft catamaran market for export. " The industry exports more than 95% of its production and has been in positive trade balance since 2010.

"Our strongest export market currently is the US and Europe for the luxury boats, but there are other emerging markets such as Australia and some of the Asian countries," Ms Davidson said. Hyundai opens first assembly plant in SA - Industrials. JOHANNESBURG – After over a decade of importing vehicles to the local market Hyundai Automotive South Africa has set up its first commercial vehicle assembly plant in Benoni, east of Johannesburg.

Following an investment of R110 million by Associated Motor Holdings (AMH), its distributor and a division of Imperial, Hyundai plans to assemble approximately 5 000 vehicles a year at the plant, its chief executive officer, Alan Ross says. The operation, which started production in early-July, employs 30 staff. Burger King arrives in South Africa. Massmart’s Game, Builders Warehouses Expand Into Kenya, Angola. VENTURES AFRICA – South Africa’s Massmart continued to expand its flagship Game and Builders Warehouses into Africa, CEO Grant Pattison revealed on Thursday morning. “Both formats (warehouses) have approved several new sites in existing African markets. Game sites have also been approved in Angola and Kenya, both of which are new markets for Massmart,” Pattison said without naming other countries. Additionally, Pattison said the Supplier Development Fund, which increased from R100 million ($11.3 million) to R240 million ($27 million) following the ruling set down by the Competition Appeal Court, was already operational.

After their merger, US Walmart and Massmart, offered an investment answer that would have seen them splurge R100 million ($11.3 million) over three years on the fund. The labour movement protested to the union, asking the fused entity to bind itself to a fund worth R500 million ($57 million). Headline earnings surged 6 percent while operating profits gained 6.1 percent. Media Source Africa: South Africa: Samsung TV partners with OnMag online for TV App to launch onTV. Samsung TV has partnered with South African online publishing company OnMag Online Publications to launch onTV, the first television application of its kind in Africa that brings together magazines, news, weather, games, and movie information and trailers – exclusively on the Samsung Smart TV range.

“Samsung has always been committed to ensuring our customers have access to the latest technology that lets them embrace the digital lifestyle from the comfort of their home. With the onTV app, we are taking this to the next level by working with OnMag to offer a proudly South African solution that brings together exciting news, sports, weather, gaming and movie previews,” says Justin Shaw, Business Leader for Visual Display at Samsung South Africa.

Five of South Africa’s most interesting companies. South Africa has birthed numerous world-class companies that are global leaders in their respective industries. Businesses such as SABMiller, MTN and Old Mutual all have their roots in the southern tip of Africa. Then there are also entrepreneurs such as Mark Shuttleworth who shot to fame in 1999 when he sold his internet security company Thawte to US-based VeriSign for more than US$500 million.