Zambia: 100 Solar Milling Plants to Be Operational Soon. By Sylvester Mwale The Zambia Cooperative Federation (ZCF) has announced that the 100 solar milling plants under the Presidential Initiative will be operational by February 15 this year. 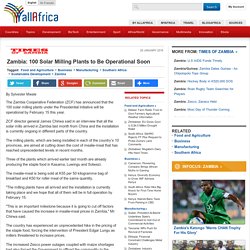 Zambia: New Cable Firm Coming. By Maimbolwa Mulikelela Neelkanth Cable Zambia Limited, a new cable manufacturing company, will be commissioned in January 2016 at a cost of around US$17 million. 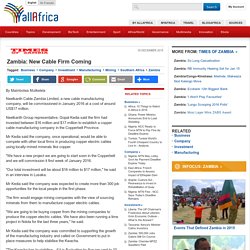 Neelkanth Group representative, Gopal Kedia said the firm had invested between $16 million and $17 million to establish a copper cable manufacturing company in the Copperbelt Province. Mr Kedia said the company, once operational, would be able to compete with other local firms in producing copper electric cables using locally-mined minerals like copper. "We have a new project we are going to start soon in the Copperbelt and we will commission it first week of January 2016.

Dangote Cement factory to be ready in June. Time Posted: February 18, 2014 5:02 am CEMENT production in Zambia is expected to reach above 2.5 million tonnes per annum when Dangote Limited commissions its cement factory in Ndola at a cost of US$400 million this year. 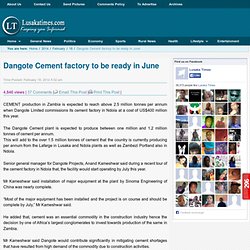 The Dangote Cement plant is expected to produce between one million and 1.2 million tonnes of cement per annum. This will add to the over 1.5 million tonnes of cement that the country is currently producing per annum from the Lafarge in Lusaka and Ndola plants as well as Zambezi Portland also in Ndola. Senior general manager for Dangote Projects, Anand Kameshwar said during a recent tour of the cement factory in Ndola that, the facility would start operating by July this year.

Mr Kameshwar said installation of major equipment at the plant by Sinoma Engineering of China was nearly complete. “Most of the major equipment has been installed and the project is on course and should be complete by July,” Mr Kameshwar said. Jaguar Land Rover to set up a construction plant in Zambia. Time Posted: October 7, 2013 8:21 am JAGUAR Land Rover is set to invest about US$5 million in the construction of its plant in Zambia, head of importer network for Sub-Sahara Africa Matthew Creese has said. 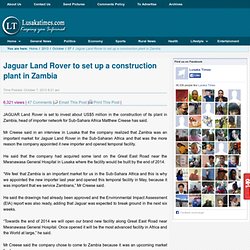 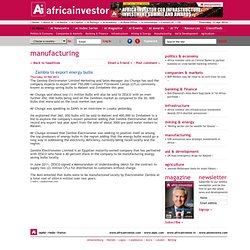 Mr Chunga said about one (1) million bulbs will also be sold to ZESCO with an even further 450, 000 bulbs being sold on the Zambian market as compared to the 30, 000 bulbs that were sold on the local market last year. Mr Chunga was speaking to ZANIS in an interview in Lusaka yesterday. He explained that 360, 000 bulbs will be sold to Malawi and 400,000 to Zimbabwe in a bid to explore the company’s export potential adding that Zambia Electrometer did not record any export last year apart from the sale of about 3000 pre paid water meters to Malawi. 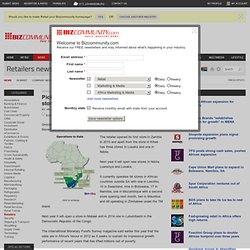 The retailer opened its first store in Zambia in 2010 and apart from the store in Kitwe has three stores in Lusaka and one in Ndola. Next year it will open new stores in Ndola‚ Luanshya and Lusaka. It currently operates 94 stores in African countries outside SA with one in Lesotho‚ 10 in Swaziland‚ nine in Botswana‚ 17 in Namibia‚ one in Mozambique with a second store opening next month‚ two in Mauritius and 48 operating in Zimbabwe under the TM brand. Next year it will open a store in Malawi and in 2014 one in Lubumbashi in the Democratic Republic of the Congo. The International Monetary Fund's Survey magazine said earlier this year that the odds are in Africa's favour in 2012 as it seeks to sustain its impressive growth performance of recent years that has lifted millions out of poverty. 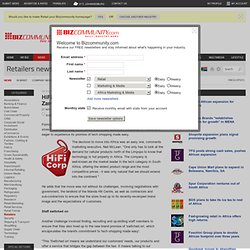 Since then it has welcomed thousands of customers eager to experience its promise of tech shopping made easy. The decision to move into Africa was an easy one, comments marketing executive, Neil McLean. "One only has to look at the demand for cellular products north of the Limpopo to know that technology is hot property in Africa. The company is well-known as the market leader in the tech category in South Africa, offering the widest product range and the most competitive prices - it was only natural that we should extend into the continent.

" He adds that the move was not without its challenges, involving negotiations with government, the landlord of the Manda Hill Centre, as well as contractors and sub-contractors to ensure that the store lived up to its recently-revamped brand image and the expectations of customers. Staff switched on.