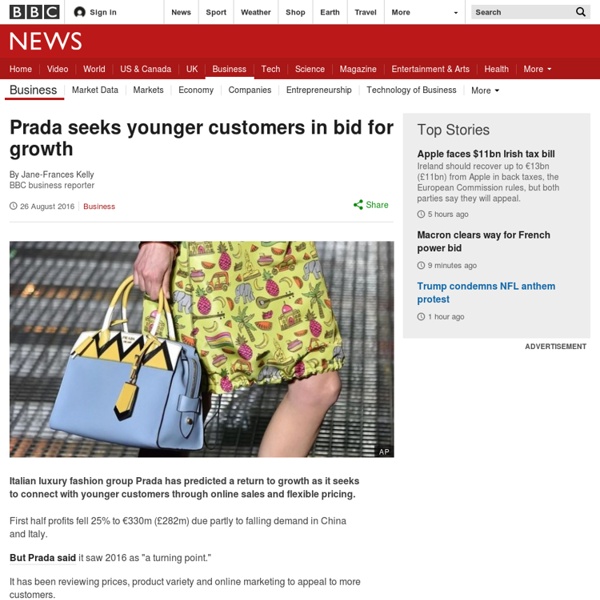 Image copyright AP Italian luxury fashion group Prada has predicted a return to growth as it seeks to connect with younger customers through online sales and flexible pricing. First half profits fell 25% to €330m (£282m) due partly to falling demand in China and Italy. But Prada said it saw 2016 as "a turning point." It has been reviewing prices, product variety and online marketing to appeal to more customers. Revenue fell 15% to €1.55bn compared to this time last year and in April Prada announced its lowest profits in five years. It was previously criticised for opening too many new stores and failing to invest enough online. Prada said it was on track with plans to double its e-commerce sales over the next two years by increasing the number of products it offered online, particularly shoes. It will also expand its social media activities so it can raise its profile among "the 'always connected' millennials," referring to the 20s -30s age group. Image copyright Getty Images Related:  3.3.4 Making marketing decisions: using the marketing mix

3.3.4 - Starbucks drops its name and the word coffee from logo Starbucks, the world's largest chain of coffee shops, has unveiled a new logo which it says indicates its intention to move beyond its core product. The US giant's new logo does away with the words "Starbucks" and "coffee", leaving just the firm's white on green image of a twin-tailed siren. Starbucks said that in the future "it's possible we'll have other products with our name on it and no coffee in it". However, some brand experts have criticised the move. "I think it's nuts," said James Gregory, chief executive of brand consulting firm Core Brand. "What's it going to be - the coffee formerly known as Starbucks?" Starbucks is already moving ahead with plans to extend its product range, and now also sells ice-cream. It is also considering selling beer and wine at some US outlets. Starbucks chief executive Howard Schultz said: "What is really important here is an evolutionary refinement of the logo, which is a mirror image of the strategy.

Dolce & Gabbana’s Local Retail Revolution | News &amp; Analysis | BoF MILAN, Italy — Dolce & Gabbana is to embark on a global overhaul of its directly operated retail network, starting with the opening of a new experience space in Milan on September 24th. The Italian fashion house’s announcement marks a growing trend for brands to create a localised destination for customers, shifting away from the standardisation strategy long favoured by large global retailers, which traditionally rolls out a uniform store format, merchandise mix and marketing strategy. Dolce & Gabbana said the move marks the end of the “concept store philosophy,” in favour of a new formula where “experience and storytelling,” is the focus. It currently has 222 monobrand stores across 41 countries, some of which will change to the new format and some that will remain as they are. “The fashion system is going through an evolution,” Domenico Dolce tells BoF. If you have the same store in London, exactly like Milan, with the same clothes, it’s like déjà vu for the customer. Related articles:

Anna Sui Spring 2016 Ready-to-Wear Collection The penultimate day of the New York show sprint and who among us isn’t in need of a visit to some far-flung, beachy locale? That’s just what Anna Sui served up tonight, albeit only a stone’s throw from the fracas of an assembled many awaiting another iconoclast (the lady Madge) over at Madison Square Garden. Prompted by a recent getaway of her own to Tahiti and Honolulu, Sui riffed on pop’s long-standing affair with island life, from the ’30s starlet Dorothy Lamour, to Elvis’s trinity of Hawaiian movies, to David Bailey’s shot of a bronzed, sun-soaked Marie Helvin. Even Jane Campion’s high-minded New Zealand period piece The Piano made the cut in the form of a little subtly placed Victoriana. Sui’s tendency toward an almost magpie-like archivist’s eye remains one of her more defining and compelling characteristics. Indeed, today’s Honolulu honeys embodied all the best parts of kitsch: its color, its humor, its play. And what of the prints?

3.3.4 Train fares rise by an average of 2.3% Image copyright PA Rail passengers are facing higher fares across the UK as average price increases of 2.3% are introduced on the first weekday of the new year. The increase covers regulated fares, including season tickets, and unregulated, such as off-peak tickets. Campaigners said the rise was a "kick in the teeth" for passengers after months of widespread strike disruption. The government said it was delivering the biggest rail modernisation programme for more than a century. The increase in fares came as a strike by conductors on Southern Rail entered its third day, as a long-running row about the role of guards on new trains continued. The RMT union began the 72-hour walkout on New Year's Eve, while another strike is set for 9 January. Why are prices rising? Image copyright Dan Kitwood By Richard Westcott, BBC transport correspondent Even if you allow for inflation, rail fares have gone up by around 25% since the mid-1990s. Some tickets have spiked by 40% in just a decade. Why? New trains

Fast fashion meets luxury labels Suzy Menkes reviews Alexander Wang's New York Fashion Week show | British Vogue The music pounded through the vast pier building on the Hudson River: smashing through the ear drums, reverberating off hefty machinery, the unstoppable noise mixed with eye-popping images on screen of delivery trucks in action. And that was before the Alexander Wang show had even started. But there was a story behind the tale on screen. In a new collaboration with Adidas that dominated the show and was given prominence in a dramatic revelation as the finale. The clothes will be offered for sale from mobile pop-up stores in trucks circling downtown Manhattan. So much smart marketing – or as front row guest Madonna's black cap read: “WANGFEST”. With rappers, rockers and significant others in sexed-up outfits finally in place, the fashion presentation started with pretty, underwear-inspired outfits. InDigital To counteract the sugary colours, Wang offered tangy shades like neon green, vivid purple or turquoise.

3.3.4 Dragons' Den - Entrepreneurs - Adejare Doherty Luxury brands must redefine the way they do business | Media Network There were times when China was the holy grail for global retailers. Logo-obsessed Chinese buyers seeking opulence were armed with cash fresh from the economic boom. Luxury retail brands flocked to the new market, with the result of 35% of sales for brands such as Omega, Harry Winston and Balmain coming from Greater China, according to estimates by Exane BNP Paribas. The region is responsible for a whooping 25% of sales at Burberry and 20% of sales at Prada. The strategy of growth by opening stores in emerging and existing markets is neither new nor unique to luxury retail. It is a reflection of the modus operandi of the industrial age, where scaling growth is linked to incessant production. The logic of this is that if consumers aren’t buying your stuff, create more stuff. From 2008 to 2011, there was a 42% spike in the number of luxury retail stores in Asia, compared with a 28% rise in Europe and 5% rise in North America, according to Lux Redux report by Boston Consulting Group.

New York Fashion Week 2016: Bella Hadid Falls On Michael Kors Runway, Handles It Like A Boss | Huffington Post 3.8.1 Boston Matrix, Culture and Dividend Yield These two pieces of video evidence on South Korean multinational giant Samsung are pure business studies gold - particularly for students preparing their evidence for AQA BUSS4. Samsung is a highly diversified multinational that is the most significant firm in the South Korean economy. It has achieved a strong record of improved profitability, quarter after quarter, as demand for its product portfolio has grown, particularly mobile devices. However, in January 2014 it announced that it expected to suffer a fall in profits, It expects to make an operating profit of 8.3 trillion won ($7.8bn; £4.8bn) for the last quarter of 2013, down 18% from the previous three months. The two videos below explore the implications of the recent Samsung announcement. The first takes very much a business strategy perspective, using the Boston Matrix as a model of strategic choice to outline some of the issues and options for Samsung.

DKNY Spring 2017 Collection At the High Line for DKNY's spring 2017 runway show, laser lights covered the public park and its surrounding buildings, while a faint veil of fog hovered over the audience as the runway changed colors from bright orange to cool blue. Welcome to designers Dao-Yi Chow and Maxwell Osborne's futuristic "Neo Soho." With all eyes on the New York-focused brand's future, the duo aimed for newness with their third collection — or, as the show notes describe it, "a solutions-based foundation to the millennial wardrobe." If CEO Morris Goldfarb of New York-based apparel group G-III (which acquired Donna Karan International in July for $650 million) is betting on DKNY to be its "billion dollar trophy," then Chow and Osborne are going to have to design like a billion-dollar brand. See the spring 2017 DKNY collection in the gallery below.