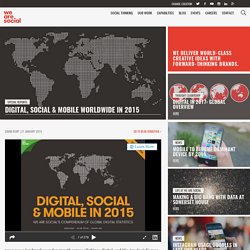 Including stats for more than 240 countries around the world, and profiling 30 of the world's biggest economies in detail, this report is the most comprehensive, free compendium of up-to-date digital statistics and data you'll find. So what do its 376 pages reveal? The Headlines As we've seen in our on-going series of Digital Statshot reports, mobile increasingly dominates the digital world, and we're confident that 'ubiquitous connectivity' will gather even more pace during 2015, as cheaper handsets and more affordable data connections reach further around the world.

Based on the trends within this data, we expect that mobile will help to push internet penetration beyond 50% of the world's population during mid to late 2016. Singapore and the UK follow, with 9.1 Mbps and 8.1 Mbps respectively. Digital, Social & Mobile Worldwide in 2015 - We Are Social UK. Global sustainability report oct 2015. Nielsen Global Health and Wellness Report January 2015. Don't Buy This Jacket: Lessons in Successful Values Marketing. Ask any member of the Outdoor Industry Association’s Sustainability Working Group or Sustainable Apparel Coalition and they will tell you consumers are not the ones driving sustainability. 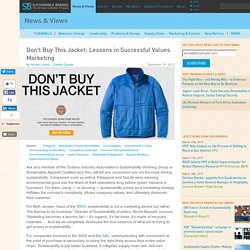 Companies such as prAna, Patagonia and GoLite were weaving environmental good into the fibers of their operations long before ‘green’ became a buzzword. For them, using — or abusing — sustainability purely as a marketing strategy deflates the concept’s complexity, dilutes company values, and ultimately disserves their customer. For Beth Jensen, head of the SWG, sustainability is not a marketing device but rather “the license to do business.” Director of Sustainability at prAna, Nicole Bassett, concurs: “Marketing becomes a laundry list — it’s organic, it’s fair trade, it’s made of recycled materials. ... And we’ve completely destroyed the true essence of what we’re trying to get across in sustainability.”

This doesn’t trouble the best companies. Barriers and Benefits: Changing Behavior Through Social Marketing. Indonesian school children learn the importance of handwashing through Lifebuoy's campaign, which reached over 800,000 children in 2011 | Image credit: Unilever Promoting behavior change is something that Lifebuoy knows well. 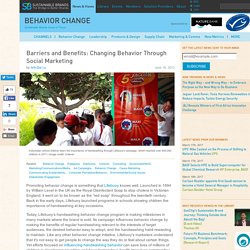 Launched in 1894 by William Level in the UK as the Royal Disinfectant Soap to stop cholera in Victorian England, it went on to be known as the “red soap” throughout the twentieth century. Back in the early days, Lifebuoy launched programs in schools showing children the importance of handwashing at key occasions. Today, Lifebuoy’s handwashing behavior change program is making milestones in many markets where the brand is sold. Its campaign influences behavior change by making the benefits of regular handwashing relevant to the interests of target audiences, the desired behavior easy to adopt, and the handwashing habit rewarding to maintain. Social marketing’s unique principles All 4Ps must reinforce the brand promise. Reach for the low-hanging fruit first. PR092214 Note only 150 Ads 2mk. Gx deloitte millennial survey 2017 executive summary. 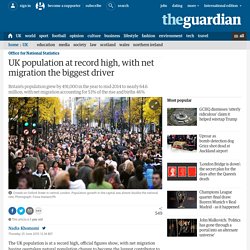 The Office for National Statistics said 582,600 migrants arrived in the UK between mid-2013 and mid-2014, compared with 322,900 people who left the country. An ONS spokesman said the statistics meant the UK population had grown by 491,100 since2013, a 0.77% rise to 64,596,800. This is marginally higher than the annual increase of 0.75% seen over the last decade. The last year in which net migration was larger than natural population growth – the balance of births and deaths – was 2011. The number of births in the year to mid-2014 was down compared with the previous year, continuing the downward trend seen since 2012, an indication that last decade’s baby boom could be slowing.