Tanzanian company creates furniture inspired by nature. Tanzania: Zanzibar Begins Branding Its Cloves, Other Spices to Win Market. Photo: State House/Daily News Zanzibar President, Dr Ali Mohamed Shein (centre) and his Second Vice-President, Ambassador Seif Ali Iddi (in glasses left), get briefing from Zanzibar State Trading Corporation (ZSTC) staff on how they sort cloves prepared for sell parked at bottles with special mark when they visited their pavilion at the launch of phase I branding clove in the Isles which goes with the 53rd Revolution Anniversary. 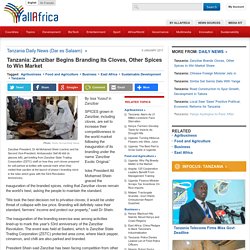 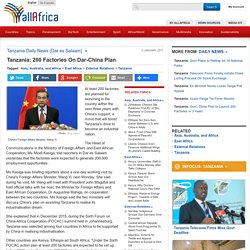 At least 200 factories are planned for launching in the country within the next three years with China's support, a move that will boost Tanzania's drive to become an industrial nation. The Head of Communications in the Ministry of Foreign Affairs and East African Cooperation, Ms Mindi Kasiga, told reporters in Dar es Salaam yesterday that the factories were expected to generate 200,000 employment opportunities. Ms Kasiga was briefing reporters about a one-day working visit by China's Foreign Affairs Minister, Wang Yi, next Monday.

She said during his visit, Mr Wang will meet with President John Magufuli and hold official talks with his host, the Minister for Foreign Affairs and East African Cooperation, Dr Augustine Mahiga, on cooperation between the two countries. Other countries are Kenya, Ethiopia ad South Africa. China is the second largest investor and trading partner with Tanzania. Tanzania: JPM's Era Ushers in 1,423 Factories. Photo: The Citizen President John Magufuli at the processing factory in the outskirts of Dar es Salaam. 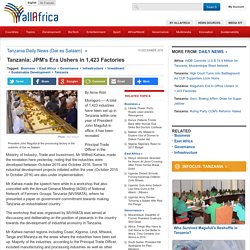 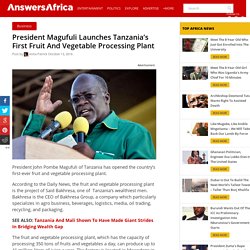 According to the Daily News, the fruit and vegetable processing plant is the project of Said Bakhresa, one of Tanzania’s wealthiest men. Bakhresa is the CEO of Bakhresa Group, a company which particularly specializes in agro business, beverages, logistics, media, oil trading, recycling, and packaging. SEE ALSO: Tanzania And Mali Shown To Have Made Giant Strides In Bridging Wealth Gap The fruit and vegetable processing plant, which has the capacity of processing 350 tons of fruits and vegetables a day, can produce up to 41 million liters of juice a year.

The factory is located in Mwandege in Mkuranga District, Coast Region. President Magufuli was full of praise for Said Bakhresa whom he applauded for creating employment opportunities for Tanzanians. Tanzania: Choppers - Made in Tanzania. Photo: Daily News. 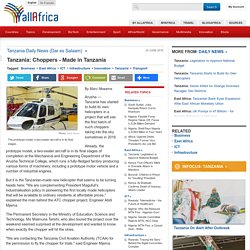 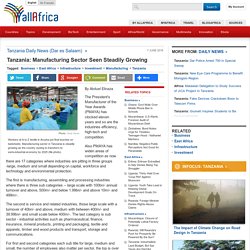 Manufacturing sector in Tanzania is steadily growing as the country eyeing to transform to semi-industrial economy by 2025 (file photo). By Abduel Elinaza The President's Manufacturer of the Year Awards (PMAYA) has clocked eleven years and so are the industries efficiency, high-tech and competition. Tanzania to invest $3bn to build Africa’s biggest fertilizer-producing factory - Ecofin Agency. (Ecofin Agency) - Tanzania plans to invest $3 billion to build a fertilizer-producing unit. 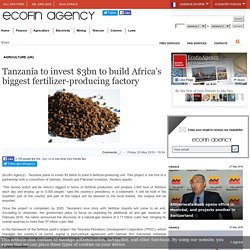 This project is the fruit of a partnership with a consortium of German, Danish and Pakistani investors, Reuters reports. “This factory which will be Africa’s biggest in terms of fertilizer production, will produce 3,800 tons of fertilizer each day and employ up to 5,000 people,” said the country’s presidency in a statement. It will be built in the Southern part of the country and part of the output will be directed to the local market, the surplus will be exported. Tanzania: Concern As 60 Percent of Factories Close Down in Arusha. By Zephania Ubwani Arusha — At the regional commissioner's office in Arusha these days it is not easy to get information about industries. 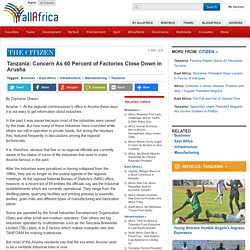 In the past it was easier because most of the industries were owned by the state. Dar set to produce 5,000 tractors yearly. TANZANIA is set to start assembling tractors and related equipment towards its strategy of modernising agriculture, thanks to a concessionary loan of 110 million US dollars (about 220bn/-) from the government of Poland. 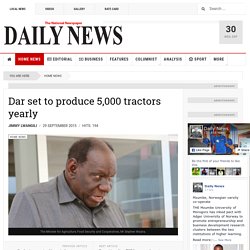 The Minister for Agriculture, Food Security and Cooperatives, Mr Stephen Wasira, said the envisaged plant will have the capacity to assemble 5,000 tractors per annum. Dar es Salaam Is the New Brewery Hot Spot. Lagos and Dar es Salaam are the new brewery hot spots, according to U.S. mutual fund managers as they tap Africa’s emerging beer companies in pursuit of long-term returns on investment. 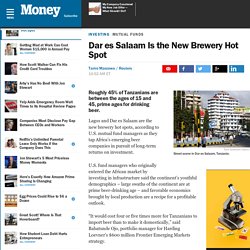 U.S. fund managers who originally entered the African market by investing in infrastructure said the continent’s youthful demographics – large swaths of the continent are at prime beer-drinking age – and favorable economics brought by local production are a recipe for a profitable outlook. “It would cost four or five times more for Tanzanians to import beer than to make it domestically,” said Babatunde Ojo, portfolio manager for Harding Loevner’s $600 million Frontier Emerging Markets strategy.

Dr. Adelhelm Meru, Director General of the Tanzania Export Processing Zone Authority (EPZA) announced yesterday during an exclusive interview with TanzaniaInvest.com that the Authority started receiving interest from parties for the development of 4 new Export Processing Zones. The 4 projects for which planned is already completed are: 1) Bagamoyo Export Processing Zone and commercial Industrial Township as an alternative to the currently congested Dar es Salaam port. 2) Mtwara Freeport Zone to operate as a supply base to the undergoing oil and gas exploration and extraction projects.