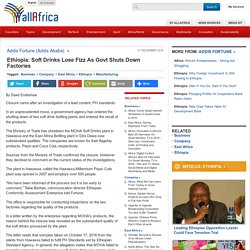 In an unprecedented move, a government agency has ordered the shutting down of two soft drink bottling plants and ordered the recall of the products. The Ministry of Trade has shutdown the MOHA Soft Drinks plant in Hawassa and the East Africa Bottling plant in Dire Dawa over substandard qualities. The companies are known for their flagship products, Pepsi and Coca Cola, respectively. Ethiopia: No More Importation! Opinion It is six decade plus years ago since Ethiopia first acquainted with the sugar industry. 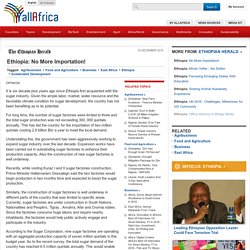 Given the ample labor, market, water resource and the favorable climate condition for sugar development, the country has not been benefiting as to its potential. For long time, the number of sugar factories were limited to three and the total sugar production was not exceeding 300, 000 quintals annually. Ethiopia: JV Formed to Assemble Energy Meters.

Subsidiary of Jupiter Group has formed joint venture with a Chinese electronics manufacturer to assemble energy meters in Ethiopia. 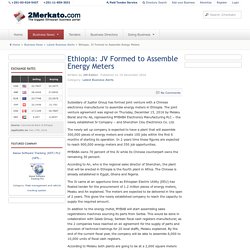 The joint venture agreement was signed on Thursday, December 15, 2016 by Melaku Bisrat and Hu Ab, representing MYBABA Electronics Manufacturing PLC – the newly established JV Company – and Shenzhen Clou Electronics Co. Ltd. The newly set up company is expected to have a plant that will assemble 300,000 pieces of energy meters and create 100 jobs within the first 6 months of starting its operation. In 2 years time these figures are expected to reach 900,000 energy meters and 350 job opportunities. Ethiopia: Hawassa Industrial Park to Be Inaugurated. By Zelalem Girma The Ethiopian Industrial Parks Development Corporation (IPDC) said that Hawassa Industrial Park constructed at a cost of 250 million USD which the larges specialized apparel and textile park on the continent will be inaugurated on July 13, 2016. 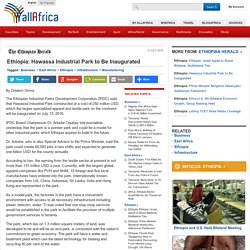 IPDC Board Chairperson Dr. Arkebe Oqubay told journalists yesterday that the park is a pioneer park and could be a model for other industrial parks which Ethiopia aspires to build in the future. Dr. Arkebe, who is also Special Advisor to the Prime Minister, said the park could create 60,000 jobs in two shifts and expected to generate one billion USD for the county annually. 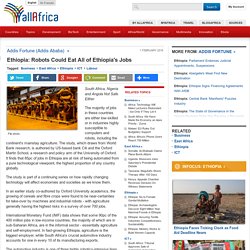 South Africa, Nigeria and Angola Not Safe Either The majority of jobs in these countries are either low-skilled or in industries highly susceptible to computers and robots, including the continent's mainstay agriculture. The study, which draws from World Bank research, is authored by US-based bank Citi and the Oxford Martin School, a research and policy arm of the University of Oxford. It finds that 85pc of jobs in Ethiopia are at risk of being automated from a pure technological viewpoint, the highest proportion of any country globally.

The study is part of a continuing series on how rapidly changing technology will affect economies and societies as we know them. Low wages draw international textile companies to Ethiopia. Sewing machines rattle away in the huge GG Super Garment factory in Debre Zeyit, some 45 kilometers (28 miles) southeast of the Ethiopian capital, Addis Ababa. 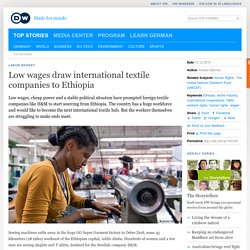 Hundreds of women and a few men are sewing singlets and T-shirts, destined for the Swedish company H&M. As a result of rising salaries and growing labor unrest in Asia, an increasing number of foreign companies have started moving their production to Ethiopia. According to factory manager Joseph Elisso, the conditions in the East African country are far more favorable. "Ethiopia is stable and peaceful, electrical power is cheap and labor costs are very low," he explains. A roaring economy: vehicle industry flourishes in Ethiopia. Ethiopia: Industrial Parks Attracting Foreign Investment. By Abebe Wolde-Giorgis Many has been said about the success story of the Ethiopian economic progress and the two digit growth which still continues. 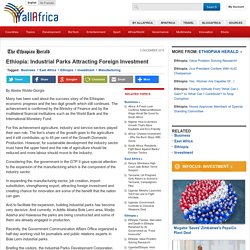 The achievement is confirmed by the Ministry of Finance and by the multilateral financial institutions such as the World Bank and the International Monetary Fund. For this achievement agriculture, industry and service sectors played their own role. The lion's share of the growth goes to the agriculture and it still contributes up to 45 per cent of the Growth Domestic Production. However, for sustainable development the industry sector must have the upper hand and the role of agriculture should be reduced and more labour should move to the industry. A roaring economy: vehicle industry flourishes in Ethiopia. Ethiopia Sets Up First Vehicle Manufacturing And Assembly Plant. Ethiopia has opened its first vehicle manufacturing and assembly factory at a military base and plans to use local labor to produce automobiles for both local consumers and export. 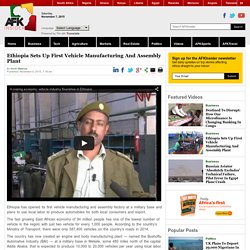 The fast growing East African economy of 94 million people has one of the lowest number of vehicle in the region with just two vehicle for every 1,000 people. According to the country’s Ministry of Transport, there were only 587,400 vehicles on the country’s roads in 2014. The country has now created an engine and body manufacturing plant — named the Bushoftu Automative Industry (BAI) — at a military base in Mekele, some 480 miles north of the capital Addis Ababa, that is expected to produce 10,000 to 20,000 vehicles per year using local labor.

This is estimated will generate $96 million annually for the government. “This is a light-duty manufacturing plant. Ethiopia plans becoming top textile producer by 2025 - new Business Ethiopia (nBE) Ethiopia plans to be the top textile and garment hub in Africa and be among the top 10 in the world by 2025, government official said this morning. 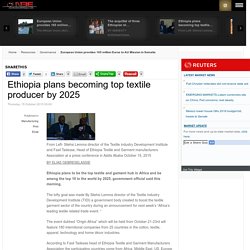 The lofty goal was made By Silehsi Lemma director of the Textile industry Development Institute (TIDI) a government body created to boost the textile garment sector of the country during an announcement for next week’s “Africa’s leading textile related trade event. “ The event dubbed “Origin Africa” which will be held from October 21-23rd will feature 180 interntional companies from 25 countries in the cotton, textile, apparel, technology and home décor industries. Ethiopia Plans Export Hubs With $10 Billion Factory Parks. Africa has the potential to replace China as a global manufacturing center AFRICANGLOBE – Ethiopia is targeting $1 billion of annual investment in industrial parks over the next decade to boost exports and make it Africa’s top manufacturer, a special adviser to Prime Minister Hailemariam Desalegn said. 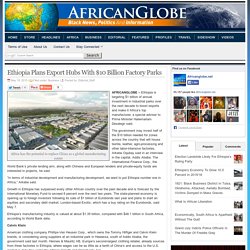 The government may invest half of the $10 billion needed for zones across the country that will house textile, leather, agro-processing and other labor-intensive factories, Arkebe Oqubay said in an interview in the capital, Addis Ababa. The International Finance Corp., the World Bank’s private lending arm, along with Chinese and European lenders and private-equity funds are interested in projects, he said. “In terms of industrial development and manufacturing development, we want to put Ethiopia number one in Africa,” Arkebe said. Ethiopia’s manufacturing industry is valued at about $1.35 billion, compared with $48.1 billion in South Africa, according to World Bank data. Ethiopian businesses adopt Japanese kaizen philosophy. Ethiopian sheep skin keeping Europeans warm this winter. The leather industry is one of Ethiopia's biggest foreign exchange earners, and Pittards, a U.K. -based leather company, has seen the potential.

Ethiopia: Break Rubber Factory to Start Production in Five Months. Ethiopia: Company to Build U.S. $500 Million Textile Factory in Ethiopia. By Nesru Jemal A Chinese delegation has disclosed that it has finalized pre-investment assessment to build a huge textile factory in Addis Ababa with over 500 million USD. President Mulatu Teshome held talks on Tuesday with a four-person Chinese business delegation led by Kong Xiangjun, Board Chairman of Giangsu Lianfa Textile Company Limited. On the occasion, Xiangjun told President Mulatu that his company has decided to invest in Ethiopia after making similar pre-investment assessments in Kenya, Uganda, and Tanzania.

The textile industry would create more than 20,000 jobs when it goes operational, it was learnt. Garment-making finds new low-cost home in Ethiopia. As basic wages soar in China, low-end manufacturing is starting to shift to cheaper locations around the world, and frontier African nations such as Ethiopia are positioning themselves to reap the benefits. With rock-bottom wages, cheap and stable electricity and improving transport infrastructure, the continent’s most populous nation after Nigeria is building a reputation for producing clothes, shoes and other basic goods.

The sector is still in its infancy in what was for decades a Communist-run economic backwater. Bureaucracy and poor transport links mean business costs aren’t quite as low as they might be. But state investment in factory zones and the arrival of firms from Turkey, India, the Gulf and China suggest industrialization is finally taking root in the east African giant, where many still rely on subsistence agriculture. Invest in Ethiopia Wine and Invest. Modern Electricity Meter Manufactured in Ethiopia. Why ‘Made in Ethiopia’ Could Be The ‘Next Made in China’ - Frontier Markets News - Emerging & Growth Markets. Heineken’s new factory in Ethiopia to commence production. Details Published on Monday, 10 February 2014 10:12 Written by newbusinessethiopia. Ethiopia's Nyala Motors Unveils Plan to Assemble Nissan Vehicles in Ethiopia. The Ethiopian Electric Power Corporation is working to address the persistently increasing demand for power in Ethiopia announced Miheret Debebe Chief Executive Officer of the Corporation.

It is expected that electric coverage in Ethiopia will reach 75% in five years when the country is able to generate 8000-10000 MW he said. The completion of projects initiated to increase the capacity of the nation to generate more electric power will allow Ethiopia to export power to neighboring countries according to Miheret. Business Television - Online Corporate Video Reports. First Ethiopian Print Cartridge Assembler Inaugurated. Ethiopia’s Ezana Builds $17.8m Gold Plant. Ethiopia has on of Africa’s fastest growing economies AFRICANGLOBE – Ezana Mining Development, a wholly-owned Ethiopian private company, is building a $17.8 million gold plant in Tigray, it was announced on Thursday.

According to reports the contract is to build a carbon-in-leach (CIL) gold plant at Terakimti, in northern Tigray, near Shire Endaselassie Town. It also said the construction had already begun at the plant, which is scheduled to be operational by the end of this fiscal year. Ezana and the Ministry of Mines (MoM) signed an agreement three weeks ago, enabling Ezana to produce 2.017kg of gold within two years, according to Addis Fortune. “The technology we will use in the gold plant is no different from the one MIDROC uses, at its Lega Dembi mine in Southern region,” a senior manager of Ezana, who asked for anonymity as he is not authorised to speak to the media, said on Thursday.

This was largely accounted for by gold, of which 12tn was exported for a total of $602.4 million. Manufacturing sector generates USD 103 mln. Ethiopia: Lifan Motors to Open Assembly Plant. China's Lifan Industry Group Company, one of China's largest private manufacturers of motorcycles and passenger cars, has announced plans to launch a new assembly plant in Ethiopia next year with an annual capacity of 1,500-2,000 vehicles at a cost of up to US$5 million. Ethiopia: Billionaire Mohammed al-Amoudi Signs $600 Million Steel-Plant Deal. Meet Today’s Ethiopian Consumer.

The factory has undergone three expansions since it was first established 28 years with an initial production potential of just 100,000 quintals. Huajian of China’s Ethiopian Export Zone May Generate $4 Billion. Africa Rising: China steps up production in Ethiopia with drill instructors, investors.