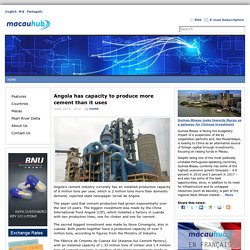 The paper said that cement production had grown exponentially over the last 14 years. The biggest investment was made by the China International Fund Angola (CIF), which installed a factory in Luanda with two production lines; one for clinker and one for cement. Bengo plant produces 500.000 tons of steel annually. Angola: Contract for manufacturing of energy meters signed.

Angola may have biggest wheat production in Africa. On the continent, the countries taken as a reference in wheat processing into flour produce between 600 to 700 tons per day, so the GMA manager believes that in terms of productive capacity the new industry will have no parallel. 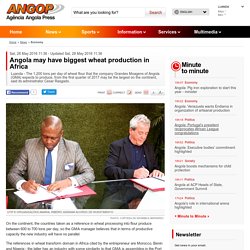 Angola: New Vinegar Plant Opens in Luanda. The future is bright for Angola’s steel industry. While 1975 heralded Angola’s independence, the year also marked the start of a 27-year civil war that inflicted deep scars across the country. 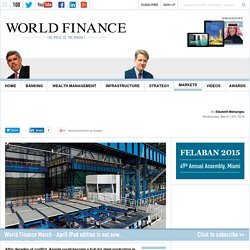 As the two former independence forces fought for power, railways, roads, bridges and agricultural infrastructural were destroyed. Foreign investment remained far at bay, thus hurtling the country’s economy back decades in its development. Yet in the years that have since followed the end of this bloody chapter, Angola’s recovery is occurring at a rate faster than many could have expected.

In fact, the once warring state has become one of the world’s fastest growing economies, surpassing even China between 2001 and 2010 with an annual average GDP growth of 11.1 percent, according to the IMF (see Fig. 1). Time for change Being so wholly dependent on its oil sector for economic growth, Angola has recently hit a stumbling block. Angola is at a pivotal point in both its history and economic development.

Angola is recycling guns from its civil war into steel to rebuild the country. In April, harvest season begins in Southern Africa. 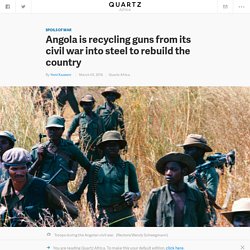 An ongoing drought means the season will yield a historically poor crop. Countries including Malawi, South Africa, and Zimbabwe will have major shortfalls of grain. By one count, more than 20 million people in the region already have limited access to food—notwithstanding the drought. Without intervention, the next year will put those people and millions more at risk of malnutrition or even starvation. But knowing all this makes intervention more possible than ever. Famines are a powerful illustration of how suddenly nature can undercut a poor or poorly prepared society. Today, analysts employing new sources of information, better technology, and networks of human monitors have made it possible to foresee agricultural disaster far enough ahead so that resources can be mobilized to prevent starvation.

How to foresee a crisis Many different organizations monitor food security around the world. Measuring a harvest before it happens. Industrial development hubs in Angola create more than 12,000 jobs. December 11th, 2015 News. 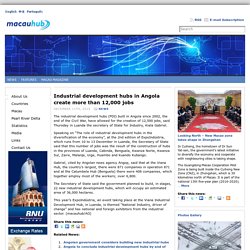 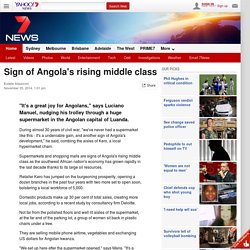 During almost 30 years of civil war, "we've never had a supermarket like this - it's a undeniable gain, and another sign of Angola's development," he said, combing the aisles of Kero, a local hypermarket chain. Supermarkets and shopping malls are signs of Angola's rising middle class as the southwest African nation's economy has grown rapidly in the last decade thanks to its large oil resources. Retailer Kero has jumped on the burgeoning prosperity, opening a dozen branches in the past four years with two more set to open soon, bolstering a local workforce of 5,000. Domestic products make up 30 per cent of total sales, creating more local jobs, according to a recent study by consultancy firm Deloitte.

The two new factories—one for making fabric and another for making clothing items—are being built on the same location that once housed the Satec textile factory building, according to Angolan news agency ANGOP. Francisco Diogo, Cambambe city manager, said the plant likely to start production in 2015, and the creation of 2,000 direct jobs. New textile factory was built by a Japanese private investment will be equipped with the latest technology. Is also expected to launch the new fabric and garment units to re-stimulate industrial park Dondo, who was regarded as one of the four centers of industry. Meanwhile, cotton spinning and weaving operations this year, most likely in Africa Textil restart. 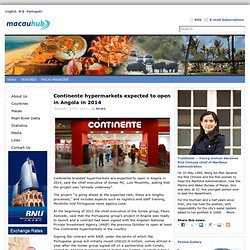 The project “is going ahead at the expected rate; these are lengthy processes,” and includes aspects such as logistics and staff training, Moutinho told Portuguese news agency Lusa. Savana group paint factory due to start operating in Huíla, Angola this year. January 9th, 2013 News The Tecnotintas paint factory, part of Angola’s Savana group, is due to start operating in Huíla province this year, according to Angolan weekly newspaper Expansão. 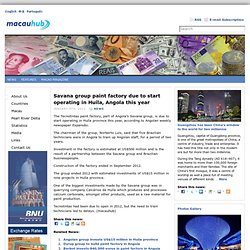 The chairman of the group, Norberto Luís, said that five Brazilian technicians were in Angola to train up Angolan staff, for a period of two years. Investment in the factory is estimated at US$500 million and is the result of a partnership between the Savana group and Brazilian businesspeople. Construction of the factory ended in September 2012. The group ended 2012 with estimated investments of US$15 million in nine projects in Huíla province. One of the biggest investments made by the Savana group was in quarrying company Calcários da Huíla which produces and processes calcium carbonate, amongst other products, used as a raw material for paint production.

Tecnotintas had been due to open in 2012, but the need to train technicians led to delays. Related News: Portuguese group Secil plans to build second cement plant in Angola. December 5th, 2012. 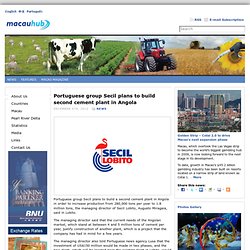 Economics - Bengo Province to gain twelve new factories. Economics - Textile factory to start production by 2013. Economics - Tomato processing plant to be unveiled. Luanda-Bengo special economic zone in Angola to have 26 factories by the end of the year. May 22nd, 2012 News The executive commission of Sonangol Investimentos Industriais (SIIND) plans by the end of this year to have 26 industrial units operating in the Luanda-Bengo Special economic Zone (ZEE), the company’s business director, Gaspar Neto said Monday. 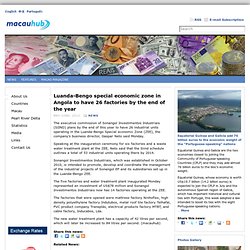 Speaking at the inauguration ceremony for six factories and a waste water treatment plant at the ZEE, Neto said that the Siind schedule outlines a total of 53 industrial units operating there by 2014. Angola: Trade Minister Foresees Progress in Textile Industry.