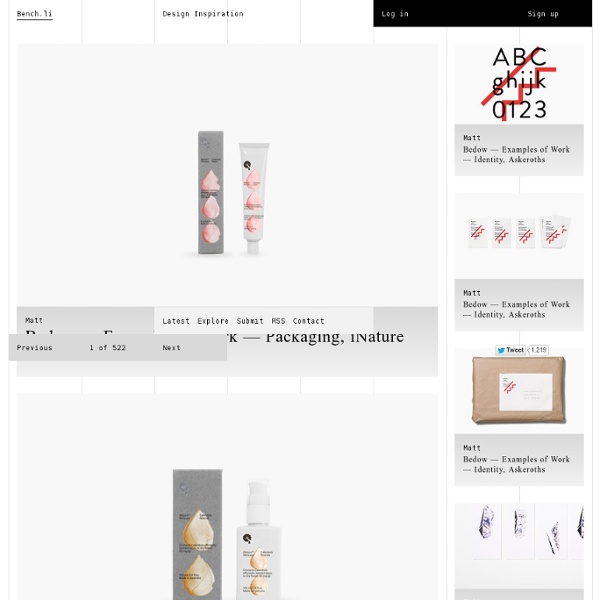 Introducing...Gabriela Maskrey who makes in-flight magazines sexy with impeccable design Where do you work? I am based in Bordeaux at the moment. I moved here in August from Barcelona after finishing my masters in graphic design and working for almost a year in Javier Mariscal’s studio. Bordeaux is an amazing place; great wine and only one hour away from the Atlantic Ocean (it is vital for me to live in a place near the sea, as I grew up next to it back in Lima). I to and fro to London fairly regularly, sometimes for work but also to get my fix of my friends in my favourite European city.

Sky Survey The Sky Survey, 5,000 Megapixel image of space. There really isn’t too much I can write about this, other than you should probably be prepared to set your status to “Away” for a couple hours. Before doing that, check out the story behind it on the site as well as the iPad app. Vintage Typography Tutorial using Ornamental Styles Vintage and ornamental typography can yield some truly impressive effects for graphic designers, and have applications in everything from poster design to logo design. Vintage typography can involve ornamental or floral elements, vectors, as well as some vibrant colors contrasted against the background. Today, we have a great vintage typography tutorial for you to follow along with. You’ll see how to use a scanned image as the basis for ornamental text, and then how to work with stock images and Photoshop to create a vintage typography artwork. If you like this vintage typography tutorial, check out our other great text effect tutorials:

We Love Magazines Another Escape launched earlier this year and number two has just been published. Like last time, it’s divided into four distinct sections – Inspiration, Exploration, Process and Response – and uses these to deal with different aspects of the extraordinary in the ordinary. Octopuses, rehabilitating old machines, beekeeping and the revival of the tango all make appearances as editors Rachel and Jody spread their net wide. A personal highlight is this story about coffee preparation (below). Another Escape is a very gentle, quiet magazine that deserves your attention.

Peteski SHOP ABOUT ARCHIVE FOLLOW Instagram Twitter Facebook Google+Pinterest P L E A S E C O N S I D E R disabling AdBlock on this site, my one ad is fast, small & sophisticated. Ads Via The Deck Create Creepy, Branch Based Typography Create Creepy, Branch Based Typography Learn how to create some creepy typography created out of winter branches: Final Image As always, this is the final image that we’ll be creating: Step 1

Mâos 31 – Magazine design on Editorial Design Served Graphic design is a form-giving process. The forms it creates don't merely carry content, they become part of it because every choice of typeface and of typographic arrangement, of colour, of spacing, of photographic treatment, of paper, of printing technique, of format and finishing becomes a way of saying something. And every choice has implications for the way in which content is understood and interpreted. Graphic Design // Type You should follow Designspiration on Twitter and Facebook for site news. — Shelby Designspiration Search Color mediumsmalllarge Discover Ads via The Deck BFG is hiring a Senior Designer in Bluffton/Hilton Head, SC

Creating Smoke In Photoshop From Scratch (Noscope) - StumbleUpon Using Photoshop and a specific technique, it’s rather easy to create something that looks like smoke or fog—from scratch. It’s not as good as actual smoke photographed on a black background, but it’s much easier to come by. Here’s the trick… Doodle Draw a doodle. Preferrably keep the doodle in its own layer with a black background beneath. Blog « Stitch Design Co. Rewined Merchandise Booklet July 25, 2014 A visual guide for Rewined retailers. Beautifully shot by Olivia Rae James. Editorial Design Inspiration – Skin Deep magazine This website uses cookies to improve your experience. We'll assume you're ok with this, but you can opt-out if you wish. Accept or Read More Skin Deep is a magazine by graphic designer Tessa Simpson that aims to question the portrayal of women in mainstream media. The imagery inside is a mix of simple film-photography and collage that sits alongside articles on subjects such as shaving and the use of make-up. Also included inside is a photographic insert that focuses on the daily ‘beauty’ routines of women.

North America Wildlife Mark Weaver has got to be one of the most consistently stellar (not to mention prolific) designers I know. I saw his “How To Destroy Angels” cover printed tinty tiny next to a review in Rolling Stone and knew immediately, Mark Weaver! The prints above are from his North American Wildlife limited edition series. They are for sale on his shop as of this week. Be sure to also check out Mark’s answer to how he overcomes creative block: …”To achieve full creative potential I must sit in the woods, watch Mad Men, and listen to Boards of Canada simultaneously.” House with Exterior Made Of Clinker Bricks and Wood This house has an exterior which is made of combination of clinker bricks and African teak wood. It is located near to Moscow, Russia, so the climate could be tough there. Even though there are plenty of snow during winters the house has flat roof and a lot of windows.

John Good - Creative Publishing The John Good group is the largest publisher of theatre programmes in the UK, producing up to six million programmes a year for customers from every corner of the British Isles, including London’s West End. What makes us unique is that we offer a full publishing service that includes graphic design and illustration, editorial and picture research, liaison with production companies, dedicated account management, printing and delivery. As programme publishers we recognise both the artistic value and the importance of programmes as an effective source of income and a unique opportunity to keep your organisation at the forefront of your audience’s mind.