Synchrony and Creativity – How You Can Effortlessly Create Terrific Ideas. 3rd January 2016 By Tomasz Kopec, MD Guest Writer for Wake Up World I am sure everyone has had an ‘aha’ moment. 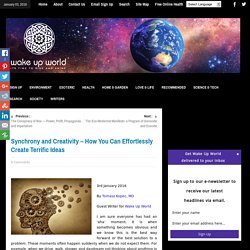 It is when something becomes obvious and we know this is the best way forward or the best solution to a problem. These moments often happen suddenly when we do not expect them. On the other hand, many people say that the harder they try the less likely they come up with a new, fresh idea. In this article I will explain you what creativity really is, how it works in the brain, and how you can let it happen to you.

What is Creativity? According to the Oxford Dictionary creativity is “the ability to use skill and imagination to produce something new or to produce art; the act of doing this.” I would suggest simplifying it a bit and say that creativity is when we invent something new by connecting many elements of reality together in one piece. Say, if we connect … we can create a cool looking mini collapsible silicone funnel you can see below. Inventions student page. Bill Nye - Simple Machines - SchoolTube. MINT Center - The University of Alabama. Simple Machines.

Simple Machines. ASPIRE Simple & Comples Machines. In an unknown time and an uncharted place, the ASPIRE crew has accepted the challenge to assist in the completion of a city being constructed of massive stones. 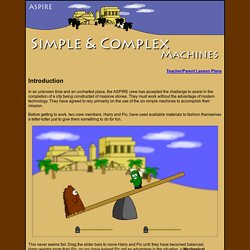 They must work without the advantage of modern technology. They have agreed to rely primarily on the use of the six simple machines to accomplish their mission. Before getting to work, two crew members, Harry and Pic, have used available materials to fashion themselves a tetter-totter just to give them something to do for fun. This never seems fair. Drag the slider bars to move Harry and Pic until they have becomed balanced. Simple machines give us an advantage by changing the amount, speed, or direction of forces. Would you have a problem if the door knob came off in your hand before you unlatched the door? From day to day do you find yourself using any of the six simple machines: Wedge Lever Incline Plane Pulley Wheel Screw.

Simple Machines: Facts (Science Trek: Idaho Public Television) Once upon a time a person needed to move something heavy. 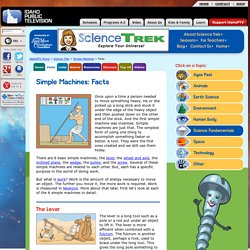 He or she picked up a long stick and stuck it under the edge of the heavy object and then pushed down on the other end of the stick. And the first simple machine was invented. Simple machines are just that. The simplest form of using one thing to accomplish something faster or better. A tool. InventorsToolbox: The Elements of Machines. Simple Machines: These devices were all in common use for centuries before Leonardo's time. 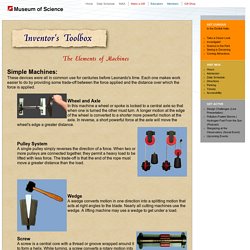 Each one makes work easier to do by providing some trade-off between the force applied and the distance over which the force is applied. Wheel and Axle In this machine a wheel or spoke is locked to a central axle so that when one is turned the other must turn. A longer motion at the edge of the wheel is converted to a shorter more powerful motion at the axle. In reverse, a short powerful force at the axle will move the wheel's edge a greater distance. Pulley System A single pulley simply reverses the direction of a force. Wedge A wedge converts motion in one direction into a splitting motion that acts at right angles to the blade. Screw A screw is a central core with a thread or groove wrapped around it to form a helix. Lever A lever is a stiff rod that rotates around a pivot point.

Gears Gears are toothed or pegged wheels meshed together to transmit motion and force. Sm1. Museum of Science and Industry: Simple Machines Game. MIKIDS for YOUR KIDS! Create Account. Vocabulary. Leonardo da Vinci. Timeline: The High Renaissance The first object of the painter is to make a flat plane appear as a body in relief and projecting from that plane. -- Leonardo da Vinci Leonardo DA VINCI (b. 1452, Vinci, Republic of Florence [now in Italy]--d. 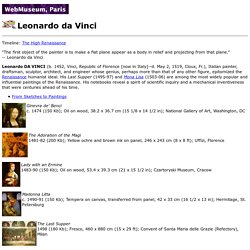 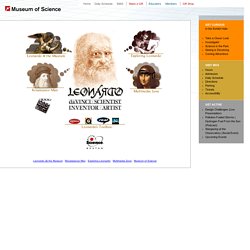