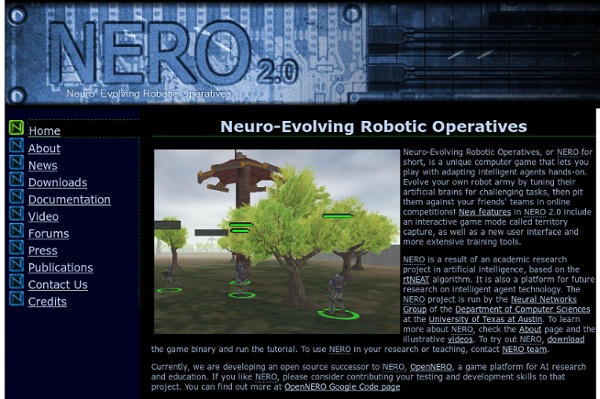 Neuro-Evolving Robotic Operatives, or NERO for short, is a unique computer game that lets you play with adapting intelligent agents hands-on. Evolve your own robot army by tuning their artificial brains for challenging tasks, then pit them against your friends' teams in online competitions! New features in NERO 2.0 include an interactive game mode called territory capture, as well as a new user interface and more extensive training tools. NERO is a result of an academic research project in artificial intelligence, based on the rtNEAT algorithm. It is also a platform for future research on intelligent agent technology. Currently, we are developing an open source successor to NERO , OpenNERO , a game platform for AI research and education. Related:  Robots and Robotics

Salad-Making Robot Gives Us a Creepy View Of the Future If ever you wanted a dead-eyed robot wielding a knife to be your next personal chef, you're in luck. The Korean Institute of Science and Technology recently unveiled CIROS, a robot that can make you salad. CIROS is designed to help out around the house; it can grasp items from the refrigerator, serve tea, scrub dishes and slice vegetables... very, very slowly. In the below video from Robot World 2012, CIROS slices a cucumber for a salad at a glacial speed, then dumps a load of dressing atop it. Gizmag writes that CIROS' head contains stereoscopic cameras and a 3D IR sensor that helps it recognize objects, like microwaves, sinks, refrigerators and dishwashers. Watch CIROS in action in the below video. Also on HuffPost: BugFest - Homepage BUG-FEST Artificial Life Experiment (primary coding: Jan 5 '98 to Jan 9 '98) Welcome to Bug Fest!! Latest version: BUGFEST 1, v1.13 (bug1v113.zip) [97k] [System Requirements] Eureka! I have found it! I've been quite pleased with this experiment, even though it did not balance itself the way I would have hoped at first (therefore requiring a few "cheats", which are now optional "failsafes"). Anyway, on with the screenshots... The following sequence of 4 images shows a very interesting situation. The information below is the same information that you will find in the documentation for the program, as of version 1.01. BugFest runs in DOS (though it is somewhat windows-friendly, meaning running under windows will not fry the system). Welcome to the Bug-Fest! My goal was to make a self-sustaining system that would also be interesting to watch. In this simulation there are a variety of bugs (when I refer to "bugs" here, I mean "critters" not "program flaws"). Now, a few specifics... The stats:

Carl Sagan on Pot This account was written in 1969 for publication in "Marihuana Reconsidered (1971)". Sagan was in his mid-thirties at that time. He continued to use cannabis for the rest of his life. The cannabis experience has greatly improved my appreciation for art, a subject which I had never much appreciated before. The understanding of the intent of the artist which I can achieve when high sometimes carries over to when I'm down. This is one of many human frontiers which cannabis has helped me traverse. Thanks Josh!

RSLSteeper launches third version of its bebionic myoelectric hand Nigel Ackland could be mistaken for a cyborg. He has a high-tech robotic hand that looks like it started life as a Formula 1 car and its movements are alarmingly lifelike. It’s called the “bebonic3” and is the latest version of bebonic series of artificial hands produced by RSLSteeper of Leeds, U.K. The myoelectric hand has been under development for a couple of years now, but the bebonic3 is moving prosthetic limbs from Captain Hook to Luke Skywalker territory. View all Artificial hands have come a long way in recent years, but it turns out the human hand is amazingly complex. While there have been a lot of advances over the past fifty years (as evidenced by the i-LIMB, ProDigits and SmartHand), many artificial hands are little more than powered hooks or pincers that often require a great deal of effort to work. The bebionic3 is designed to not only look human, but also to provide the wearer with a large degree of natural movement. The bebionic3 hand's silicone glove

Main page - Introduction to Genetic Algorithms - Tutorial with Interactive Java Applets These pages introduce some fundamentals of genetic algorithms. Pages are intended to be used for learning about genetic algorithms without any previous knowledge from this area. Only some knowledge of computer programming is assumed. You can find here several interactive Java applets demonstrating work of genetic algorithms. As the area of genetic algorithms is very wide, it is not possible to cover everything in these pages. But you should get some idea, what the genetic algorithms are and what they could be useful for. Now please choose next to continue or you can choose any topic from the menu on the left side. There are translations of these pages available as well - Portuguese one (original mirror here) by Hermelindo Pinheiro Manoel, Japanese one by Ishii Manabu and Bulgarian one by Todor Dimitrov Balabanov. You can also check recommendations for your browser or read about the background of these pages. (c) Marek Obitko, 1998 - Terms of use

AMP-Foot 2.0 prosthesis mimics human ankle's spring An amputee tests the AMP-Foot 2.0 on a treadmill Image Gallery (2 images) The majority of protheses available today that replace the lower leg, ankle, and foot are passive devices that store energy in an elastic element (similar to a coiled spring) at the beginning of a step and release during push-off to give you some added boost. While this type of prosthetic is energy efficient, it doesn't replicate the full power we get from our muscles. In order to provide that kind of energy an actuator is required, and these are often heavy and bulky. The latest version, AMP-Foot 2.0, uses an actuator to store energy in springs, which is released when needed. CAD rendering of the AMP-Foot 2.0 The result is a prosthesis that, despite utilizing actuators, weighs just five and a half pounds (2.5 kg), which is roughly the weight of a healthy foot. This isn't the only prosthesis with an actuated ankle, but the low power is key. Source: Vrije Universiteit Brussel About the Author

Langton's loops Langton's Loop, in the starting configuration. Langton's loops are a particular "species" of artificial life in a cellular automaton created in 1984 by Christopher Langton. They consist of a loop of cells containing genetic information, which flows continuously around the loop and out along an "arm" (or pseudopod), which will become the daughter loop. History[edit] In 1952 John von Neumann created the first cellular automaton (CA) with the goal of creating a self-replicating machine.[1] This automaton was necessarily very complex due to its computation- and construction-universality. Specification[edit] Langton's Loops run in a CA that has 8 states, and uses the von Neumann neighborhood with rotational symmetry. As with Codd's CA, Langton's Loops consist of sheathed wires. A colony of loops. Colonies[edit] Because of a particular property of the loops' "pseudopodia", they are unable to reproduce into the space occupied by another loop. , where A is the total area of the space in cells.