Akhenaten: Egyptian Pharaoh, Nefertiti's Husband, Tut's Father. Akhenaten was a pharaoh of Egypt who reigned over the country for about 17 years between roughly 1353 B.C. and 1335 B.C. 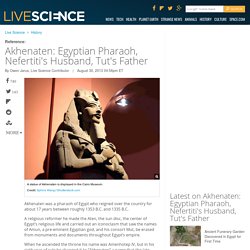 A religious reformer he made the Aten, the sun disc, the center of Egypt’s religious life and carried out an iconoclasm that saw the names of Amun, a pre-eminent Egyptian god, and his consort Mut, be erased from monuments and documents throughout Egypt’s empire. When he ascended the throne his name was Amenhotep IV, but in his sixth year of rule he changed it to “Akhenaten” a name that the late Egyptologist Dominic Montserrat translated roughly as the “Benevolent one of (or for) the Aten.” Error loading player: No playable sources found. Akhenaten: mad, bad, or brilliant? Yet rather than honour Amun, the god associated with the site, his temples were orientated towards the east, facing in the direction of the sunrise, and dedicated to a new form of the sun-god, known officially by the not-so-catchy formula of “The living one, Ra-Horus of the horizon who rejoices in the horizon in his identity of light which is in the sun disc.” 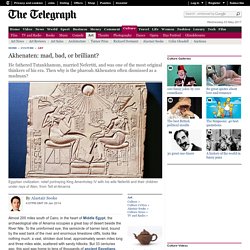 Before long this was shortened to “the Aten”, the Egyptian word for “the sun disc”, and the king had changed his name from Amenhotep (“Amun is content”) to Akhenaten (“effective for the Aten”). A number of colossal sandstone statues of the king carved for the temples of the Aten at Karnak, where they were attached to pillars in colonnades lining grand open courts, attest to the drastic convulsions coursing through Egyptian society at this time. One of them can be seen in Cairo’s Egyptian Museum, which I visited while making the BBC documentary series Treasures of Ancient Egypt. The pose and attributes are fairly standard. Akhenaten. Akhenaten (r. 1353-1336 BCE) was a pharaoh of Egypt of the 18th Dynasty. 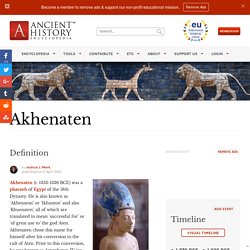 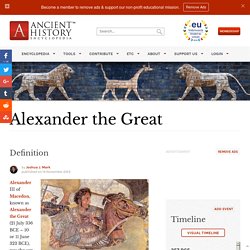 He became king upon his father’s death in 336 BCE and went on to conquer most of the known world of his day. He is known as 'the great' both for his military genius and his diplomatic skills in handling the various populaces of the regions he conquered. He is further recognized for spreading Greek culture, language, and thought from Greece throughout Asia Minor, Egypt, and Mesopotamia to India and thus initiating the era of the "Hellenistic World".

Alexander's Youth When Alexander was young, he was taught to fight and ride by Leonidas of Epirus, a relative of his mother Olympias, as well as to endure hardships such as forced marches. While it is clear that his father had a great impact on him, Alexander himself chose to see his success as ordained by divine forces. Boudica & Britain: The Roman Empire: in the First Century. The Roman Empire. Enemies & Rebels. In Britain, at the northernmost edge of the empire, Rome’s normal strategies for command and control of its provinces failed horribly. 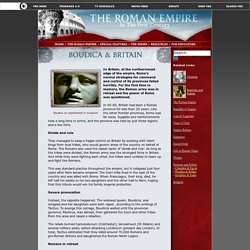 For the first time in memory, the Roman army was in retreat and the power of Rome was questioned. In 60 AD, Britain had been a Roman province for less than 20 years. Like the other frontier provinces, Rome was far away. Supplies and reinforcements took a long time to arrive, and the province was held by just three legions and a few forts. Divide and rule They managed to keep a fragile control on Britain by working with client kings from local tribes, who would govern areas of the country on behalf of Rome. This was standard practice throughout the empire, but it collapsed just four years after Nero became emperor. 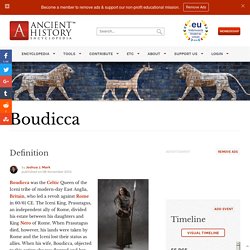 The Iceni King, Prasutagus, an independent ally of Rome, divided his estate between his daughters and King Nero of Rome. When Prasutagus died, however, his lands were taken by Rome and the Iceni lost their status as allies. When his wife, Boudicca, objected to this action she was flogged and her two daughters raped. She mounted a revolt against Rome which left the ancient Roman cities of Camulodunum, Londinium and Verulamium in ruins and over 80,000 Roman citizens of Britain dead.

She was defeated at the Battle of Watling Street by the Roman Governor Gaius Suetonius Paulinus chiefly by his judicious choice of battlefield and allowing her army to cut off its own escape route by encircling their rear with their wagons, animals and families. Causes of Boudicca's Rebellion Boudicca was flogged and her daughters raped. Boudicca's War.

Confucius - Biography - Philosopher. Confucius was an influential Chinese philosopher, teacher and political figure known for his popular aphorisms and for his models of social interaction. 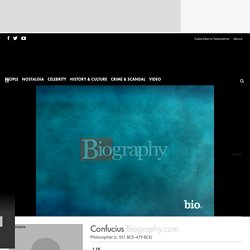 Synopsis. Cyrus the Great in Biblical Prophecy : Christian Courier. By Wayne Jackson One of the truly astounding prophecies of the Bible is found in the last verse of Isaiah 44, together with 45:1ff, (an unfortunate chapter break). 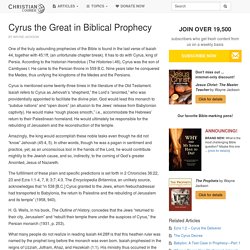 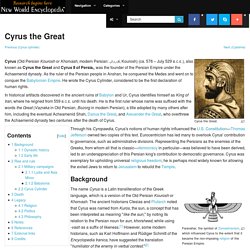 Cyrus (Old Persian Kourosh or Khorvash, modern Persian: کوروش, Kourosh) (ca. 576 – July 529 B.C.E.), also known as Cyrus the Great and Cyrus II of Persia,, was the founder of the Persian Empire under the Achaemenid dynasty. As the ruler of the Persian people in Anshan, he conquered the Medes and went on to conquer the Babylonian Empire. Cyrus the Great. Cyrus (Old Persian Kuruš; Hebrew Kores): founder of the Achaemenid empire. 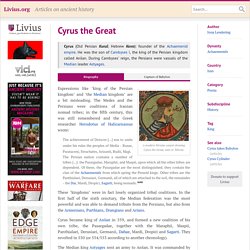 Cyrus The Great. King David. The biblical King David of Israel was known for his diverse skills as both a warrior and a writer of psalms. In his 40 years as ruler, between approximately 1010 and 970 B.C.E., he united the people of Israel, led them to victory in battle, conquered land and paved the way for his son, Solomon, to build the Holy Temple.

Almost all knowledge of him is derived from the books of the Prophets and Writings: Samuel I and II, Kings I and Chronicles I. David was the eighth and youngest son of Jesse from the kingly tribe of Judah. He was also a direct descendent of Ruth the Moabite. David began his life as a shepherd in Bethlehem. Hannibal. Hannibal (also known as Hannibal Barca, 247-183 BCE) was a Carthaginian general during the Second Punic War between Carthage and Rome (218-202 BCE). Hannibal - Ancient History. My TV provider is not listed. Why not? We are currently working on adding more TV providers. Please check back frequently to see if your TV provider has been added. Why do I need to log in to watch some video content? Viewers who verify their subscription to a TV provider get access to a deeper catalog of video content, including more full episodes.

I am able to watch on TV. Hatshepsut: First Female Pharaoh. Hatshepsut was the first female pharaoh of Egypt. She reigned between 1473 and 1458 B.C. Her name means “foremost of noblewomen.” Her rule was relatively peaceful and she was able to launch a building program that would see the construction of a great temple at Deir el-Bahari at Luxor. She also launched a successful sea voyage to the land of Punt, a place located somewhere on the northeast coast of Africa, where they traded with the inhabitants, bringing back “marvels.”

Despite the apparent success of her reign, and a burial in the Valley of the Kings, her monuments would be defaced after her death, apparently by her co-ruler and step-son/nephew Thutmose III. Error loading player: No playable sources found. Hatshepsut and Tuthmosis: a royal feud? - BBC. Hatshepsut - Ancient History. Hatshepsut was the elder of two daughters born to Thutmose I and his queen, Ahmes. After her father’s death, 12-year-old Hatshepsut became queen of Egypt when she married her half-brother Thutmose II, the son of her father and one of his secondary wives, who inherited his father’s throne around 1492 B.C. They had one daughter, Neferure. Thutmose II died young, around 1479 B.C., and the throne went to his infant son, also born to a secondary wife.

According to custom, Hatshepsut began acting as Thutmose III’s regent, handling affairs of state until her stepson came of age. Horace - Ancient Rome - Classical Literature. (Lyric Poet and Satirist, Roman, 65 - 8 BCE) Introduction | Biography | Writings | Major Works. Horace - Poet. Julius Caeser: The Roman Empire: in the First Century. The Roman Empire. Emperors. A superb general and politician, Julius Caesar (c.100 BC – 44 BC / Reigned 46 – 44 BC) changed the course of Roman history. Although he did not rule for long, he gave Rome fresh hope and a whole dynasty of emperors.

Dangerous times Born into an aristocratic family in around 100 BC, Julius Caesar grew up in dangerous times. Rome could not yet handle its own size and power. The nobility were widely discredited and order had given way to chaos. Pericles. Pericles. Pericles (495–429 BCE, whose name means "surrounded by glory") was a prominent statesman, famous orator, and general (in Greek 'Strategos’) of Athens during the Golden Age of Athens. So profound was his influence that the period in which he led Athens has been called the 'Age of Pericles’.