Scientists Made a Wave in a Lab That Looks Almost Exactly Like a Famous Artwork. A Tiny Microscope Can Now Record a Mouse's Brain in Real Time. Theconversation. Scientists Accidentally Discover New Shade of Blue. 57.7K 70Share1 In 2009, Mas Subramanian, a materials science professor at Oregon State University, was running experiments designed to create new materials for electronics. 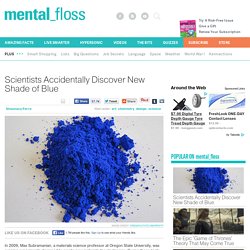 During those tests, he and his team hit on a more unexpected creation in the form of a vibrant new color. Called YInMn blue, the pigment will finally be available to artists and manufacturers later this year through an agreement with the Ohio-based Shepherd Color Company, artnet reports. The pigment is the result of heating a mixture of black manganese oxide and other chemicals to almost 2000°F. The manganese ions absorb red and green wavelengths of light, producing a durable blue color that doesn’t fade in oil or water. Google Is Trying to Patent Injectable Cyborg Eyes. It's a running joke that Google, Facebook, and Apple are turning us all into cyborgs, since our constant usage of convenient technology is making it essentially an extension of humanity. 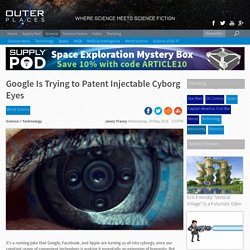 But now, Google wants to literally turn us all into cyborgs, as they are currently filing a patent to inject electronic lenses into our eyes. Google started with Google Glass, and has already been working on electronic contact lenses, but this goes a significant step further. Sony files patent for contact lens that records what you see. Although electronic devices are shrinking all the time, the idea of a smart contact lens still seems wildly ambitious. 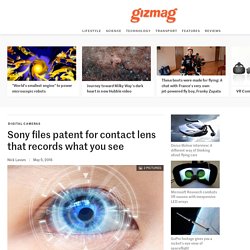 Now Sony has reached even further into the realm of the hypothetical and yanked out something that trumps all the efforts we have seen before. A patent filing by the Japanese company reveals its vision for a contact lens that not only records video and images with a simple blink, but manages to store them right there and then on the user's eyeballs. Google, Samsung and a number of research groups have all made their plans for smart contact lenses public. The motivation behind these range from glucose monitoring to augmented reality to boosting vision through telescopic lenses. Graphene optical lens a billionth of a meter thick breaks the diffraction limit. [Exclusive] Inside MIT's Self-Replicating Objects. Images: MIT When people think of self-replicating objects, images of fist-sized robot cubes or sci-fi swarms of nanobots usually spring to mind, but MIT's Self-Assembly Lab is pushing its boundaries with an experiment called Self-Replicating Spheres which eschews mechanical parts entirely. 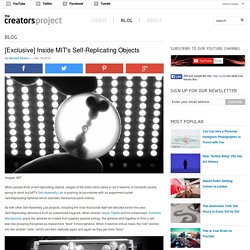 As with other Self-Assembly Lab projects, including the chair that builds itself we debuted earlier this year, Self-Replicating Spheres is built on customized magnets. When director Skylar Tibbits and his collaborator, Dimitrios Mairopoulos, place the spheres on a table that supplies passive energy, the spheres stick together to form a cell wall-like grouping that grows as researchers "feed" it more spheres. When it reaches critical mass, the "cell" divides into two smaller "cells," which can then replicate again and again as they get more "food. " The effect looks just like those old videos about cell mitosis from middle school science class, but Tibbits makes it clear that this isn't quite biology. Self-assembling electronics may soon be a reality.

We are one step closer to building self-assembling technology in solar cells, thanks to a new discovery in nanoscience. 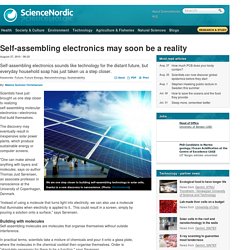 (Photo: Shutterstock) Scientists have just brought us one step closer to realizing self-assembling molecular electronics—electronics that build themselves. The discovery may eventually result in inexpensive solar power plants, which produce sustainable energy or computer screens. Throwable sound-emitting device to draw fish to your line. Rightly or wrongly, technology has made the sport of fishing less of a guessing game and more like shooting the proverbial gill-bearing creatures in a barrel. 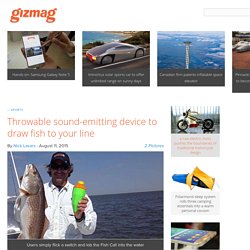 Smartphone-connected fish finders and even waterproof drones that will land your lure in their midst are a couple of recent examples, and now a new device is designed to make things even easier. The Fish Call works by mimicking the sounds of feeding fish and is claimed to draw in species of all kinds. Canadian firm patents inflatable space elevator.

In space travel, the first step is always the most expensive, but why blast-off in a rocket if you can catch a ride on a space elevator? 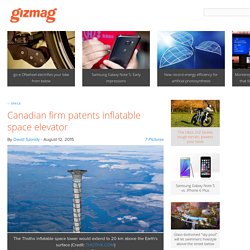 Canadian space firm Thoth Technology has received a US patent for an elevator to take spacecraft and astronauts at least part way into space. If it's ever built, the 20 km (12.4 mi) high Thothx inflatable space tower holds the promise of reducing launch costs by 30 percent in terms of fuel, and may even replace some classes of satellites. Space travel is a field that is rich in paradoxes. Even though the cosmos stretches out tens of billions of light years away from us, it's covering the first 100 km (62 mi) that mark the official boundary of space that presents the most difficult and expensive challenge for current technology. Memories can survive cryogenic preservation, study shows.

Research claims worms retain memories after undergoing cryonic processNematodes were taught to react to the smell of benzaldehyde before being frozen for 30 minutes and then their memories of the smell were testedSome scientists have expressed concern that the cryogenic process can damage the delicate neural structures in the brain, wiping memories By Richard Gray for MailOnline Published: 17:16 GMT, 2 June 2015 | Updated: 02:01 GMT, 3 June 2015. 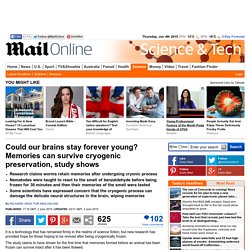 Animals Bow to Their Mechanical Overlords - Issue 10: Mergers & Acquisitions. Several years ago, a group of American cockroaches discovered four strangers in their midst. 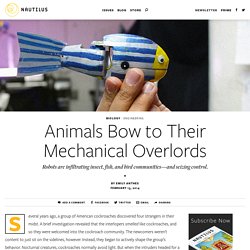 A brief investigation revealed that the interlopers smelled like cockroaches, and so they were welcomed into the cockroach community. The newcomers weren’t content to just sit on the sidelines, however. Instead, they began to actively shape the group’s behavior. Invisibility cloak built with common materials can hide macroscopic objects. A new invisibility cloak developed at the Karlsruhe Institute of Technology (KIT) is reportedly able to hide any object that can fit inside a one-inch diameter cylinder. 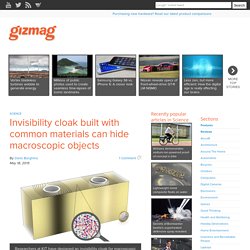 The cloaking device is among the first to rely on common materials like polymers and acrylic paint, and could be used for a practical demonstration of cloaking technology. Although building a practical invisibility cloak is proving an extremely challenging feat, the principle behind it is quite simple: to make an object invisible, scientists must find a way to let in light rays through one side of the cloak, smoothly guide them around the object to be hidden, and then restore their original direction to show no sign that they were diverted in the first place. NASA Ames reproduces the building blocks of life in laboratory. NASA scientists studying the origin of life have reproduced uracil, cytosine, and thymine, three key components of our hereditary material, in the laboratory. They discovered that an ice sample containing pyrimidine exposed to ultraviolet radiation under space-like conditions produces these essential ingredients of life. Pyrimidine is a ring-shaped molecule made up of carbon and nitrogen and is the central structure for uracil, cytosine, and thymine, which are all three part of a genetic code found in ribonucleic (RNA) and deoxyribonucleic acids (DNA).

RNA and DNA are central to protein synthesis, but also have many other roles. "We have demonstrated for the first time that we can make uracil, cytosine, and thymine, all three components of RNA and DNA, non-biologically in a laboratory under conditions found in space," said Michel Nuevo, research scientist at NASA's Ames Research Center, Moffett Field, California. Scientists capture first ever image of light acting as a particle and a wave. Science for the People! CC-BY: BSSRS/Wellcome Images There’s a smell in Battersea, south-west London. Today, there are streams of the internet devoted to a whiff of toast commuters notice on the train over the river. Artificial Enzymes from Artificial DNA Challenge Life As We Know It. Artificial Enzymes from Artificial DNA Challenge Life As We Know It In the decade or so since the Human Genome Project was completed, synthetic biology has grown rapidly. Impressive advances include the first bacteria to use a chemically-synthesized genome and creation of a synthetic yeast chromosome.

Recently, scientists from the MRC Laboratory of Molecular Biology in Cambridge, led by Dr. Philip Hollinger, reported creating the first completely artificial enzymes that are functional. Forensic Reconstruction Shows What A Skull-Shaped Vodka Bottle Looks Like With A Face. Tractor beam generates waves that bring back floating objects. You would normally expect objects that float in water to move in the same direction as waves. But now we can force floating objects to move in the opposite direction. This unexpected effect nicknamed a “water surface tractor beam” is reported in a Nature Physics paper by a group of scientists, including myself, at the Australian National University.

Tiny force measurement could have big implications. Researchers with the Lawrence Berkeley National Laboratory and the University of California Berkeley have measured what is believed to be the smallest force yet recorded – 42 yoctonewtons, or a septillionth of a newton. Measuring force at such incomprehensibly tiny levels is important to furthering our understanding of how gravity works at the quantum scale. The smaller the force, the more likely researchers are to run into the Heisenberg uncertainty principle, where the act observation effects the precision of the result observed through what's called "quantum back-action.

" PARS tech turns bodies transparent. Ordinarily, when scientists want to see specific cells within a piece of biological tissue, they first have to remove that tissue from the body, slice it very thin, then examine those two-dimensional slices using a microscope. Scientists turn table salt into forbidden compounds that violate textbook rules. A real-life Jurassic Park? Birds could be theoretically 'de-evolved' back to dinosaurs. Blizzident "toothbrush" is claimed to clean your teeth in 6 seconds. Seeing light in a new light: Scientists create never-before-seen form of matter. Harvard and MIT scientists are challenging the conventional wisdom about light, and they didn't need to go to a galaxy far, far away to do it. Working with colleagues at the Harvard-MIT Center for Ultracold Atoms, a group led by Harvard Professor of Physics Mikhail Lukin and MIT Professor of Physics Vladan Vuletic have managed to coax photons into binding together to form molecules -- a state of matter that, until recently, had been purely theoretical.

The work is described in a September 25 paper in Nature. The discovery, Lukin said, runs contrary to decades of accepted wisdom about the nature of light. Mico Headphones By Neurowear Read Minds And Choose Music Based On Mood. Nebula 12 concept generates indoor clouds based on meteorological data. The Nebula 12 concept produces indoor clouds based on the current weather forecast data obtained via a Wi-Fi connected Lumia smartphone Image Gallery (5 images) Can Controversial Ocean Iron Fertilization Save Salmon?