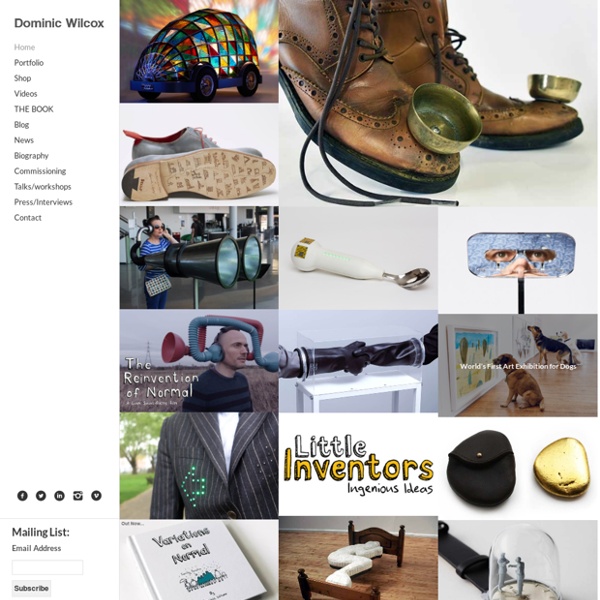 scarcity of hunger - wei Scarcity of hunger Feed me next meal Scarcity project with Het Nieuwe Instituut, Rotterdam, 2013-2014 - In this fast-paced society, we take it for granted that hungry feeling can be solved immediately. Get making with cardboard artist Lottie Smith! : Little Inventors Take inspiration from Little Inventors Magnificent Maker and cardboard artist Lottie Smith as she shows you how to work with cardboard and recyclable materials. Do try this at home, take care with scissors and get some adult help! In this series of 12 short videos, we’re going to show you some great hints and tips about making your own invention models. Download our Get Making pack on our resource page for all the info you might need! There are also six tutorials too to help you with your project - happy making!

Olaf Stapledon William Olaf Stapledon (10 May 1886 – 6 September 1950) – known as Olaf Stapledon – was a British philosopher and author of influential works of science fiction.[1][2] In 2014, he was inducted into the Science Fiction and Fantasy Hall of Fame. Life[edit] During the First World War he served as a conscientious objector.[2] Stapledon became an ambulance driver with the Friends' Ambulance Unit in France and Belgium from July 1915 to January 1919; he was awarded the Croix de Guerre for bravery.[5] On 16 July 1919 he married Agnes Zena Miller (1894–1984), an Australian cousin.[2] They had first met in 1903, and later maintained a correspondence throughout the war. They had a daughter, Mary Sydney Stapledon (1920–2008), and a son, John David Stapledon (1923–2014). In 1920 they moved to West Kirby. On Stapledon's religious views, he was an agnostic.[8]

Whittle School and Studios Learning occurs beyond the four walls of a classroom—everything in a school is a lesson, and the campus should reflect that. If there is a school on the planet that has received as much design attention as Whittle School & Studios, we don’t know of it. When our first campuses open in 2019—in Shenzhen, China and Washington, DC—more than five years of effort will have been invested in their creation. Designed by renowned architect Renzo Piano, our campuses are inspiring environments for making, sharing, and growing—places where students can pursue their passions and achieve their highest potential. Our prototype comprises approximately 600,000 square feet: 400,000 for academic purposes and 200,000 for residential space.

Dominic Wilcox portfolio page Kellogg’s challenged artist and designer Dominic Wilcox to make breakfast time more fun and interesting for families and children going back to school. The morning can be a stressful time for parents getting the kids ready and so any help to make it a stress free and enjoyable time is welcome. Inventions include:Soggy-o-Meter Everyone who eats cereal has their own particular sogginess preference. This device allows you to set a timer precisely to your preferred cereal sogginess. Simply select one of 5 cereals and turn the dial to select your required sogginess, from ‘not soggy’ right up to ‘soggylicious’.

Institute of Critical Zoologists "The work to follow is an exploration of these complexities and reminds us that birds occupy a large and central part of that universe that human beings constantly carve out of nature." Ding Li “In contemporary society birds are, perhaps, both the most watched and most eaten animal on our planet. They have become a focal point of debates about a 'proper' relationship between humankind and nature, and about definitions of humanity itself.” Creativity Is The Skill Of The Future When we look at the world we live in today, it is easy to see how the technological advances have completely redefined the way we live and communicate. With the influx of social media apps, we are now able to talk to virtually any person on any corner of the earth. Instagram, as an example, has allowed users to see live video streams of their friends in faraway places, as well as get a glimpse of the lifestyle of their favorite celebrities. Through social media have become more connected. Knowledge is also easier to find, in fact, we can find anything about any topic on YouTube or Google.

Dominic Wilcox serves breakfast by drone for Kellogg's British inventor Dominic Wilcox has designed a series of playfully absurd breakfast accessories for Kellogg's to encourage children to eat in the mornings (+ movie). Wilcox's Re-imagining Breakfast inventions for American food manufacturer Kellogg's include a tummy-rumble amplifier and a breakfast-serving drone. The set of seven items also features a soggy-o-meter, an energy-detecting spoon, a wireless talking pillow, a head-mounted crane that serves cereal, and a Snap, Crackle and Pop speaker. Intended to catch out anyone that has skipped breakfast, the Hungry Tummy Rumbler has a built-in microphone that attaches to children's waists and connects to a giant amplifying orange brass horn. "My first sketch was just a little person with some huge horns attached," Wilcox told Dezeen. "With my drawings I'm trying to explain the idea in the simplest and most direct way possible.

Jaemin Paik When We All Live To 150 2012, Jun 1 year Research Project, Mixed media Instructional Design In today’s online educational environment, it is more important than ever to create genuinely interactive online educational experiences, above and beyond the out-of-the-box, cookie-cutter interactivity provided by most educational content development tools and learning management systems such as simple quizzing functionality and flashcards, which I often refer to as “baby interactivity.” So if most out-of-the-box… Read More Nineteenth-century British moral philosopher John Stuart Mill famously said, “It is better to be a human being dissatisfied than a pig satisfied; better to be Socrates dissatisfied than a fool satisfied.” — John Stuart Mill As instructional designers, we are often tasked with creating “satisfying” educational and learning experiences. We take for granted that education… Read More

After Dark Play Video Over five nights in August 2014, the public logged-on to the After Dark web app to take a space-age tour through 500 years of British art. Equipped with cameras, the robots’ journeys were watched by thousands of people world-wide via the internet, alone in their adventure except for their robotic co-explorers. A few lucky people, chosen at random, were given the opportunity to actually control a robot themselves, navigating their own journey round Tate Britain’s historic building and collection.