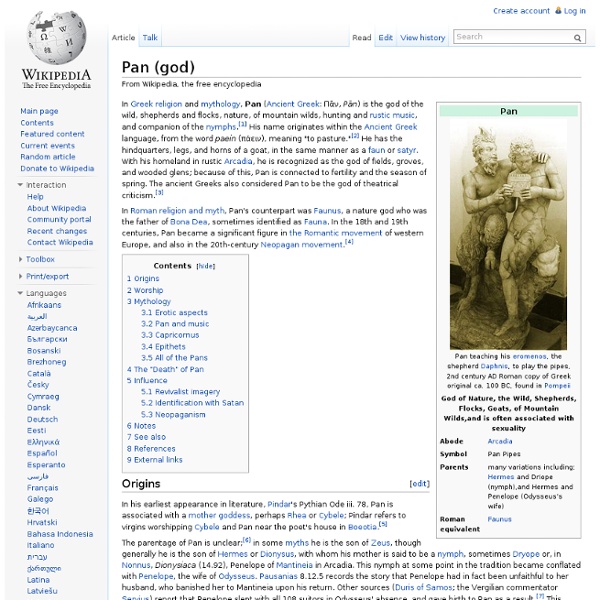 In Greek religion and mythology, Pan (/ˈpæn/;[1] Ancient Greek: Πᾶν, Pān) is the god of the wild, shepherds and flocks, nature of mountain wilds, hunting and rustic music, and companion of the nymphs.[2] His name originates within the Ancient Greek language, from the word paein (πάειν), meaning "to pasture."[3] He has the hindquarters, legs, and horns of a goat, in the same manner as a faun or satyr. With his homeland in rustic Arcadia, he is recognized as the god of fields, groves, and wooded glens; because of this, Pan is connected to fertility and the season of spring. The ancient Greeks also considered Pan to be the god of theatrical criticism.[4] The Roman Faunus, a god of Indo-European origin, was equated with Pan. The worship of Pan began in Arcadia which was always the principal seat of his worship. Representations of Pan on 4th century BC gold and silver Pantikapaion coins Pan is famous for his sexual powers, and is often depicted with a phallus. Christian apologists such as G.

Poseidon There is a Homeric hymn to Poseidon, who was the protector of many Hellenic cities, although he lost the contest for Athens to Athena. According to the references from Plato in his dialogue Timaeus and Critias, the island of Atlantis was the chosen domain of Poseidon.[4][5][6][7] Etymology The earliest attested occurrence of the name, written in Linear B, is 𐀡𐀮𐀆𐀃 Po-se-da-o or 𐀡𐀮𐀆𐀺𐀚 Po-se-da-wo-ne, which correspond to Poseidaōn and Poseidawonos in Mycenean Greek; in Homeric Greek it appears as Ποσειδάων (Poseidaōn); in Aeolic as Ποτειδάων (Poteidaōn); and in Doric as Ποτειδάν (Poteidan), Ποτειδάων (Poteidaōn), and Ποτειδᾶς (Poteidas).[8] A common epithet of Poseidon is Γαιήοχος Gaiēochos, "Earth-shaker," an epithet which is also identified in Linear B tablets. Another attested word 𐀁𐀚𐀯𐀅𐀃𐀚, E-ne-si-da-o-ne,[9][10] recalls his later epithets Ennosidas and Ennosigaios indicating the chthonic nature of Poseidon.[11] The origins of the name "Poseidon" are unclear. Birth

Gehenna Valley of Hinnom, c. 1900 Valley of Hinnom redirects here In the Hebrew Bible, the site was initially where apostate Israelites and followers of various Ba'als and Caananite gods, including Moloch, sacrificed their children by fire (2 Chr. 28:3, 33:6). In Jewish, Christian and Islamic scripture, Gehenna is a destination of the wicked.[2] This is different from the more neutral Sheol/Hades, the abode of the dead, though the King James version of the Bible translates both with the Anglo-Saxon word Hell. Etymology[edit] English "Gehenna" represents the Greek Ge'enna (γέεννα) found in the New Testament, a phonetic transcription of Aramaic Gēhannā (ܓܗܢܐ)[citation needed], equivalent to the Hebrew Ge Hinnom, literally "Valley of Hinnom". This was known in the Old Testament as Gai Ben-Hinnom,[3] literally the "Valley of the son of Hinnom", [4] and in the Talmud as גהנם Gehinnam or גהנום Gehinnom. This valley, as Keil and Delitzsch note, is "on the south side of the Jebusite town, i.e., Jerusalem."

Ages of Man The Ages of Man are the stages of human existence on the Earth according to Greek mythology. Both Hesiod and Ovid offered accounts of the successive ages of humanity, which tend to progress from an original, long-gone age in which humans enjoyed a nearly divine existence to the current age of the writer, in which humans are beset by innumerable pains and evils. In the two accounts that survive from ancient Greece and Rome, this degradation of the human condition over time is indicated symbolically with metals of successively decreasing value.[citation needed] Hesiod's Five Ages[edit] Lucas Cranach the Elder, The Silver Age The first extant account of the successive ages of humanity comes from the Greek poet Hesiod's Works and Days (lines 109–201). Ovid's Four Ages[edit] The Roman poet Ovid (1st century BC – 1st century AD) tells a similar myth of Four Ages in Book 1.89–150 of the Metamorphoses. Ovid emphasizes the justice and peace that defined the Golden Age. Historicity of the Ages[edit]

Mount Parnassus Mount Parnassus (/pɑrˈnæsəs/; Greek: Παρνασσός, Parnassos), is a mountain of limestone in central Greece that towers above Delphi, north of the Gulf of Corinth, and offers scenic views of the surrounding olive groves and countryside. According to Greek mythology, this mountain was sacred to Apollo and the Corycian nymphs, and the home of the Muses. The mountain was also favored by the Dorians. There is a theory that Parna- derived from the same root as the word in Luwian meaning House. Mythology[edit] Orpheus, life and events in Parnassus. Parnassus was also the site of several unrelated minor events in Greek mythology. Parnassus was also the home of Pegasus, the winged horse of Bellerophon. [edit] Mount Parnassus. Parnassus today[edit] Today, the slopes of Mount Parnassus are the location of two ski centres. The construction of the ski resort started in 1975 and was completed in 1976, when the first two drag lifts operated in Fterolaka. References[edit] External links[edit]

Typhon Typhon was described in pseudo-Apollodorus, Bibliotheke, as the largest and most fearsome of all creatures. His human upper half reached as high as the stars, and his hands reached east and west. Instead of a human head, a hundred dragon heads erupted from his neck and shoulders (some, however, depict him as having a human head, with the dragon heads replacing the fingers on his hands). His bottom half consisted of gigantic viper coils that could reach the top of his head when stretched out and constantly made a hissing noise. His whole body was covered in wings, and fire flashed from his eyes, striking fear even into the Olympians. Accounts[edit] Hesiod narrates Typhon's birth in this poem: mother Earth bore her youngest child Typhoeus of the love of Tartarus, by the aid of golden Aphrodite. —Hesiod, Theogony 820–822. Offspring[edit] Battle with Zeus[edit] Typhon started destroying cities and hurling mountains in a fit of rage. Origin of name[edit] Related concepts and myths[edit] Notes[edit]

Hecate Ancient Greek goddess of magic and crossroads Hecate was one of the main deities worshiped in Athenian households as a protective goddess and one who bestowed prosperity and daily blessings on the family.[5] In the post-Christian writings of the Chaldean Oracles (2nd–3rd century CE) she was regarded with (some) rulership over earth, sea, and sky, as well as a more universal role as Savior (Soteira), Mother of Angels and the Cosmic World Soul.[6][7] Regarding the nature of her cult, it has been remarked, "she is more at home on the fringes than in the center of Greek polytheism. Intrinsically ambivalent and polymorphous, she straddles conventional boundaries and eludes definition."[8] Name and origin[edit] The origin of the name Hecate (Ἑκάτη, Hekátē) and the original country of her worship are both unknown, though several theories have been proposed. Greek origin[edit] R. Egyptian origin[edit] Anatolian origin[edit] Later development[edit] Iconography[edit] Sacred animals[edit] Functions[edit]

Arcas In popular culture[edit] References[edit] External links[edit] Why is It Called Arcas? Irish Soma Many scholars believe that the Indo-Europeans used an entheogenic or psychedelic drug in their rituals -- called soma amongst the Vedic people of India, and haoma in Iran. The ancient Greeks also used an ergot-based preparation in wine as the entheogenic trigger of the Eleusinian Mysteries. Soma has been identified as amanita muscaria or the fly agaric mushroom; haoma may have been the same, or it might be "wild rue," a harmaline-containing shrub (see Bibliography under Flattery and Schwartz). If there's any truth to these theories, we would expect to find that other Indo-European peoples also used such drugs shamanically or ritually. Terrence McKenna believes that psilocybe was once even more widely distributed than it is now, and therefore must also be considered in the soma context. Certainly entheogenic religions are far more thoroughly attested today than when Wasson launched ethnomycology with his "wild" speculations, which now seem rather conservative. St.

Baphomet "Bahomet" redirects here. It is not to be confused with Bahamut. The 19th century image of a Sabbatic Goat, created by Eliphas Levi. The arms bear the Latin words SOLVE (separate) and COAGULA (join together), i.e., the power of "binding and loosing" usurped from God and, according to Catholic tradition, from the ecclesiastical hierarchy acting as God's representative on Earth. The original goat pentagram first appeared in the book "La Clef de la Magie Noire" by French occultist Stanislas de Guaita, in 1897. Baphomet (/ˈbæfɵmɛt/; from Medieval Latin Baphometh, Baffometi, Occitan Bafometz) is a term originally used to describe an idol or other deity that the Knights Templar were accused of worshiping, and that subsequently was incorporated into disparate occult and mystical traditions. §History[edit] The name Baphomet appeared in July 1098 in a letter by the crusader Anselm of Ribemont: Two Templars burned at the stake, from a French 15th-century manuscript §Alternative etymologies[edit]