Tan Le: A headset that reads your brainwaves 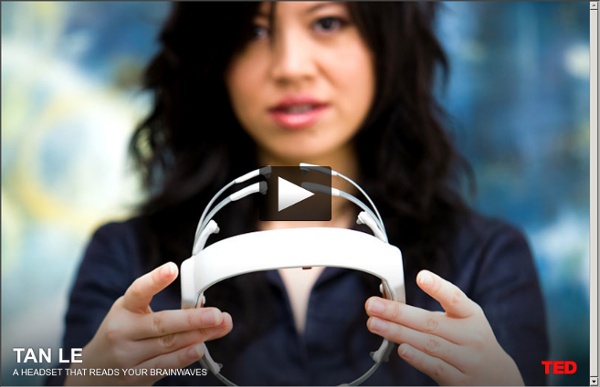 20 Tape Rolls That'll Have You Rolling On The Floor Laughing 24 Tape Rolls That’ll Have You Rolling On The Floor Laughing Packing is not the most tedious task in the world. With unlimited creativity, companies and designers around the world have come up with unusual packing tape ideas that guarantee to give you a lot of fun when you have to move your stuff, either alone or with friends. 24 packing tapes we are about to introduce to you are the coolest of all, ranging from geeky Space Invader tape to patriotic Russian anthem tape. Stop Competing to Be the Best - Joan Magretta by Joan Magretta | 12:09 PM November 30, 2011 With Cyber Monday, the tablet wars kicked into full swing. Which one is the best? Is it the iPad? The Kindle?

Why not make interfaces better than 3D reality? Many constrained interfaces are designed to be simpler than the real world by restricting movement, limiting interface actions, and keeping interface objects in a plane. However, the strong utility of pure 3D interfaces for medical, architectural, product design, and scientific visualization means that interface design for pure 3D remains an important challenge. An intriguing possibility is that enhanced 3D interfaces might offer simpler navigation, more compelling functionality, safer movements, and less occlusion, than 3D reality, especially for information exploration and visualization tasks. Such features can enable superhuman capabilities such as faster-than-light teleportation, flying through objects, and X-ray vision. Enhanced 3D interfaces might have supernatural tools such as magic wands for instantly shrinking, enlarging, duplicating, or sending objects and enchanted environments that provide error prevention, history keeping, and programming-by-demonstration.

Document Extractor - Combi Monitor, Screen & Printer by Byeong Min Choe Print That Screen, Literally! Document Extractor – Combi Monitor is a screen that doubles up as a printer as well. Why? Because you need precious space on your desk to put other stuff! You need to have cool tech devices that put stacks of printer paper hidden away from view! You need to boast of uber cool monitors just cause you don’t own a 27” iMac! First, Let's Fire All the Managers Management is the least efficient activity in your organization. Think of the countless hours that team leaders, department heads, and vice presidents devote to supervising the work of others. Most managers are hardworking; the problem doesn’t lie with them. The inefficiency stems from a top-heavy management model that is both cumbersome and costly. A hierarchy of managers exacts a hefty tax on any organization. This levy comes in several forms.

10 Sci-Fi Technologies That Now Exist While we still don't have that sweet hoverboard from "Back to the Future," we really can't blame scientists for not trying. In the past couple of months, there have been so many awesome technological innovations that we're certain we'll soon be flying to work in an Iron Man suit . As you're reading this article, hundreds of scientists around the world are furiously working on ways to make you a Marvel superhero. Here are just some of the cool, and slightly terrifying, ways their inventions will soon change your life. 1. "Beam Me Up, Scotty" Teleportation is such an old desire of mankind that we can find mentions of it as far back as the New Testament.

Smart Fridge by Ashley Legg Smart Fridge Is Your New Recipe Card The Smart Fridge here is for those who have shunted cooking to a hobby and rely more on designer microwave meals. The idea is to give you a fridge that is intelligent enough to come up with a healthy recipe, depending on what you stock in it. Not only that, it guides you with vocal instructions, spoon by spoon, till you dish out the perfect-wholesome meal. A touch interface door glams up the appliance, creating the desire to own a piece that’s futuristic but may not be what you’re looking for! Designer: Ashley Legg

CES 2012: Who Were the Biggest Winners? [STATS] What topics, trends and websites dominated the conversation last week at CES 2012? Tablet devices and ultrabook laptops were the hottest technologies in Las Vegas. Microsoft rode an early high as Twitter's most-mentioned brand but tailed off later in the week. Motorola, meanwhile, started slow but finished strong. Scientists Create Functioning Whole Organ From Cells For the first time, researchers have been able to develop a functional thymus by using reprogrammed lab-created cells. The research was led by Clare Blackburn MRC Centre for Regenerative Medicine at the University of Edinburgh and the paper was published in the journal Nature Cell Biology. The thymus is the organ responsible for the maturation of T cells, which are essential to a functional immune system.

Water Shade by Yitu Wang This project is completely apolitical. It IS literally a gate of water. This project goes by the name of “Water Shade” and keeps a shield of H2O around the fruit it is sworn to protect. It’s both a dish and a cover, working with water to keep freshness in and everything larger than Oxygen OUT! Designer Yitu Wang doesn’t want to keep you from your delicious apples though, so there’s a built in detector that sees your hand in approach, and thus is does desist. Moisture is locked in. Maker's Schedule, Manager's Schedule July 2009 One reason programmers dislike meetings so much is that they're on a different type of schedule from other people. Meetings cost them more. There are two types of schedule, which I'll call the manager's schedule and the maker's schedule. The manager's schedule is for bosses. It's embodied in the traditional appointment book, with each day cut into one hour intervals.

CES 2012 by numbers As the last rolls of the dice hit the craps tables over in Las Vegas and the casinos, bars and, let's face it, strip clubs see the final departures of men sporting Android t-shirts, it's time for a quick CES 2012 round-up. It's been a hell of a week with an absolute barrage of new tech being thrown at us from all angles. Now, all that remains to do is to sit back and soak up the stats and reflect on what has gone before us. "The 2012 CES was the most phenomenal show in our history, generating more energy and excitement across every major industry touching technology than ever before," said Gary Shapiro, president and CEO of CEA, owner and producer of the International CES. "The breadth and depth of the 2012 CES, which featured more innovative technology products than anywhere else on Earth, is a testament to the dynamic and innovative global consumer technology industry, which will reach $1 trillion globally this year." Indeed it is Gary, indeed it is.

Knitting Needle Sizing Conventions How to make sense of Knitting Needle sizes on international and vintage patterns. One of the exciting aspects about looking at knitting patterns on the Internet is that there is access to a massive wide range of different patterns and designs. Not only are these designs and patterns written by designers from around the world, but also there are patterns available on the Internet which were written many years ago, giving a wealth of choice for todayâ€™s knitter. However, as different countries adopt different knitting needle-size descriptions (and countries such as the UK have moved to a metric system) sometimes it can be unclear which needle sizing definitions the instructions are referring to. For instance a vintage knitting pattern might have been written in the UK and therefore uses the old British needle sizes, but this might not be clear from a first glance at the pattern.

One might use Tan Le's headset as an ongoing from of Christopher deCharms' [Christopher deCharms looks inside the brain | TED] realtime brainintrospection to exercise the brain. Or does the 'crudeness' of the headset's signals compared to those of fMRI and EEG make such a use impossible? by kaspervandenberg Jan 12

Tan Le talks about an EEG headset as an input device. Compared to hospital EEGs the headset is easier to wear, cheaper, and also less accurate. Perhaps this device can help some people with impairments. Tan Le demonstrates a man controlling a wheelchair. However some neurological afflictions might aversely affect the headset. How many different 'toughts' can this head set distinguish? Perhaps headset would work great in combination with dasher etc. by kaspervandenberg Jan 12