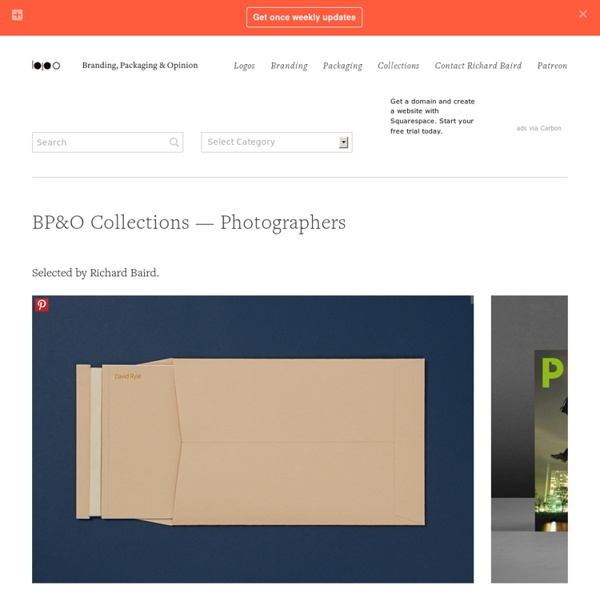 Golden Bee Global Biennale Of Graphic Design 2016 Organised by the Golden Bee Fund and endorsed by Alliance Graphigue Internationale, International Biennales Coordinating Committee and International Council of Design, the Golden Bee Global Biennale of Graphic Design has opened its call for entries for posters and projects created in 2014-2016. There are eight categories: • Posters • Digital Design • Handmade Design • Pioneers Of Russian Design • Chernobyl, Fukushima • Crime And Punishment • Inferno, Purgatory, Paradise • Mercy There is also the additional category 'All Gold Of The World 2014-2016. Golden Bee Special Project' for posters that won awards in 2012-2014 at the most important international competitions. Works in all categories (except for special cases) should be first submitted as digital files.

Logos from why not associates why not associates is a British graphic design company, established two decades ago. Here’s a taste of their identity design work. London Arts logo Corporate identity for arts funding organisation. The Reel logo 20 Awesome Free Brush Fonts Resources April 19, 2013 Nothing can surpass the artistic quality of hand made works. Every stroke made by one’s hand using instruments such as a brush creates a different artistic style with natural look and feel. Oftentimes seen on movie titles, postcard designs and posters, this kind of natural element is achieved when a hand drawn type is used on a particular design. Fortunately, many creative folks out there have transformed the magical brush strokes we often see on paper into awesome font styles anyone can enjoy. We have compiled some of them to help you out in your next creative project.

Reviewed Archives UnderConsideration is a graphic design firm generating its own projects, initiatives, and content while taking on limited client work. Run by Bryony Gomez-Palacio and Armin Vit in Austin, TX. More… Introduction to Neuroeconomics: How the Brain Makes Decisions - Higher School of Economics Economics, psychology, and neuroscience are converging today into a unified discipline of Neuroeconomics with the ultimate aim of creating a single, general theory of human decision-making. Neuroeconomics provides biologists, economists, psychologists and social scientists with a deeper understanding of how they make their own decisions and how others decide. Neuroscience, when allied with psychology and economics, creates powerful new models to explain why we make decisions. Neurobiological mechanisms of decision-making, decisions under risk, trust and cooperation will be central issues in this course.

Vintage logos I saw this a couple of years back on ISO50 but never got around to featuring it. Too good not to share. View the full set on Flickr. Illustrations » Design You Trust – Design Blog and Community Set of amazing comic illustrations by a 29-year-old artist from Australia – Patrick Brown. Continue reading “Comic Illustrations by Patrick Brown” » Set of asian female portrait illustrations by Wataboku, an artist from Japan. Continue reading “Female Portraits by Wataboku” » Brand identity style guides from around the world This is great! The University of Connecticut has a nice one designed by Peter Good. Web and link to PDF version. TetraBox Light by Ed Chew & Yanko Design Liquid to Light Designer Ed Chew takes a green step in the right direction with the TetraBox lamp, a light object made from discarded drink packets that would have otherwise ended up in landfills already packed to the brim. The design is achieved by unfolding the packets and refolding them into hexagonal and pentagonal sections that are then pieced together to form a geodesic sphere or any other desired shape. Here, the Epcot-like ball makes an attractive overhead light and casts an impressive web of shadows and shapes on the surrounding space. Designer: Ed Chew

Responsive Logos From what I’ve seen, logos typically receive the short end of the stick when it comes to responsive web design practices. Take a look through responsive galleries, and you’ll see that, in most examples, the logo is just shrunk to fit within available space. For rectangular logos with simple and minimal details, this approach can work just fine. But if the composition or proportion of a logo is anything else, simply reducing its size for small screens may make small details unrecognizable, and small type unreadable. Fortunately, it doesn’t have to be this way. Style guides and branding guidelines Reflecting On The End Of The Ebola Epidemic, A Doctor Worries That We're Missing The Point : Goats and Soda When a country is declared Ebola-free — like Sierra Leone last November — the mood is upbeat. But that doesn't mean the virus is vanquished. This month, a young woman there developed Ebola and died. Aurelie Marrier d'Unienvil/AP hide caption