Giant Plasma Guns Could Be the Answer to Limitless Fusion Power. Generating endless energy with zero emissions by just slamming hydrogen atoms together has been somewhat of a pipe dream for decades. 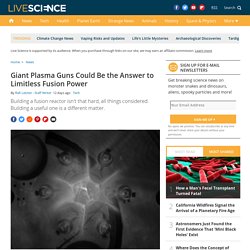 Now, scientists may be getting a tiny step closer to feasible fusion power, thanks to a futuristic experiment and dozens of plasma guns. Eighteen of 36 plasma guns are in place on the machine that could make fusion power a reality. Those guns are the key components of Los Alamos National Laboratory's Plasma Liner Experiment (PLX), which uses a new approach to the problem. PLX, if it works, will combine two existing methods of slamming single-proton hydrogen atoms together to form two-proton helium atoms. Google Confirms Achieving Quantum Supremacy. Quantum Supremacy Using a Programmable Superconducting Processor. Posted by John Martinis, Chief Scientist Quantum Hardware and Sergio Boixo, Chief Scientist Quantum Computing Theory, Google AI Quantum Physicists have been talking about the power of quantum computing for over 30 years, but the questions have always been: will it ever do something useful and is it worth investing in? 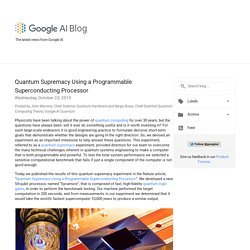 For such large-scale endeavors it is good engineering practice to formulate decisive short-term goals that demonstrate whether the designs are going in the right direction. So, we devised an experiment as an important milestone to help answer these questions. This experiment, referred to as a quantum supremacy experiment, provided direction for our team to overcome the many technical challenges inherent in quantum systems engineering to make a computer that is both programmable and powerful.

To test the total system performance we selected a sensitive computational benchmark that fails if just a single component of the computer is not good enough. Choice page. Replacing Coal with Gas or Renewables Saves Billions of Gallons of Water. Note to editors: Avner Vengosh is available for additional comments at (919) 681-8050 or vengosh@duke. 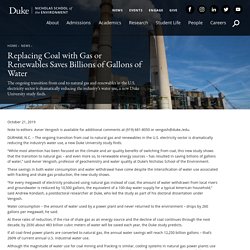 /edu. DURHAM, N.C. – The ongoing transition from coal to natural gas and renewables in the U.S. electricity sector is dramatically reducing the industry’s water use, a new Duke University study finds. “While most attention has been focused on the climate and air quality benefits of switching from coal, this new study shows that the transition to natural gas – and even more so, to renewable energy sources – has resulted in saving billions of gallons of water,” said Avner Vengosh, professor of geochemistry and water quality at Duke’s Nicholas School of the Environment.

World record acceleration: Zero to 7.8 billion electron volts in 8 inches. To understand the fundamental nature of our universe, scientists would like to build particle colliders that accelerate electrons and their antimatter counterparts (positrons) to extreme energies (up to tera electron volts, or TeV). 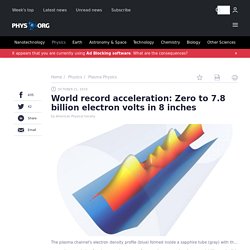 With conventional technology, however, this requires a machine that is enormously big and expensive (think 20 miles (32 km) long). To shrink the size and cost of these machines, the acceleration of the particles—how much energy they gain in a given distance—must be increased. Archaeologist Plans to Map All Land on Earth Using Lasers on Planes Before Climate Change Claims Treasures. Cultural, environmental and geological treasures are already being lost to climate change.Using Lidar, a scientist wants to create a 3D map of all the land on Earth.He also wants to create a repository to share data will all researchers. 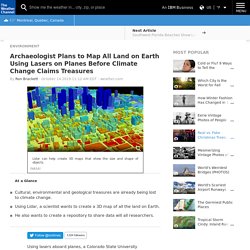 Using lasers aboard planes, a Colorado State University archaeologist wants to scan the entire surface of the Earth and create detailed digital maps of all its treasures. Scientists observe a single quantum vibration under ordinary conditions. When a guitar string is plucked, it vibrates as any vibrating object would, rising and falling like a wave, as the laws of classical physics predict. 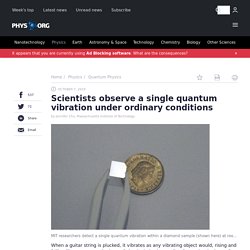 But under the laws of quantum mechanics, which describe the way physics works at the atomic scale, vibrations should behave not only as waves, but also as particles. The same guitar string, when observed at a quantum level, should vibrate as individual units of energy known as phonons. Now scientists at MIT and the Swiss Federal Institute of Technology have for the first time created and observed a single phonon in a common material at room temperature. New metamaterial morphs into new shapes, taking on new properties. A newly developed type of architected metamaterial has the ability to change shape in a tunable fashion. 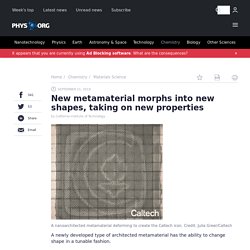 While most reconfigurable materials can toggle between two distinct states, the way a switch toggles on or off, the new material's shape can be finely tuned, adjusting its physical properties as desired. The material, which has potential applications in next-generation energy storage and bio-implantable micro-devices, was developed by a joint Caltech-Georgia Tech-ETH Zurich team in the lab of Julia R. Greer. Greer, the Ruben F. and Donna Mettler Professor of Materials Science, Mechanics and Medical Engineering in Caltech's Division of Engineering and Applied Science, creates materials out of micro- and nanoscale building blocks that are arranged into sophisticated architectures that can be periodic, like a lattice, or non-periodic in a tailor-made fashion, giving them unusual physical properties. The Nature paper is titled "Electrochemically Reconfigurable Architected Materials.

7 Accidental Change-Makers. People who made a mark on our world with their unintentional discoveries turned inventions If it weren’t for accidents, some change-makers wouldn’t have come up with inventions we take for granted. 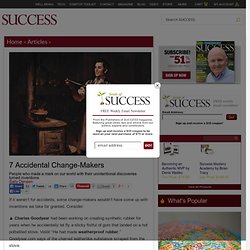 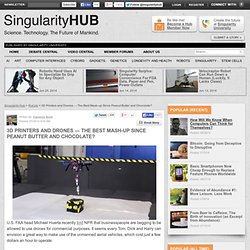 FAA head Michael Huerta recently told NPR that businesspeople are begging to be allowed to use drones for commercial purposes. It seems every Tom, Dick and Harry can envision a great way to make use of the unmanned aerial vehicles, which cost just a few dollars an hour to operate. The only tech product with a longer list of clever uses is the 3D printer — though its price point largely limits its uses to industry and high-tech. 14 Emerging Health Technologies. Worldtruth. A free energy device is one that creates energy in an open system. 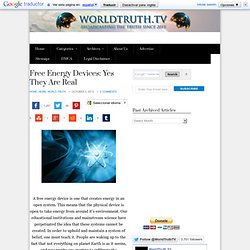 MIT, Harvard scientists accidentally create real-life lightsaber. The force is clearly with them. In a reported first, researchers at Harvard and the Massachusetts Institute of Technology have developed a newfangled technology that theoretically could be used to construct an actual lightsaber. Until now, photons, or the mass-less particles that constitute light, were thought to not interact, but rather simply pass through each other, just two beams of luminescence during a laser-light show. "The physics of what’s happening in these molecules is similar to what we see in the movies.” - Mikhail Lukin, Harvard physics professor. Why Nikola Tesla was the greatest geek who ever lived. 19-Year-Old Develops Cleanup Array To Remove 7,250,000 Tons Of Plastic From Oceans. Another young creative mind working towards bettering our world. 19-year-old Boyan Slat has revealed his plans to the world regarding his Ocean Cleanup Array that could remove 7,250,000 tons of plastic waste from the world’s oceans.

The revolutionary device consists of an anchored network of floating booms and processing platforms that could be dispatched to garbage patches around the world. Instead of moving through the ocean, the array would span the radius of a garbage patch, acting as a giant funnel. The angle of the booms would force plastic in the direction of the platforms, where it would be separated from plankton, filtered and stored for recycling. It all began when Boyan Slat launched a project that analyzed the size and amount of plastic particles in the ocean’s garbage patches. He produced a paper of his findings which went on to win several prizes, including Best Technical Design 2012 at the Delft University of Technology.

Video: Giant Chinese 3D Printer Builds 10 Houses In Just 1 Day. What Oculus’s $2 billion payday teaches us about innovation. Whirlpool CIO: Google's consumer-driven innovation led us to Apps. In another example of the blurred lines between business and personal computing, Whirlpool chose Google Apps because the home appliances giant is convinced Google’s focus on consumers gives it a special innovation edge as a provider of enterprise software. The way Whirlpool sees it, battling in the ferociously competitive and fast-changing consumer Internet market forces Google to innovate at breakneck speed and to stretch its technology vision into the future. “With Google, you get the relentless consumer-based innovation pressure on the products that can then be promoted into the enterprise suite,” Whirlpool CIO Mike Heim told IDG News Service after Google announced his decision last week.