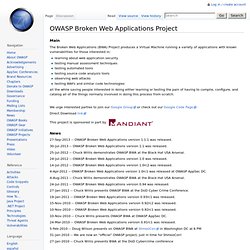 WAppEx is an integrated Web Application security assessment and exploitation platform designed with the whole spectrum of security professionals to web application hobbyists in mind. It suggests a security assessment model which revolves around an extensible exploit database. Further, it complements the power with various tools required to perform all stages of a web application attack. Updates in 2.0 Auto-detect feature deleted from exploits Browser tool deleted Exploits and payloads view changed Exploit Database with the following features added: New script syntax and structure Searching, selecting, and executing of exploits.

Add/remove database entries (exploits or payloads) Add exploits or payloads to the database using either the Exploit Wizard or the script file Batch testing of multiple targets against multiple exploits Execute multiple instances of one or more payloads (for every running exploit) simultaneously. The full list features is as below: Noobz Guide for Setting Up a Vulnerable Lab for Pentesting. Most of the people I know who are new to penetration testing want to hone and enhance their skills, but they have problems like: They don’t have a target that is live and safe to penetrate.They have proposed and known targets but testing these targets is unethical and could put them in jail.They have questions like, “What is the best way to get a virtual machine lab up and running? 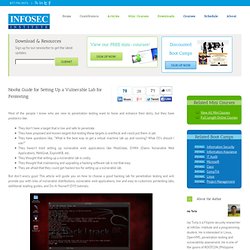 What OS’s should I use?” They haven’t tried setting up vulnerable web applications like Mutillidae, DVWA (Damn Vulnerable Web Application), WebGoat, ExploitKB, etc.They thought that setting up a vulnerable lab is costly.They thought that maintaining and upgrading a hacking software lab is not that easy.They are afraid that they could get hacked too for setting up a vulnerable lab. But don’t worry guys! Want to learn more?? Here are two common virtualization software packages that are free to download and are compatible with Windows, Linux, Mac OSX, Solaris, and FreeBSD: 1. 2. 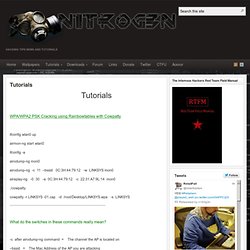 -c after airodump-ng command = The channel the AP is located on –bssid = The Mac Address of the AP you are attacking -0 = Specifies to aireplay-ng that it will be a Deauth Atatck, “thats a zero by the way” -c after aireplay-ng command specifies the client connected to the AP which you are attacking . -r = specifies the capture file you will be cracking using Cowpatty -d = The directory of your RainBow Table you will be using for the attack. basically the location on your hard disk. This tutorial Written fully by n1tr0g3n @ www.n1tr0g3n.com. PIX 501 Firewall Quick Start Guide, Version 6.3   [Cisco PIX Firewall Software.