What is Contemporary Learning?

As a student in an educational doctoral program titled Contemporary Learning and Interdisciplinary Research, the first question you may ask is: what is contemporary learning?

Although simply stated, the answer to this question is multifarious. Contemporary learning is wholly influenced by the the country's position.
Globalization has been a significant motivational impetus for education reform in the US (Ellison, 2012). The reality that our nation's children are competing with children in countries such as India and China has been echoed by many political and economic leaders including former Secretary of Education Arne Duncan (Ellison, 2012). Furthermore, President Obama’s echoed rhetoric that the purpose of education is to secure employment in a global marketplace (Hairston, 2013) drives this point home.
Domestically, the intentionality behind the nationwide Common Core Curriculum Standards (CCCS) were rigorous, academic and other skills that foster student college and career readiness (Pense, Freeburg, and Clemons, 2015). According to the Common Core Standards Initiative website, these standards "promote equity by ensuring all students are well prepared to collaborate and compete with their peers." These standards reflect one major part of recent education reform. Amongst this changing educational landscape, quickly shifting demographics and advances in technology require education to pivot and meet these emerging demands (McNeil, 2013). Thus, there has been a call from educational leaders, policymakers, and employers to develop 21st Century skills seen as necessary for success in the workplace (Hilton, 2015). According to the nonprofit Partnership for 21st Century Learning, skills such as teamwork, creativity, problem-solving, communication, and critical thinking represent a parcel of the knowledge students need.
Given all of this, we now return to the original question: what is contemporary learning? My attempt at a definition takes all of these factors into consideration and encompasses a bit more. Contemporary learning is the implementation of educational and developmental practices that infuse technological, social, economic, and cultural contexts of our evolving world with academic content. Stated simply, contemporary learning is the use of educational and developmental practices that prepare students for the future world they will inherit. One book that discusses contemporary learning in this manner is David Perkins' Future Wise.
Perkins (2014) advocates educating our children for a changing world that teaches content that is applicable to their lives and establish the skills they will need to succeed in an unknown future. Perkins spends the duration of the book exploring what makes learning life worthy, while also calling for teaching that goes beyond basic skills, traditional disciplines, discrete disciplines, regional perspectives, mastering content, and prescribed content (p. 2-3). Perkins desires a reinvigorated approach to teaching that reconsiders how we approach academic subjects; how we encourage curiosity and connection-making; and how we teach applicablility.
Thus, contemporary learning entails considerations of the philosophical, pragmatic, and problematic. Hence, this collection is curated into sections that address each of these to demonstrate what contemporary learning is, how we can become practitioners and researchers, and what concerns we should have - on our quest to be leaders of contemporary learning.

References
Center on Education Policy, (2014). Common Core Standards in 2014:
Districts' perceptions, progress, and challenges. Washington, DC: George Washington University.
Ellison, S. (2012). From within the belly of the beast: Rethinking the concept of ‘the educational marketplace’ in the popular discourse of education reform. Educational Studies, 48(2), 119-136. 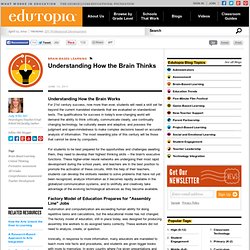 The qualifications for success in today's ever-changing world will demand the ability to think critically, communicate clearly, use continually changing technology, be culturally aware and adaptive, and possess the judgment and open-mindedness to make complex decisions based on accurate analysis of information. What is critical thinking? A definition for real-life. 21st Century Skills Definition. The term 21st century skills refers to a broad set of knowledge, skills, work habits, and character traits that are believed—by educators, school reformers, college professors, employers, and others—to be critically important to success in today’s world, particularly in collegiate programs and contemporary careers and workplaces. 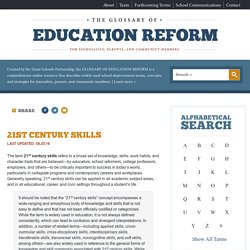 Generally speaking, 21st century skills can be applied in all academic subject areas, and in all educational, career, and civic settings throughout a student’s life. It should be noted that the “21st century skills” concept encompasses a wide-ranging and amorphous body of knowledge and skills that is not easy to define and that has not been officially codified or categorized. 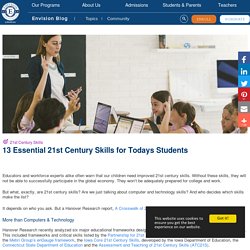 Without these skills, they will not be able to successfully participate in the global economy. They won’t be adequately prepared for college and work. What are 21st century skills? The 21st century skills are a set of abilities that students need to develop in order to succeed in the information age. The Partnership for 21st Century Skills lists three types: 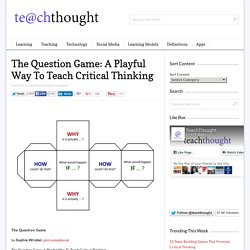 Our school system is structured around rewards for regurgitating the right answer, and not asking smart questions – in fact, it discourages asking questions. In A More Beautiful Question: The Power of Inquiry to Spark Breakthrough Ideas, Warren Berger suggests that there are three main questions which help in problem solving: Why questions, What If questions, and How questions.

Regardless of the question, the question needs to be phrased openly and positively in order to achieve positive results – a closed or negative question only raises bad feelings against each other. Why questions help to find the root of a problemWhat If questions open up the floor for creative solutionsHow questions focus on developing practical solutions. What Teachers Need to Know about Critical Thinking Vs Creative Thinking. December 7, 2014 When it comes to differentiating critical thinking from creative thinking, things get a little bit blurry as there is no consensus as to what really defines these processes. 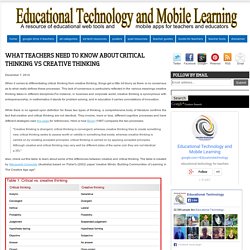 5 Ways to Help Your Students Become Better Questioners. The humble question is an indispensable tool: the spade that helps us dig for truth, or the flashlight that illuminates surrounding darkness. 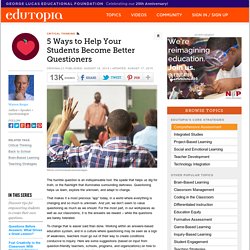 Questioning helps us learn, explore the unknown, and adapt to change. That makes it a most precious “app” today, in a world where everything is changing and so much is unknown. And yet, we don’t seem to value questioning as much as we should. Critical Thinking Pathways. Critical thinking is trendy these days. 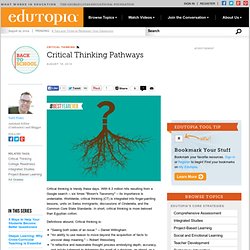 With 6.3 million hits resulting from a Google search -- six times "Bloom's Taxonomy" -- its importance is undeniable. Worldwide, critical thinking (CT) is integrated into finger-painting lessons, units on Swiss immigrants, discussions of Cinderella, and the Common Core State Standards. Critical Thinking Toolbox: How to Brainstorm. Brainstorming is an essential part of critical thinking and a tool that people use to invent an idea, find a solution to a problem, or answer a question. 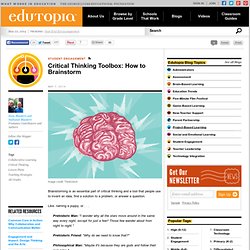 Like: naming a puppy, or . . . Prehistoric Man: "I wonder why all the stars move around in the same way every night, except for just a few? Students Evolve from Consumers to Critics and Creators. Critical-thinking skills -- and fluency in multimedia production -- are integral to media literacy. 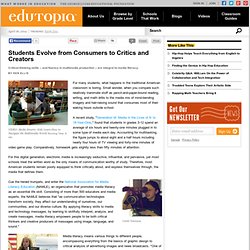 Running Time: 8 min. For many students, what happens in the traditional American classroom is boring. Small wonder, when you compare such relatively inanimate stuff as pencil-and-paper-bound reading, writing, and math drills to the media mix of mind-bending imagery and hair-raising sound that consumes most of their waking hours outside school. A recent study, "Generation M: Media in the Lives of 8- to 18-Year-Olds," found that students in grades 3-12 spend an average of six hours and twenty-one minutes plugged in to some type of media each day. 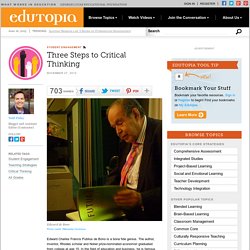 The author, inventor, Rhodes scholar and Nobel prize-nominated economist graduated from college at age 15. In the field of education and business, he is famous for originating the term lateral thinking. In his spare time, he also wrote Six Thinking Hats and several other books on creativity. Of all his contributions to the field of education, there is one critical thinking method that I use in classes more than any other: the PMI, a brainstorming model built on the categories of plus, minus and interesting.

The Power of "I Don't Know" The role of teaching has evolved. No longer are we the carriers of knowledge, giving it to students and assessing if they can repeat facts successfully. We are, instead, tasked with teaching students how to find answers themselves. And it all starts with a simple three-word phrase: I don't know. Adopting a comfortable "I don't know" attitude is far more accurate for what we need to do as educators then pretending we know it all. It sounds counterintuitive, I know. Where the Wonders of Learning Never Cease. What Is Design Thinking?

How might we engage students more deeply in reading? -- Karen, learning specialist How might we create a classroom space that is more centered around the needs and interests of the students? -- Michael, second-grade teacher How might we create a more collaborative culture for teachers at our school? -- Patrick, third-grade teacher. College Readiness: Reading Critically. We have a generation of students that are trained to automatically trust the textbook, or for that matter, trust anything that is written.

Today, many students don't know how to read things with a grain of salt. So how do we go about fixing this? Well, first we have to get them to read, then get them to read critically. Mem Fox's book, Reading Magic, states that the love of reading has to start young. Parents and teachers have to read at least 1000 books to children to prepare them to read on their own. Using Theater to Deconstruct Shame & Fear ESOL Learning. Black Youth Use Vernacular to Create Digital Texts. Segregation & 21st Century Learning.

The Impact of Achievement Gaps on State and National Economies. A number of current research reports address the impact of the achievement gaps on state and national economies. Below you will find important studies that can help educators and policymakers look at the complex issues that surround the achievement gaps. The Economic Impact of the Achievement Gap in America’s SchoolsThis report by McKinsey & Company has been widely acknowledged as providing a “common, neutral fact base” on the gaps that exist between students who are White or Black, rich or poor, and looks at the dramatic difference in student performance in students from similar backgrounds across school systems and classrooms. The report highlights the impact of the gaps on our economy and on individual life outcomes, and the information will be useful in discussions on addressing the achievement gaps.

Cities in Crisis 2009: Closing the Graduation GapThis report was prepared for America's Promise Alliance, one of NEA’s partners in addressing the dropout crisis. Who Are We Leaving Behind: Closing the Achievement Gap. Wisconsin’s black-white achievement gap worst in nation despite decades of efforts. When Madison Memorial High School sophomore Demitrius Kigeya solves math problems in his head, other students give him surprised looks. He believes it is because he is black. “I just pay attention in class and do my homework,” said Kigeya, 15. Abigail Becker / Wisconsin Center for Investigative Journalism Odoi Lassey, a junior at Madison Memorial High School, can count on one hand the number of minority students in his advanced placement classes.

Teaching Kids to Code and the Digital Divide. Reading, writing and arithmetic used to be the three basics of a solid education. But in this age, more kids are learning to code as well. Thousands of kids and teens are being taught coding skills at public schools and private academies across the Bay Area. The Opportunity Gap NOT Segregation. The Challenges of Closing the Digital Divide. GAO study: Segregation worsening in U.S. schools. Racism in Boston’s schools was focus of gathering at Dorchester church.