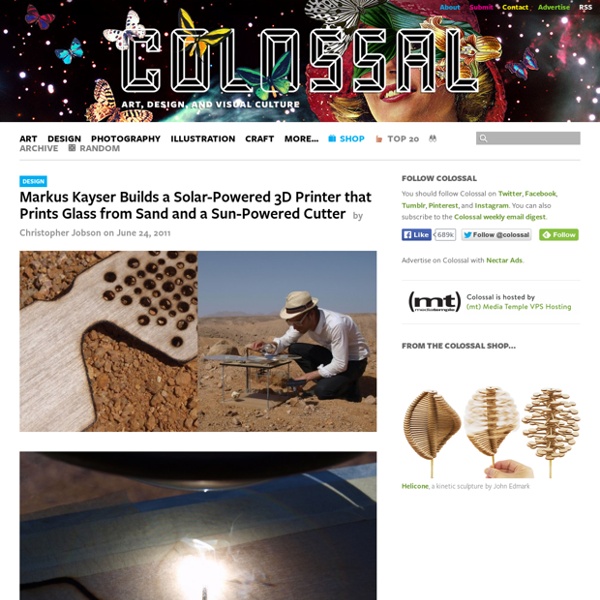 Industrial designer and tinkerer Markus Kayser spent the better part of a year building and experimenting with two fantastic devices that harness the sun’s power in some of the world’s harshest climates. The first he calls a Sun Cutter, a low-tech light cutter that uses a large ball lens to focus the sun’s rays onto a surface that’s moved by a cam-guided system. As the surface moves under the magnified light it cuts 2D components like a laser. The project was tested for the first time in August 2010 in the Egyptian desert and Kayser used thin plywood to create the parts for a few pairs of pretty sweet shades. But he didn’t stop there. Next, Kayser began to examine the process of 3D printing. In mid-May the Solar Sinter was tested for a two week period in the deserts of Siwa, Egypt, resulting in the amazing footage above.

3D-Printed Skull Implant Ready for Operation 3D printing technology has helped replace 75 percent of a patient's skull with the approval of U.S. regulators. The 3D-printed implant can replace the bone in people's skulls damaged by disease or trauma, according to Oxford Performance Materials. The company announced it had received approval from the U.S. Food and Drug Administration for its skull implant on Feb. 18 — a decision that led to the first U.S. surgical operation on March 4. "We see no part of the orthopedic industry being untouched by this," said Scott DeFelice, president of Oxford Performance Materials. DeFelice's company is already selling 3D-printed implants overseas as a contract manufacturer. 3D printing's advantage comes from taking the digitally scanned model of a patient's skull and "printing" out a matching 3D object layer by layer. About 300 to 500 U.S. patients could use skull bone replacements every month, according to DeFelice.

Thomas Doyle’s Apocalyptic Dioramas (click images for detail) Using materials that would equally be at home amongst idyllic model train sets artist Thomas Doyle builds these incredibly intricate mixed media dioramas that instead suggest something much darker. The sense of loss and a brooding darkness is present in almost every piece, where homes dangle on sheer cliffs, or are surrounded by apocalyptic waste. I found Thomas Doyle while working my way through the strangely-named but enjoyable Gorky’s Granddaughter, an interview series by Christopher Joy and Zachary Keeting who sit down and chat casually with incredible artists.

Synthetic Biology Open Language TED 2013: 4D printed objects 'make themselves' 28 February 2013Last updated at 05:39 ET By Jane Wakefield Technology reporter Video of cube self-folding strand courtesy Self-Assembly Lab, MIT/Stratasys Many are only just getting their heads around the idea of 3D printing but scientists at MIT are already working on an upgrade: 4D printing. At the TED conference in Los Angeles, architect and computer scientist Skylar Tibbits showed how the process allows objects to self-assemble. It could be used to install objects in hard-to-reach places such as underground water pipes, he suggested. It might also herald an age of self-assembling furniture, said experts. Smart materials TED fellow Mr Tibbits, from the MIT's (Massachusetts Institute of Technology) self-assembly lab, explained what the extra dimension involved. "We're proposing that the fourth dimension is time and that over time static objects will transform and adapt," he told the BBC. The process uses a specialised 3D printer made by Stratasys that can create multi-layered materials.

Animation on a Bike Here’s a wonderful zoetrope animation using paper discs mounted on bicycle wheels by Katy Beveridge as part of her 3rd year dissertation project at CSM in London. Beveridge mentions being partially influenced by the technique of Tim Wheatley who has also explored the ideas of bicycle-wheel animation. See many more zoetrope videos previously on Colossal. (via peta pixel) The Rise of Desktop Manufacturing in the Great Recession In the last post, we talked about the changing nature of markets and marketing in the Great Recession. This time we'll focus in on one of the results of these changes: Desktop Manufacturing. In the old days, it could cost upwards of $10,000 to $20,000 just to create the custom molds and dies required to produce an item in a factory. Then you had to cover the costs associated with prepping the manufacturing line to produce your item. As a result, your up-front costs could easily surpass $50,000 before your first item rolled off of the line. To make the effort worthwhile, you needed to produce a large number of items to spread these fixed costs around. Today, you can get small runs of custom manufactured items for less than $100. A Laser-Cut Lamp Design Today, both of these technologies are being used mostly by hobbyist and early adopters, and both are undergoing rapid adoption and enhancement. The ReprapSelf-Replicating 3D Printer

TED 2013: SpaceTop 3D see-through computer revealed 27 February 2013Last updated at 11:20 ET By Jane Wakefield Technology reporter A video from MIT Media Lab/Microsoft Applied Sciences shows how the technology works A transparent computer that allows users to reach inside and touch digital content has been unveiled at the TED conference in Los Angeles. TED fellow Jinha Lee has been working on the SpaceTop 3D desktop in collaboration with Microsoft. Allowing people to interact with machines in the same way they do with solid objects could make computing much more intuitive, he told the BBC. He can see the system coming into general use within a decade. The system consists of a transparent LED display with built-in cameras, which track the user's gestures and eye movements. Human touch The design was inspired by what he sees as a human need to interact with things. "Spatial memory, where the body intuitively remembers where things are, is a very human skill," he said. Jinha Lee thinks this technology could bring learning to life for children

10 Websites To Make You Think | The Online Learning Blog from Study2U Supposedly browsing the internet requires more brain power than watching television. Although judging from some of the websites we’ve come across that assumption is cast into doubt. Here’s some of the sites we like that might get your brain to sit up and listen. Ted A conference that started in 1984 bringing together experts in technology, entertainment and design quickly grew into so much more. The conference itself is invitation only, but the website features all the talks at the conference in high res video format. New Scientist The New Scientist website carries new articles from the magazine as well as the NS archive of over 76,000 pieces. Big Think The Big Think website is a collection of ‘global thought leaders’ who offer their thoughts and analysis on world events and other important developments. Café Scientifque ‘for the price of a cup of coffee or a glass of wine, anyone can come to explore the latest ideas in science and technology’ Breathing Earth Arts & Letters Daily How Stuff Works

Why is Open Hardware inherently sustainable? Reflections on the role of Open Hardware and Peer Production in insuring a sustainable world In this article, I want to list the reasons why I believe that the trend towards open and distributed manufacturing is a vital part of ensuring a sustainable society. For those that are not familiar with it, open hardware is a practice where designs are shared through open licenses in a community, and those designs can then be used by manufacturers, who can make and sell the product, eventually making a profit, but they cannot rely on any rents deriving from intellectual property. The first reason that open hardware is a sustainable practice is that innovation cannot be privatized and taken away from the benefit of collective humanity. The second reason that open hardware contributes to sustainability, and actually is “inherently” sustainable, lies in the motivation behind the research, innovation, and production. Challenges The main issues center around the funding mechanism.

A sensational breakthrough: the first bionic hand that can feel - News - Gadgets & Tech The patient is an unnamed man in his 20s living in Rome who lost the lower part of his arm following an accident, said Silvestro Micera of the Ecole Polytechnique Federale de Lausanne in Switzerland. The wiring of his new bionic hand will be connected to the patient’s nervous system with the hope that the man will be able to control the movements of the hand as well as receiving touch signals from the hand’s skin sensors. Dr Micera said that the hand will be attached directly to the patient’s nervous system via electrodes clipped onto two of the arm’s main nerves, the median and the ulnar nerves. This should allow the man to control the hand by his thoughts, as well as receiving sensory signals to his brain from the hand’s sensors. “This is real progress, real hope for amputees. “It is clear that the more sensory feeling an amputee has, the more likely you will get full acceptance of that limb,” he told the American Association for the Advancement of Science meeting in Boston.

Make A Cheap & Easy Solar USB Charger With An Altoids Tin Photos by Joshua Zimmerman The craftster behind the very popular $3 solar-powered emergency radio is back with a new awesome project: a cheap solar battery charger with a USB plug. Zimmerman wrote, saying that he saw a lot of small solar powered chargers being talked about over Earth Day, but there was a big problem: "They're all quite nice, but also quite expensive. So, he came up with his own, using one of our favorite reusable items -- the ever wonderful Altoids tin. In looking for the cheapest way to accomplish the task, Zimmerman found that he could build a USB solar charger for under $30 (or $10 if be buys parts in bulk, though it's not likely you'll be buying bulk solar cells and DC-to-USB converter circuits). Zimmerman states, "The central brain of our project is a DC to USB converter circuit. It can be done with a Minty Boost kit, a premade circuit off of ebay, or grabbing one from a cheap USB charger.

The Make-It-Yourself Manufacturing Turn The rise of online shopping has brought about a world in which consumers no longer have to leave the comfort of their own sofas to order any product their hearts could desire. But a series of changes in personal manufacturing technology could leave even online distributors in the dust. In the near future, any slob will be able to print out a toothbrush like we would a school report, while creators, innovators, and entrepreneurs will have access to unprecedented opportunities. In their report "Factory @ Home: The Emerging Economy of Personal Fabrication", Cornell engineering professor Hod Lipson and consultant Melba Kurman take a look at the possibilities implicit in these new technologies and some things lawmakers and the public can do to make small-scale home manufacturing a reality: A number of converging factors are bringing industrial-scale design and manufacturing tools to a tipping point where they will become cheap, reliable, easy and versatile enough for personal use.