Scottish Researchers are 3D Printing Extremely Delicate Stem Cells. 3D printing has gained a strong foothold in numerous areas of the medical industry today, where innovators are making impressive and significant impacts with 3D printed models that help in diagnosing conditions and navigating new and complex surgeries, as well as creating devices like 3D printed prosthetics which have already given many a new lease on life. 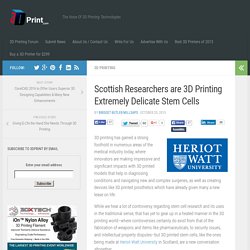 While we hear a lot of controversy regarding stem cell research and its uses in the traditional sense, that has yet to gear up in a heated manner in the 3D printing world–where controversies certainly do exist from that of the fabrication of weapons and items like pharmaceuticals, to security issues, and intellectual property disputes–but 3D printed stem cells, like the ones being made at Heriot-Watt University in Scotland, are a new conversation altogether. Dr. Will Shu The team at Heriot-Watt is led by Dr. Bioengineering, 3D cell printing, Heriot-Watt University Picture: Scottish Enterprise/McAteer. Now We Can Grow Kidney Structures from Stem Cells. 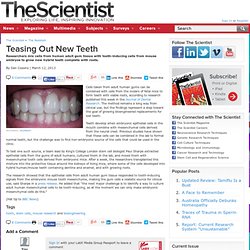 WIKIMEDIA, DOZENISTCells taken from adult human gums can be combined with cells from the molars of fetal mice to form teeth with viable roots, according to research published this week in the Journal of Dental Research. Scientists Create New Ear Using 3D Printing And Living Cell Injections. WASHINGTON -- Printing out body parts? 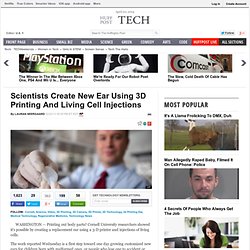 Cornell University researchers showed it's possible by creating a replacement ear using a 3-D printer and injections of living cells. The work reported Wednesday is a first step toward one day growing customized new ears for children born with malformed ones, or people who lose one to accident or disease. It's part of the hot field of tissue regeneration, trying to regrow all kinds of body parts.

Scientists hope using 3-D printing technology might offer a speedier method with more lifelike results. If it pans out, "this enables us to rapidly customize implants for whoever needs them," said Cornell biomedical engineer Lawrence Bonassar, who co-authored the research published online in the journal PLoS One. This first-step work crafted a human-shaped ear that grew with cartilage from a cow, easier to obtain than human cartilage, especially the uniquely flexible kind that makes up ears. 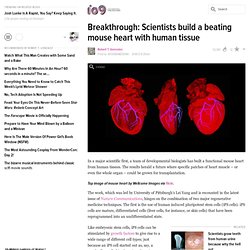 Sorry, should have clarified that. In research parlance they're just known as human urine cells, or "hU. " Trachea transplant boosts adult stem cell potential. There was a high level of excitement in the medical profession last week when a breakthrough in adult stem cell research was reported in the online edition of The Lancet. 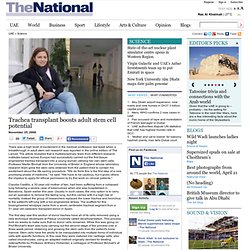 The article revealed that a multidisciplinary team from different research institutes based across Europe had successfully carried out the first tissue-engineered trachea transplant into a young woman utilising her own stem cells. Professor Martin Birchall from the University of Bristol in England whose laboratory research team grew the stem cells obtained from the patient tried to contain his excitement about the life-saving procedure.

"We do think this is the first step of a new promising phase of medicine," he said. "We have to be cautious, but it gives others the impetus to apply for ethical permission to try this work on clinical patients. " Toddler with bioengineered windpipe dies three months after surgery. A First: Human Liver Created from Stem Cells. This is a “ghost organ.” It has been decelluralized, leaving only connective tissue. The organ can then be reseeded with a patient’s own cells to regenerate it so it can be transplanted without fear of tissue rejection. This is experimental. : pics. Researchers grow human kidney using stem cells.

Around 2% of all adults experience kidney disease, and which results in tens of thousands of deaths each year. 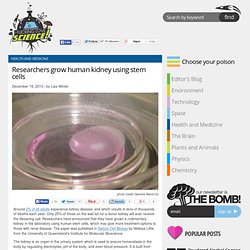 Only 25% of those on the wait list for a donor kidney will ever receive the lifesaving call. Scientists make 'laboratory-grown' kidney. 14 April 2013Last updated at 19:29 ET By James Gallagher Health and science reporter, BBC News The rat kidney was grown in the laboratory A kidney "grown" in the laboratory has been transplanted into animals where it started to produce urine, US scientists say. 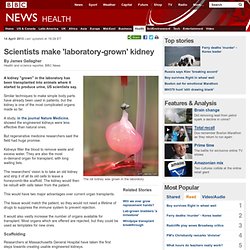 Similar techniques to make simple body parts have already been used in patients, but the kidney is one of the most complicated organs made so far. A study, in the journal Nature Medicine, showed the engineered kidneys were less effective than natural ones. But regenerative medicine researchers said the field had huge promise. Kidneys filter the blood to remove waste and excess water. The researchers' vision is to take an old kidney and strip it of all its old cells to leave a honeycomb-like scaffold.

" The Artificial Womb Is Born And The World of the Matrix Begins. ”One by one the eggs were transferred from their test-tubes to the larger containers; deftly the peritoneal lining was slit, the morula dropped into place, the saline solution poured . . . and already the bottle had passed on through an opening in the wall, slowly on into the Social Predestination Room.” 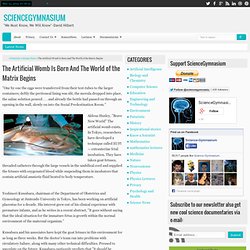 Aldous Huxley, ”Brave New World” The artificial womb exists. In Tokyo, researchers have developed a technique called EUFI — extrauterine fetal incubation. They have taken goat fetuses, threaded catheters through the large vessels in the umbilical cord and supplied the fetuses with oxygenated blood while suspending them in incubators that contain artificial amniotic fluid heated to body temperature. Yoshinori Kuwabara, chairman of the Department of Obstetrics and Gynecology at Juntendo University in Tokyo, has been working on artificial placentas for a decade. Kuwabara and his associates have kept the goat fetuses in this environment for as long as three weeks. Source. Lab-grown cartilage used to reconstruct nostrils. The biomedicine team at the University of Basel has reported the first ever successful nose reconstruction surgery using cartilage grown in the laboratory. 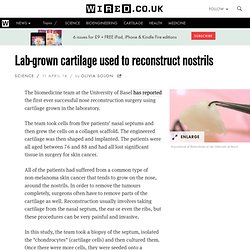 The team took cells from five patients' nasal septums and then grew the cells on a collagen scaffold. The engineered cartilage was then shaped and implanted. The patients were all aged between 76 and 88 and had all lost significant tissue in surgery for skin cancer. Lab-grown nostril and vagina constructed with similar techniques. Scientists use 3D printing to make artificial blood vessels. The tangled highway of blood vessels that twists and turns inside our bodies, delivering essential nutrients and disposing of hazardous waste to keep our organs working properly has been a conundrum for scientists trying to make artificial vessels from scratch. 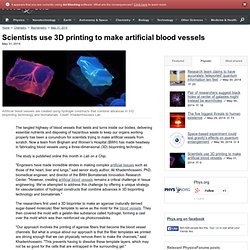 Now a team from Brigham and Women's Hospital (BWH) has made headway in fabricating blood vessels using a three-dimensional (3D) bioprinting technique. The study is published online this month in Lab on a Chip. "Engineers have made incredible strides in making complex artificial tissues such as those of the heart, liver and lungs," said senior study author, Ali Khademhosseini, PhD, biomedical engineer, and director of the BWH Biomaterials Innovation Research Center. "However, creating artificial blood vessels remains a critical challenge in tissue engineering.