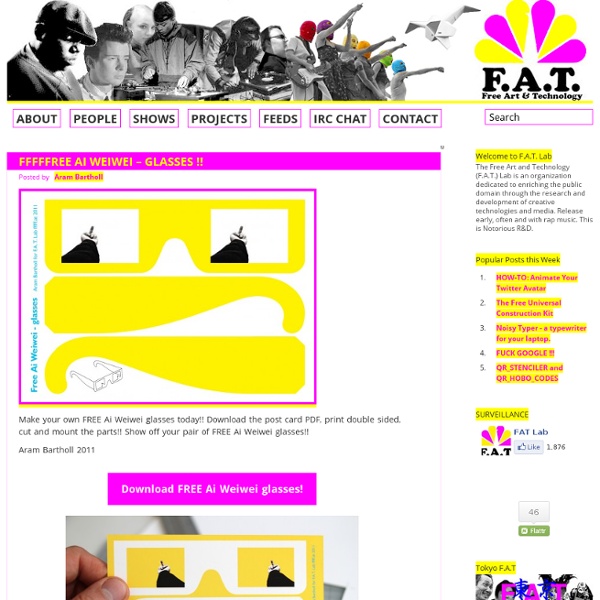 because im addicted DeCordova Joins Museum Community In Supporting Detained Artist File photo, Chinese artist Ai Weiwei (AP) BOSTON — A large, red banner with the words “Free Ai Weiwei” now hangs outside the deCordova Sculpture Park and Museum in Lincoln. It’s a peaceful gesture expressing concern for acclaimed Chinese artist Ai Weiwei. He was arrested by Chinese police on April 3. “We wanted to have a public response and keep the public aware of Ai Weiwei,” said deCordova director Dennis Kois, “so we decided to do something very simple and straightforward.” The museum is also offering literature to visitors in the lobby. Ai Weiwei is known for being outspoken and creating politically charged works. “As a contemporary art museum we’re part of a larger world, a larger dialogue and a larger art-making community,” Kois said. This image shows a two-story-high black-and-white photograph of Chinese artist Ai Weiwei outside the Lisson Gallery in London. Speaking by phone from North Carolina, Kois said Ai Weiwei’s arrest is a hot topic among his peers.

Peace Pod Bokja I was so excited to have spotted these chairs by Bokja on Table Tonic this morning – but WTF, how can anybody not notice them? These exuberant pieces of furniture are the fruits of Beirut-based Hoda Baroudi […] Yabba Dabba Doo Would you have ever guessed that this Flinstones inspired house belonged to television legend Dick Clark? Anish Kapoor rejects China show in support of Ai Weiwei | The Art Newspaper Censorship China British Council had asked the artist to consider a show in Tiananmen Square By Martin Bailey. From Art Basel daily editionPublished online: 14 June 2011 Kapoor is not Beijing-bound london. Kapoor’s spokeswoman confirmed to The Art Newspaper that he had been invited to China, but “he is not going to proceed in view of the detention of Ai Weiwei.” Discussions began about a potential exhibition at the National Museum of China last October, when two directors of London’s Lisson Gallery (which represents Kapoor, stand 2.1/K12 at Art Basel) were in Beijing. Kapoor has been outspoken in his criticism of the Chinese government’s treatment of Ai Weiwei, since his detention on 3 April. British Council chief executive Martin Davidson believes in “freedom of cultural expression”, but is keen for the programme to go ahead. Submit a comment All comments are moderated. Email* Valid email address required Valid email address required Name* Name required Name required City*

Popular iPhone Cases Popular All « PrevNext » « Prev1234 ... 80Next » Video Transcript What is art? From the materials we use to the hands that ply them, we match the care that goes into everything we make to that of the artist that designed it. It begins with those thousands of artists entrusting their original work to another. It's the craftsmen that process, sort, inspect and pack your case. It's the high density materials that ensure premium protection. It's the proprietary inks that mean the design you buy is the design you get. All together, thousands of steps were taken to make your iPhone Case. This is our process. This is our art.

Free Ai Weiwei by Jonathan Blaustein Photograph by Hugo Tillman America loves a good bad guy. We’re never really at our best until our backs are against the wall. Just look at Rocky Balboa. He was fat, tired and lazy until Clubber Lang came along. So what are we to do now? Enter Ai Weiwei. Oh, yeah. Which brings us back to my nomination for America’s new Enemy Number 1: The cadre of ruthless assholes who runs the Chinese Communist Party. But hear me out. Ever since I first saw Zhang Yimou’s “Hero” seven years ago, I knew this day was coming. That’s why Ai Weiwei got locked up. So Free Ai Weiwei.

Detained Chinese artist Ai Weiwei remembered with new Tate Modern display | Art and design The Tate Modern has installed 10 tonnes of Ai Weiwei's hand-crafted porcelain sunflower seeds in one of its surrealism galleries as concern continues over the artist's disappearance 75 days ago. The display, loaned from the artist, comprises just under a 10th of the seeds which covered much of the London gallery's Turbine Hall from October 2010 to May this year. Visitors will be able to walk around the seeds, which have been carefully sculpted into a five-metre wide conical form. The display on the third floor of Tate Modern renews the focus on Ai's disappearance and detention without charge by the Chinese authorities. The gallery's new director, Chris Dercon, said: "Tate remains deeply concerned about Ai Weiwei's detention. Ai's work can be seen across London at the moment. Ai has not been seen since he was detained on 3 April when he was about to board a Hong Kong-bound plane in Beijing. Last month, she was reported as saying he was in good physical health.

15 creative and nerdy wedding invitations « blah blah blah… <——– To keep updated with my blog, take a minute and like me on Facebook! Thanks for the support, Stumblers! :) Ah, I love these! They make me want to get married just so I can have a super creative invitation. I think my favorite is either the record or the movie tickets or the…. See all the awesome invitations after the jump! If you enjoyed this post, you might enjoy my post about a zombie-proof mansion! Like this: Like Loading... Hong Kong artists revel in freedom to support Ai Weiwei