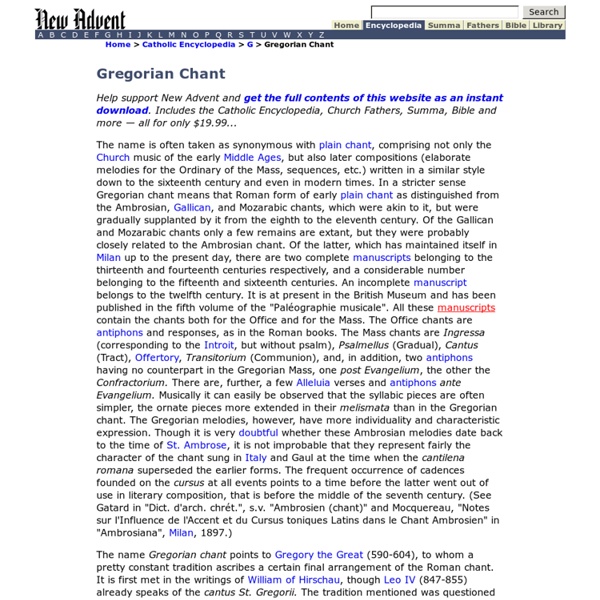 Help support New Advent and get the full contents of this website as an instant download. Includes the Catholic Encyclopedia, Church Fathers, Summa, Bible and more — all for only $19.99... The name is often taken as synonymous with plain chant, comprising not only the Church music of the early Middle Ages, but also later compositions (elaborate melodies for the Ordinary of the Mass, sequences, etc.) written in a similar style down to the sixteenth century and even in modern times. In a stricter sense Gregorian chant means that Roman form of early plain chant as distinguished from the Ambrosian, Gallican, and Mozarabic chants, which were akin to it, but were gradually supplanted by it from the eighth to the eleventh century. Of the Gallican and Mozarabic chants only a few remains are extant, but they were probably closely related to the Ambrosian chant. The principal proofs for a Gregorian tradition may be summarized thus: Comments Sources About this page APA citation. MLA citation.

Gregorian Chant Notation This is a description of the traditional Gregorian Chant notation, so that anyone will be able to read the notation and sing it. Chant is written in neumes, which are notes sung on a single syllable. Gregorian Chant has no meter at all, though it does have a rhythm of groups of 2 or 3 notes. Vertical lines separate musical phrases and may sometimes allow a pause for taking a breath, like Gregorian chant This is a page from a book whose title is Graduale Aboense. Here you can see a song about St. Henry, a holy man from Finland. The black marks, which are above the words, show what the music looks like. The song starts at the large letter G in the middle of the page. Example Hynn to John, sung in Latin

The Gregorian Chant History The Gregorian chant is the oldest musical manifestation of the Occident and it has its roots in the songs of the old synagogues, since Jesus Christ`s times. The first Christians and disciples of Christ, were converted Jewish that, persevering in prayer, continued to sing the psalms and songs of the Old Testament as they were used, although with other sense. As long as the Greek, not Jews and Romans were also becoming Christian, elements of the music and the Greek-French-Roman culture were being included to the Jewish songs. The formation period of the Gregorian chant includes the centuries I to VI, reaching the peak in the centuries IX, X and XI, beginning of the Medium Age; it begins, then, its decadence. The name is an homage to Pope Gregory I (540-604) that did a collection of pieces, publishing them in two books: Antiphonarium, group or referring melodies at the Canonical Hours, and the Graduale Romanum, containing Santa Mass`s songs. Starting from the initiative talent of D.

Enigma – Electronic music meets Gregorian Chants Enigma first caught my attention because of the Gregorian chants they integrated into their music, especially on their third album Le Roi est Mort, released in 1996. But I have to admit that my favorite CD remains McMxc A.D. in which they succeeded in combining electronic music, electrical guitars and Gregorian chants! Rather than a band, Enigma is a musical project that mixed electronic music with traditional elements from the beginning. Imagine a time when the music world just got used to synthesizer beats! Image: Tony the Misfit When their first hit song “Sadeness (Part 1)” came out in 1990, it seemed like the world was stunned and enchanted at the same time. Composer Timelines for different Classical Music Periods Musicologists divide the history of classical music into different eras or periods - see our description of the different Classical Music Periods. It is quite common to see historical events mapped out on a Timeline so that you can see the events in order. Such diagrams help you to see the "big picture", and with music you can plot the lifetimes of the famous composers. On such a timeline you can see which composers are contemporaries, and begin to get an appreciation for the number of composers creating music during different periods. Here are our own Composer Timelines for the following Music Periods:

The History Of Gregorian Chant The Gregorian Chant is the collective name given to a whole tradition of chants that evolved in the world from the times of the Old Testament of The Christian Bible and have survived even today. These chants have been quite associated with Christianity and indeed they have been sung in churches for over two thousand years now. It is certain that the Gregorian chant - though not in that name - existed even during the times of Jesus Christ, and Christ might have sung these chants in His teachings to people. The Gregorian Chant contains a collection of what is known as the plainchant (from the French plein chant, which means 'full song') - a series of unaccompanied vocal music that follows a monophone.