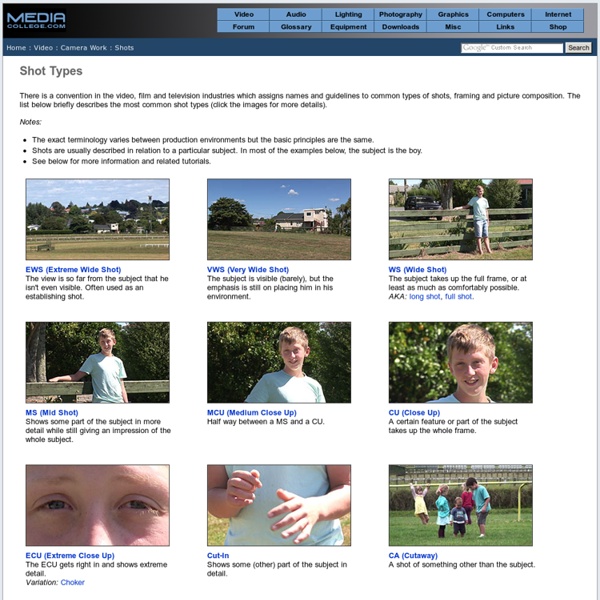 There is a convention in the video, film and television industries which assigns names and guidelines to common types of shots, framing and picture composition. The list below briefly describes the most common shot types (click the images for more details). Notes: The exact terminology varies between production environments but the basic principles are the same. Shots are usually described in relation to a particular subject. In most of the examples below, the subject is the boy. EWS (Extreme Wide Shot) The view is so far from the subject that he isn't even visible. VWS (Very Wide Shot) The subject is visible (barely), but the emphasis is still on placing him in his environment. MS (Mid Shot) Shows some part of the subject in more detail while still giving an impression of the whole subject. CU (Close Up) A certain feature or part of the subject takes up the whole frame. Cut-In Shows some (other) part of the subject in detail. Two-Shot A shot of two people, framed similarly to a mid shot.

Camera Angles Camera angles and movements combine to create a sequence of images, just as words, word order and punctuation combine to make the meaning of a sentence. You need a straightforward set of key terms to describe them. Describing Shots When describing camera angles, or creating them yourself, you have to think about three important factors — The FRAMING or the LENGTH of shot — The ANGLE of the shot Looking for ideas for a short film? My Log Lines Log lines for all of my short film scripts, with links to more details about each short film screenplay. In gory detail, here’s what you get when you buy the book 26 Short Screenplays for Independent Filmmakers! If you want a read a sample or preview before you buy the book, download my free short film scripts. Amazon.com also lets you preview any page in the book. Ideas for a short film: More funny

The Grammar of TV and Film Zoom. In zooming in the camera does not move; the lens is focussed down from a long-shot to a close-up whilst the picture is still being shown. The subject is magnified, and attention is concentrated on details previously invisible as the shot tightens (contrast tracking). Film Studies 101: The 30 Camera Shots Every Film Fan Needs To Know, Feature The cinematographer's art often seems as much black magic as technique, taking a few actors milling around a set and turning it into something cinematic, evocative and occasionally iconic. Amidst all the voodoo and mystery, however, there is concrete science behind those money shots so we've identified thirty of the most important camera shots to help you distinguish your dolly zooms from your Dutch tilts. Aerial Shot An exterior shot filmed from — hey! — the air. Often used to establish a (usually exotic) location.

7 Ways Teachers Can Create Videos without Installing any Software 1- Wevideo WeVideo is a collaborative, cloud-based online video editor that is free to use, with affordable options to export in HD and store additional videos 2- Google Story Builder This Story Builder allows you to create mini-movies or video stories with the feel of Google Docs. You can also personalize the videos you create using the characters, story, and even music of your choosing and when you finish you can share your final product with others. 3- Pixorial In 'Hugo,' Scorsese Salutes A Movie Magician Hugo Cabret (Asa Butterfield) is a 12-year-old orphan whose life changes after he encounters Georges Melies (Ben Kingsley) in his magical toy store in a Paris train station. Jaap Buitendijk/GK Films hide caption toggle caption Jaap Buitendijk/GK Films In his 2007 children's book, The Invention of Hugo Cabret, author Brian Selznick tells the story of an orphan named Hugo who lives in the walls of a Paris train station and spends his time winding the clocks.

Green Screen on the iPad Green screen is one of the best learning tools in our learning commons. Our students are really making their learning come alive by recording video using the green screen. DoInk has just released a new Green Screen App for the iPad. It is an easy to use App that allows you create green screen in one shot, rather than edit it using iMovie or another video editing application. For this particular group of stuents, they wanted to be newscasters. EarlyCinema.com 17th Century Use of Magic Lanterns 1827 First still photograph taken, using a glass plate technique Claude Niepce's photograph the View from a Window at Le Gras took nearly eight hours to expose. 1832 Joseph Plateau and sons introduce the Phenakistoscope. Like other toys of its kind, the Phenakistoscope was one of the more successful illusion toys.