Pensado's Place - Learn how to produce, record, mix, and master music and audio 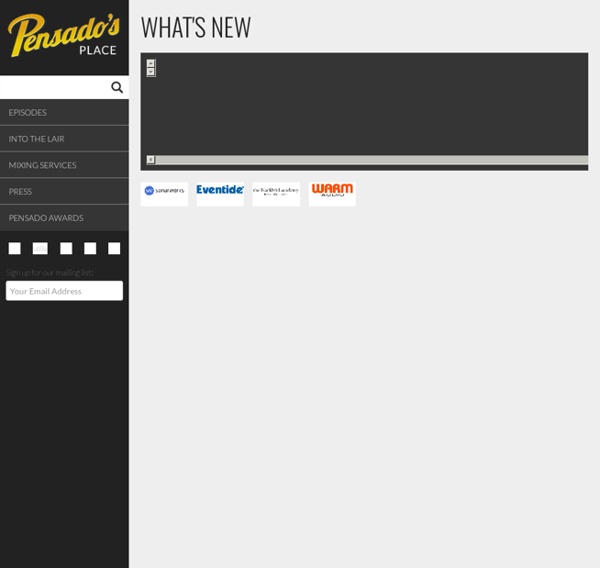 The 10 best lectures on electronic music ever; watch them now Thanks to the wonders of the internet, one’s quest for knowledge really has no limitations. Between the plethora of digitized articles, documentaries, and—on the technical side of things—instructional videos and guides around, there is no shortage of information accessible to those who seek to learn more about the ever-expanding world of electronic music. The lecture, however, makes for a unique form of information sharing as it not only provides the necessary facts and details, but also allows for attendees (and, eventually, viewers) to get a sense of the person behind these facets of knowledge. With that in mind, Beatport News has compiled what we believe are 10 amazing lectures on electronic music, gathering videos from modern innovators, dance music originators, technical wizards, and a few that simply capture a time and place in electronic music too perfectly to overlook. Below are our 10 picks guaranteed to teach every electronic music enthusiast and music maker something new.

How to Create Width, Height and Depth in a Mix The hallmark of a great recording/mix for me is one where the music all lives within a tangible, dimensional world. The exception being songs that call for a two-dimensional or more lo-fi approach. In general, a recording that has width, height, and depth creates for a compelling sound. And truthfully I think part of the magic of a song is pulling the listener into a different world — creating the illusion of that space only adds to that effect. What is width, height, and depth? Just like in film or paintings we can create the illusion of three dimensions on a two dimensional surface. Elite Sessions: Jaytech - Pyramind Online Video Tip: Creating Depth in Drums by Using Foley Pyramind Training – Synthesis & Sound Design Instructor – Taylor Elsasser – runs you through his approach while constructing drum patterns and using foley to incorporate uniqueness & life. Elite Session with Roger Shah (Armada / Blackhole / Magic Island)

FACTmagazine Subscribe to FACT TV: From the start of July through to the end of September, Jackmaster will hold down a residency at XOYO, playing every Saturday with a variety of guests that includes Joy Orbison, Moodymann and Kenny Dope. This Saturday, he shares the stage with two titans of grime and dubstep, Slimzee and Loefah. A member of Pay As U Go Cartel and a key part of Rinse FM from the start, Slimzee was the grime DJ. He’d spin for the two best MCs – Dizzee Rascal and Wiley – and if a rival DJ had a special VIP dubplate, Slimzee already had the VIP of the VIP. After spending some time only DJing sporadically, Slimzee has returned in a big way this year, hosting an NTS show that he’s opened up to the likes of Slackk, Novelist, Skepta, Jammer and Mumdance.

15 Steps To A Better Mix Audio mixing is one of the most interesting of all operations when completing a recording. For the rare few it's purely intuitive and comes out great without much thought, but for most everyone else, it's an operation in which you only get better by comparison and repetition. Many musicians and beginning engineers will often flail on a mix, trying everything with wild abandon and no focus, or not trying anything at all. It really helps if you have a process and this excerpt from the latest 3rd edition of The Mixing Engineer's Handbook provides just that. "Mixing is a nebulous art in that most musicians and engineers learn more by feel and listening than being taught. As a result, a number of important items in a mix can be easily overlooked, and these can mean the difference between a mix that sounds polished and professional and one that sounds amateurish.

The 20 best VST plug-in synths in the world today Curve is a subtractive synthesiser, but not specifically an analogue one. Yes, it can do analogue, and very well indeed, but its three oscillators aren't limited to the usual analogue waveforms. Instead, custom waves can be created by dragging (up to 40) points around in the main display to create both straight lines and curves. Curve 2 introduced a new look for the synth, as well as a good number of new features and a ton of new sounds. It’s much more flexible than its predecessor, and one that sounds nothing short of magnificent. Metering Audio metering is one of the most confusing and complex aspects of sound recording. Technical Editor Hugh Robjohns answers some of the most common questions on the topic. There are literally dozens of different audio metering systems in common use around the world — and they often appear to read completely differently when supposedly displaying the same audio signal!

Music Theory As of July 1, 2013 ThinkQuest has been discontinued. We would like to thank everyone for being a part of the ThinkQuest global community: Students - For your limitless creativity and innovation, which inspires us all. 5 Ways To A Better Mix That Don't Cost A Penny - Pro Tools Expert - Avid Pro Tools Mixing can seem like a dark art reserved for the chosen few, for some mixing their first tracks can send their head in a spin. Great mixers are worth their weight in gold and in high demand, but for many the chance of ever having a top mix engineer get near your stuff is highly unlikely. Here are 5 ways to a better mix that don’t cost a penny. 5 Ways To A Better Mix 1 - Listen To Reference Tracks This is something that even top engineers do. Synth Secrets, Part 23: Formant Synthesis Last month, we discussed a way of emulating acoustic musical instruments using short delay lines such as spring reverbs and analogue reverb/echo units. At the end of that article, I posed the following question: "Couldn't we have avoided this talk of echoes, RT60s, room modes, and all that other stuff, and achieved the same result with a bunch of fixed (or 'formant') filters?". This month, we're going to answer that question.

Harnessing The Power Of DSP In the previous segment, we looked at the basic process of using a high-resolution FFT (Fast Fourier Transform) analyzer to view the frequency and phase response of a 12-inch cone driver in a typical 12-inch/2-way loudspeaker. In that segment, we established that the 30-degree off-axis response of the cone driver is substantially lower in level (12 to 18 dB), as well as highly irregular in phase and frequency above approximately 2 kHz, when compared to the driver’s on-axis response (Figure 1). This information allows us make an educated guess at the range where the cone driver should be crossed over.

One Note Techno John Selway In the second installment of Techno Fundamentals, electronic music producer and Dubspot instructor John Selway looks at the “one note lead” idea using Ableton Live‘s Analog instrument. Commonly used in techno and other styles of electronic dance music where melody takes a backseat to rhythm, the “one note lead” is a simple yet very effective composition technique. Just in case you missed the previous tutorial, More Than A Bassline, check it out here, and do stay tuned for part three. Continuing where I left off in the first Techno Fundamentals tutorial, in this new installment I’m demonstrating another take on the idea of starting with a very simple musical element that, with a few precise sound design techniques and real time control, becomes a major element and source of energy for a track. It’s what I think of as a “one note lead” and it’s a very common element used in techno and other styles of electronic dance music where melody may take a back seat to rhythm and noise.