How To Remove Ambient Noise From Your Audio Files Using Audacity 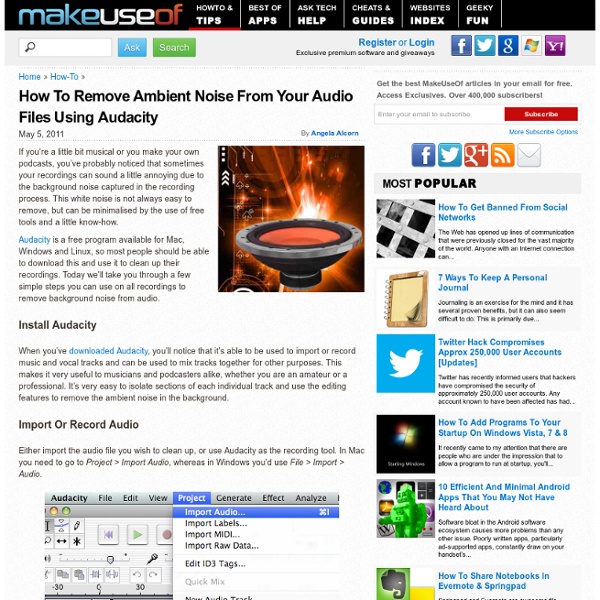 Audacity is a free program available for Mac, Windows and Linux, so most people should be able to download this and use it to clean up their recordings. Today we’ll take you through a few simple steps you can use on all recordings to remove background noise from audio. Install Audacity When you’ve downloaded Audacity, you’ll notice that it’s able to be used to import or record music and vocal tracks and can be used to mix tracks together for other purposes. This makes it very useful to musicians and podcasters alike, whether you are an amateur or a professional. Import Or Record Audio Either import the audio file you wish to clean up, or use Audacity as the recording tool. Isolate A Quiet Moment After importing, you’ll see the tracks of the audio file as separate lines in Audacity. Zoom in until you can find a moment where there was no deliberate sound in the track (the flattest bit you can find), such as when you paused for a moment. Step 1 – Get Noise Profile Image Credit: ShutterStock

A Beginner's Guide To Producing Home Music Recordings With Audacity For many musicians, the cost of paying a professional sound engineer to record and produce a demo CD or demo tracks for an online talent profile is just too high. A much more affordable option is to learn a little about music production and recording techniques yourself and use your favorite tools on your computer to record your own music. For some musicians, the process of recording yourself is a learning exercise, designed to let you know precisely what you sound like so you can improve your performance. But whatever your reason for recording yourself, it’s good to know a handful of decent techniques for the best free software available – and that software is Audacity. Get Audacity Before you start recording, make sure you get the latest version of Audacity. Prepare Your Recording Equipment Before you make an audio recording, make sure you have researched a little about the best methods to record your instruments, including microphone placement and the best microphones to use.

The How-To Geek Guide to Audio Editing: Cutting, Trimming & Arranging Audacity novices often start with lofty project ideas, but sometimes they lack the basics. Knowing how to cut and trim tracks is basic audio editing and is a fundamental starting point for making more elaborate arrangements. For this exercise, I’ll be making a ringtone from a Castlevania: Symphony of the Night track. I have the original CD and used that so I started with better quality audio than an MP3. I know which parts I want to edit in the track, but a quick play-through will help me look for those areas visually. The scrubber in the above screenshot is pointing to a lull in the music, where the audio drops low or fades out. First, let’s make sure the Selection tool is active. Next, let’s make a selection in an area of the track where we want to make an edit. I know that the song changes somewhere in here. That’s much better, isn’t it? Clicking and dragging while this cursor is shown will allow you to change that particular selection boundary. This converts our selection to silence.

Audacity Wiki How To Remove Vocals From Music Tracks Using Audacity Ever get a sudden, inexplicably irresistible desire for karaoke? Maybe you like the music of a song but can’t stand the lead singer? Here’s how to use remove the vocals from most music tracks in a few simple steps. How It Works Vocals are normally placed in the “center channel.” Stereo tracks have two channels, but not all of the instruments are balanced evenly. On the whole, however this process works really well if you start with good quality audio. Removing the Center Channel Fire up Audacity and load your song of choice. The first thing we need to do is break the song’s two channels into two separate tracks. Next, pick a channel (it doesn’t matter which) and double click to select the entire track. Go to Effect > Invert. If you hit play, you’ll notice the song sounds a little funny. That’s it! Yatri Trivedi is a monk-like geek.

How To Create Your Own Vocal-Free Karaoke Tracks I’m sure you will agree with me that there’s nothing better for the spirit than karaoke. Whether you like singing or not, once you get over the initial embarrassment and start picturing yourself standing on stage and singing with a real band, it becomes a truly uplifting experience. Karaoke is not necessarily a group activity – what about karaoke tracks you can listen to in the car, singing along to yourself? Somehow, though, it’s always hard to find the ones you really want. The songs you create may end up sounding a little bit warped, but hey, no one’s coming to karaoke night for the quality of the music anyway. Do It Yourself With Audacity [Windows, Mac, Linux] I’ve been seeing this method around for quite a while, but never believed it actually worked until I tried it. To create karaoke tracks using this method, the first thing you need to do is download Audacity. Once your audio track is loaded, you’ll usually see two blue tracks. So how does it work? Which One Should You Use?

5000 free math, physics, and engineering video tutorials and lectures | Mathematics and Multimedia Here are the collections of sites with math, physics, engineering, and other sciences video tutorials. Some sites also contains non-science videos as well. If you find a site with more than 50 videos, please inform me so I could include it on the list. Khan Academy – more than 2100 2600 not only for math but also includes other subjects such as economics, chemistry, physics and other fields. The math videos range from adding integers up to elementary calculus. Brightstorm - more than 500 math videos in algebra, geometry, Precaculus and Calculus.Just Math Tutorials – more than 1000 videos on algebra, geometry, trigonometry, calculus, differential equations, and linear algebraMIT Open Courseware – videos about math, engineering, sciences, and other fields.Free Video Lectures – more than 700 (excluding Khan Academy’s which they also listed) videos.

Make Your Ringtone Awesome With Retro Videogame Sounds Is your ringtone boring, phone-like and stupid? Don’t be embarrassed – mine was too. Until, that is, I saw the light and changed it to one of the best sounds in the known universe: the Underworld Theme from the original Super Mario Bros. Now every time my phone rings, the people around me gaze in wonder and listen to my awesome ringtone, wishing they thought of that before me. And don’t get me started about my text message ring – it’s the coin sound from that same game. Keep reading to find just a few sites where you can download music and sound effects from a few of video gaming’s classics. If you live in Boulder, Colorado, however, you are forbidden from reading this. Mario Ringtones Let’s start with the sounds you’re actually looking for – Mario. Mario Mayhem offers direct MP3 links to songs from almost every Mario game, if that’s what you’re looking for. Legend of Zelda Ringtones Do you like saving princesses, but prefer to do so wearing a pointy green hat? Pokemon Ringtones Conclusion

Free online Multimedia Training Videos from the University of Westminster 3 Audacity Tips To Enhance Your Recorded Interviews Regardless what you intend to do with the interview, one thing that’s for certain is that you want to develop a reputation as a professional interviewer that produces high-quality, interesting conversations with fascinating people. Only part of the recipe for this is developing interesting and thoughtful questions for your interviewee to answer, but the other significant part of the equation is how well you’ve edited the audio interview into a high-quality, professional show. Many avid audio enthusiasts may find some of the edits below somewhat simple, but for the blogger or podcaster with little audio editing experience, these tips are critical to know. 3 Tips To Enhance Your Interview Audio With Audacity I use the Audacity audio recording software to record and edit all of my interviews. The beauty of Audacity is that you have the capability to “fix” those flaws. Before we start doctoring the audio file with the Audacity audio recording software, let me first introduce the patient.

Storyboarding: Pre-Writing Activity  The more we podcast and have our students create video clips or other digital storytelling projects, the more we need to teach storyboarding as part of the process. Being able to pre-visualize how your story will unfold is becoming a vital skill to have for storytellers. Storyboards are defined as: Graphic organizers such as a series of illustrations or images displayed in sequence for the purpose of pre-visualizing a motion picture, animation, motion graphic or interactive media sequence, including website interactivity. In the book by Roger Essley “Visual Tools for Differentiating Reading & Writing Instruction: Strategies to Help Students Make Abstract Ideas Concrete and Accessible”, he says Storyboarding, or picture writing, is the origin of all written languages, used by ancient cultures before text evolved and as a natural bridge to text. Pre-Writing is defined as Pre-writing is the first stage of the writing process, typically followed by drafting, revision, editing and publishing.