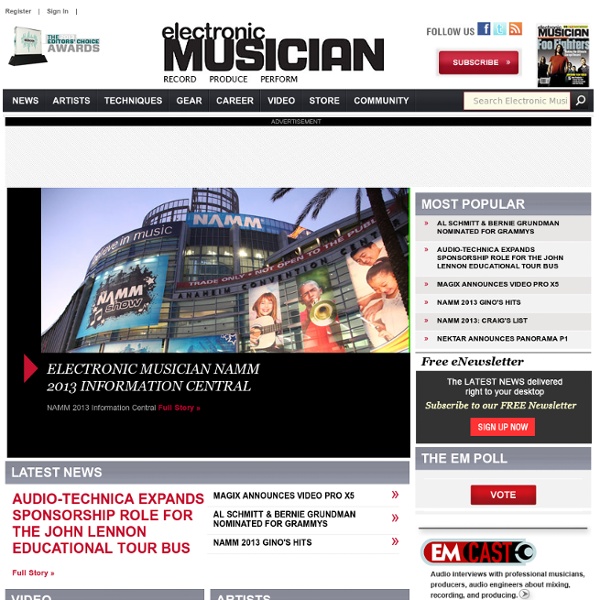 Abelton Life Harmony Central Vespers Sometimes the most rewarding production tricks or techniques are the simplest ones. Certainly they are often the ones that yield the most “happy accidents,” the term I use for when experimentation yields something that rocks. Over the next while, I’m going to go through some of my go-to tricks for inspiration from unlikely sources – the often overlooked, sometimes misunderstood, always unappreciated devices in Live’s catalog. Today we’re going to kick it off with a not-so-common use of the Live’s Gate. This little guy right here: Everyone (or rather MOST people) know about Live’s sidechain input on its compressor. What many people don’t know about, or at least don’t utilize, is the sidechain in on the Gate device. Like sidechain compression, it’s a useful feature to pull out when making things dovetail together in the mix to clean up a signal, but in general when I use it it’s for an entirely different purpose. Basically the approach is this: 1 – Take a sustained note from a synth.

Point Blank Ouvir Música One Note Techno John Selway In the second installment of Techno Fundamentals, electronic music producer and Dubspot instructor John Selway looks at the “one note lead” idea using Ableton Live‘s Analog instrument. Commonly used in techno and other styles of electronic dance music where melody takes a backseat to rhythm, the “one note lead” is a simple yet very effective composition technique. Just in case you missed the previous tutorial, More Than A Bassline, check it out here, and do stay tuned for part three. Continuing where I left off in the first Techno Fundamentals tutorial, in this new installment I’m demonstrating another take on the idea of starting with a very simple musical element that, with a few precise sound design techniques and real time control, becomes a major element and source of energy for a track. We went long recording the tutorial so it’s been split into parts 1 and 2. John Selway is a DJ, producer, and music educator based in New York City. What’s Included:

Music Theory As of July 1, 2013 ThinkQuest has been discontinued. We would like to thank everyone for being a part of the ThinkQuest global community: Students - For your limitless creativity and innovation, which inspires us all. Teachers - For your passion in guiding students on their quest. Partners - For your unwavering support and evangelism. Parents - For supporting the use of technology not only as an instrument of learning, but as a means of creating knowledge. We encourage everyone to continue to “Think, Create and Collaborate,” unleashing the power of technology to teach, share, and inspire. Best wishes, The Oracle Education Foundation FACTmagazine Subscribe to FACT TV: From the start of July through to the end of September, Jackmaster will hold down a residency at XOYO, playing every Saturday with a variety of guests that includes Joy Orbison, Moodymann and Kenny Dope. This Saturday, he shares the stage with two titans of grime and dubstep, Slimzee and Loefah. A member of Pay As U Go Cartel and a key part of Rinse FM from the start, Slimzee was the grime DJ. He’d spin for the two best MCs – Dizzee Rascal and Wiley – and if a rival DJ had a special VIP dubplate, Slimzee already had the VIP of the VIP. Artists are often better than journalists at getting stories out of fellow artists, and in this interview Slimzee speaks candidly about his much-mythologised ASBO, how he started up DJing, the origins of his most infamous dubplate and more. Jackmaster, Slimzee and Loefah play XOYO on Saturday 26th of July. Produced by Luis MuñozFilmed by Kamil Dymak

Pensado's Place - Learn how to produce, record, mix, and master music and audio The 10 best lectures on electronic music ever; watch them now Thanks to the wonders of the internet, one’s quest for knowledge really has no limitations. Between the plethora of digitized articles, documentaries, and—on the technical side of things—instructional videos and guides around, there is no shortage of information accessible to those who seek to learn more about the ever-expanding world of electronic music. The lecture, however, makes for a unique form of information sharing as it not only provides the necessary facts and details, but also allows for attendees (and, eventually, viewers) to get a sense of the person behind these facets of knowledge. With that in mind, Beatport News has compiled what we believe are 10 amazing lectures on electronic music, gathering videos from modern innovators, dance music originators, technical wizards, and a few that simply capture a time and place in electronic music too perfectly to overlook. This 2007 RBMA lecture features a young (well, aged a mere 25 years) A-Trak alongside the late DJ Mehdi.