Why Time Slows Down When We’re Afraid, Speeds Up as We Age, and Gets Warped on Vacation 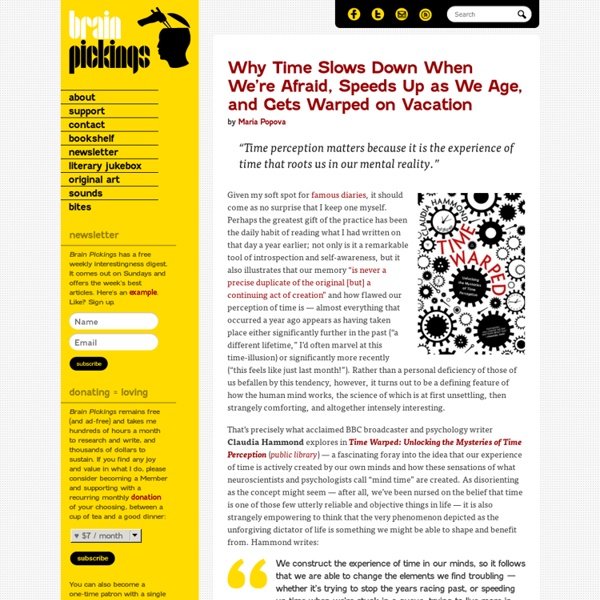 by Maria Popova “Time perception matters because it is the experience of time that roots us in our mental reality.” Given my soft spot for famous diaries, it should come as no surprise that I keep one myself. Perhaps the greatest gift of the practice has been the daily habit of reading what I had written on that day a year earlier; not only is it a remarkable tool of introspection and self-awareness, but it also illustrates that our memory “is never a precise duplicate of the original [but] a continuing act of creation” and how flawed our perception of time is — almost everything that occurred a year ago appears as having taken place either significantly further in the past (“a different lifetime,” I’d often marvel at this time-illusion) or significantly more recently (“this feels like just last month!”). Discus chronologicus, a depiction of time by German engraver Christoph Weigel, published in the early 1720s; from Cartographies of Time. (Click for details) Donating = Loving

Why Do So Many On The Spiritual Path Suffer From EMF Sensitivity? by Max and Lana, Hypersensitivity to electromagnetic fields, or EMF Sensitivity, is a pervasive, daunting, and potentially devastating condition that affects a large number of people, many of whom are on a ‘spiritual path’. While almost everyone is affected to some degree by exposure to man-made and/or geopathic sources of electromagnetic fields, certain bodies are more susceptible. That number is growing as we rapidly increase and expand our technologies and gadgets; as our planet goes through its own fluctuations, natural disasters, and cosmic growing pains; and as people’s personal frequencies are raised and activated for the times ahead.

Better Identification of Viking Corpses Reveals: Half of the Warriors Were Female Shield maidens are not a myth! A recent archaeological discovery has shattered the stereotype of exclusively male Viking warriors sailing out to war while their long-suffering wives wait at home with baby Vikings. (We knew it! We always knew it.) Plus, some other findings are challenging that whole “rape and pillage” thing, too. 7 Theories on Time That Would Make Doc Brown's Head Explode There are a few things in this world that we can always rely on as constants: The sun will always rise each morning, the seasons will always change and time will inevitably march forward at its predictable clip. Except the sun doesn't actually rise, seasons are disappearing and time ... well, see, time is tricky, too. For example ... #7.

The Science of Dreams and Why We Have Nightmares by Maria Popova The psychology of our built-in nocturnal therapy. “The interpretation of dreams is the royal road to a knowledge of the unconscious activities of the mind,” Freud argued in his influential treatise The Interpretation of Dreams in 1900. “The earth is heavy and opaque without dreams,” Anaïs Nin wrote in her diary in 1940. Drugs That May Cause Memory Loss Side Effect How they can cause memory loss: Benzodiazepines dampen activity in key parts of the brain, including those involved in the transfer of events from short-term to long-term memory. Indeed, benzodiazepines are used in anesthesia for this very reason. When they're added to the anesthesiologist's cocktail of meds, patients rarely remember any unpleasantness from a procedure. Midazolam (Versed) has particularly marked amnesic properties.

Gregg Braden – Manifesting The World You Want To See Through The Power Of Your Subconscious Mind by Gregg Prescott, M.S.Editor, In5D.com In psychology, the subconscious is the part of consciousness that is not currently in focal awareness. Carl Jung believed there is a limit to what can be held in our conscious focal awareness, adding that an alternative storehouse for knowledge and prior experience is needed. In regard to the subconscious mind, Jung is quoted for saying, “Until you make the unconscious conscious, it will control your life and you will call it fate.”

Dual DNA Streams For European Inheritance This is a careful analysis of the apparent DNA distribution throughout . It is observed that two groups of peoples emerged by way of naturally expanding populations. The Southern one is presumed to originate out of the Levant to dominate the Mediterranean littoral. Virginia Woolf on the Elasticity of Time Long before psychologists had any insight into our warped perception of time — for instance, why it slows down when we’re afraid, speeds up as we age, and gets twisted when we vacation — or understood how our mental time travel made us human, another great investigator of the human psyche captured the extraordinary elasticity of time not in science but in art. In Orlando: A Biography (public library) — her subversive 1928 masterwork, regarded as “the longest and most charming love letter in literature,” which also gave us her insight into the dance of self-doubt in creative work — Virginia Woolf (January 25, 1882–March 28, 1941) writes: Time, unfortunately, though it makes animals and vegetables bloom and fade with amazing punctuality, has no such simple effect upon the mind of man. The mind of man, moreover, works with equal strangeness upon the body of time.