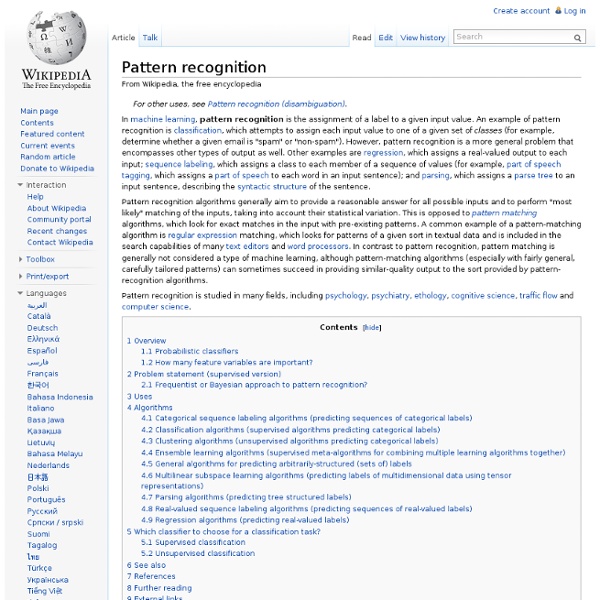 Pattern recognition algorithms generally aim to provide a reasonable answer for all possible inputs and to perform "most likely" matching of the inputs, taking into account their statistical variation. This is opposed to pattern matching algorithms, which look for exact matches in the input with pre-existing patterns. A common example of a pattern-matching algorithm is regular expression matching, which looks for patterns of a given sort in textual data and is included in the search capabilities of many text editors and word processors. In contrast to pattern recognition, pattern matching is generally not considered a type of machine learning, although pattern-matching algorithms (especially with fairly general, carefully tailored patterns) can sometimes succeed in providing similar-quality output to the sort provided by pattern-recognition algorithms. Overview[edit] Probabilistic classifiers[edit] They output a confidence value associated with their choice. . to output labels . . . where Related:  Organizing, understanding, analysis, & publishing

Tools - Cool Infographics Adioma creates information graphics out of your textual data, using timelines, grids and icons. Create impressive charts from spreadsheets. Assemble into dashboards, embed in websites, or simply share a link. What is Pattern Analysis? PATN is a software package that performs Pattern Analysis. PATN aims to try and display patterns in complex data. Complex in PATN's terms, means that you have at least 6 objects that you want to know something about and a suite of more than 4 variables that describe those objects. Data must be in the form of a spreadsheet of rows (the objects in PATN) and the columns (variables), as in Microsoft Excel™. There are usually around 7 components to a 'realistic' (read as adequate, comprehensive, fair, reasonable or intelligent) pattern analysis in PATN- Import the data Check the data using PATN's Visible Statistics functions. PATN is setup to make it easy for you to follow this process.

Data fusion Data fusion is the process of integration of multiple data and knowledge representing the same real-world object into a consistent, accurate, and useful representation. fusion of the data from 2 sources (dimension #1 & #2) can yield a classifier superior to any classifiers based on dimension #1 or dimension #2 alone Data fusion processes are often categorized as low, intermediate or high, depending on the processing stage at which fusion takes place.[1] Low level data fusion combines several sources of raw data to produce new raw data. The expectation is that fused data is more informative and synthetic than the original inputs. For example, sensor fusion is also known as (multi-sensor) data fusion and is a subset of information fusion. Geospatial applications[edit] In the geospatial (GIS) domain, data fusion is often synonymous with data integration. A simplified example of this process is shown below where data set "α" is fused with data set β to form the fused data set δ. See also[edit]

Visual Literacy: An E-Learning Tutorial on Visualization for Communication, Engineering and Business Visual Cards for Collaboration and Team Creativity Making the Complex Clear Visual Literacy for Managers - How Sketching enables Visual Problem Solving and Communication (get the hardcopy edition at sketchingatwork.com) By clicking on a map or diagram thumbnail below, you can access an interactive graphic overview on tools, books, researchers in different visualization fields, as well as on key success factors of visualization. There is also an interactive organizing table that shows (incl. examples) one hundred visualization-based methods. Stairs to visual excellence "Towards A Periodic Table of Visualization Methods for Management"Lengler R., Eppler M. (2007). Version 1.5 of the periodic table as PDF Chris Wallace has implemented an XML page on which you can see and print the mouseover pictures individually. August 21st 2008 marks the 61st birthday of the great Ben Shneiderman, for many the father of information visualization. Imperfect Storm (Click on image to enlarge)

NodeXL Graph Gallery: Graph Details The graph represents a network of 1,613 Twitter users whose recent tweets contained "#agchat", or who were replied to or mentioned in those tweets, taken from a data set limited to a maximum of 18,000 tweets. The network was obtained from Twitter on Tuesday, 13 December 2016 at 16:56 UTC. The tweets in the network were tweeted over the 9-day, 18-hour, 37-minute period from Saturday, 03 December 2016 at 22:04 UTC to Tuesday, 13 December 2016 at 16:42 UTC. The graph is directed. The graph's vertices were grouped by cluster using the Clauset-Newman-Moore cluster algorithm. The graph was laid out using the Harel-Koren Fast Multiscale layout algorithm. Top Word Pairs in Tweet in Entire Graph:[355] agblog,via[199] agchat,conference[151] rt,agchat[121] vancecrowe,agchat[102] kansas,city[99] rt,agchatfound[86] rt,farmfutures[71] agchat,agchat[67] farm,futures[67] via,beef

Data feed Data feed formats[edit] Emerging semantic data feed[edit] The Web is evolving into a web of data or Semantic Web. Data will be encoded by Semantic Web languages like RDF or OWL according to many experts' visions. So, it is not difficult to envision data feeds will be also in the form of RDF or OWL. CSV datafeed and affiliate marketing[edit] CSV datafeeds are mostly being used within the affiliate marketing. See also[edit] Semantic publishing References[edit] External links[edit]

Wizualizacja sztuki New DataBasic Tool Lets You “Connect the Dots” in Data Catherine D'Ignazio and I have launched a new DataBasic tool and activity, Connect the Dots, aimed at helping students and educators see how their data is connected with a visual network diagram. By showing the relationships between things, networks are useful for finding answers that aren’t readily apparent through spreadsheet data alone. To that end, we’ve built Connect the Dots to help teach how analyzing the connections between the “dots” in data is a fundamentally different approach to understanding it. The new tool gives users a network diagram to reveal links as well as a high level report about what the network looks like. Using network analysis helped Google revolutionize search technology and was used by journalists who investigated the connections between people and banks during the Panama Papers Leak. Learn more about Connect the Dots and all the DataBasic tools here. Have you used DataBasic tools in your classroom, organization, or personal projects?

Spreadsheets Are Graphs Too! - Neo4j Graph Database By Felienne Hermans, Assistant Professor, Delft University of Technology | August 26, 2015 Editor’s Note: Last May at GraphConnect Europe, Felienne Hermans – Assistant Professor at Delft University of Technology – gave this engaging talk on why you shouldn’t overlook the power of the humble spreadsheet. Listen to or read her presentation below. Register for GraphConnect San Francisco to hear more speakers like Felienne present on the emerging world of graph database technologies. People often ask me, ‘How is it possible that you research spreadsheets? Did you actually write a dissertation on spreadsheets?’ The answer is, Yes, I did. Ninety-five percent of all U.S. companies still use spreadsheets for financial reporting, so spreadsheets run the financial domain. Analysts decide the strategy of their company based on spreadsheets. Either way, analysts make decisions that steer the company based on the data in their spreadsheets. Spreadsheets often exist under the radar. Spreadsheets Are Code