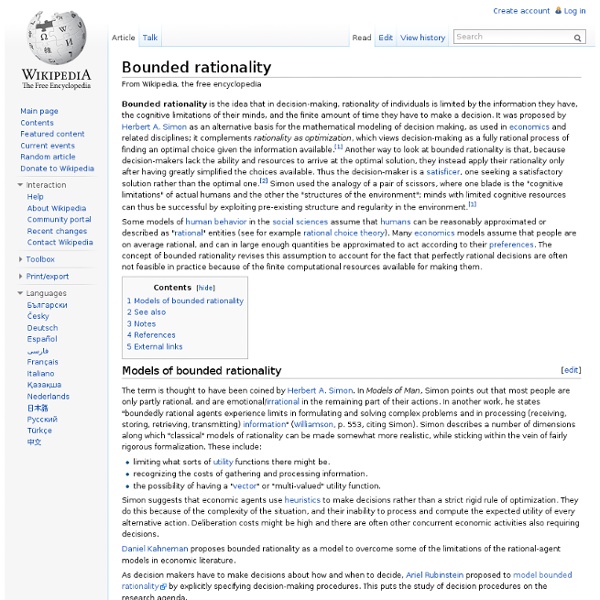 Bounded rationality is the idea that in decision-making, rationality of individuals is limited by the information they have, the cognitive limitations of their minds, and the finite amount of time they have to make a decision. It was proposed by Herbert A. Simon as an alternative basis for the mathematical modeling of decision making, as used in economics, political science and related disciplines; it complements rationality as optimization, which views decision-making as a fully rational process of finding an optimal choice given the information available.[1] Another way to look at bounded rationality is that, because decision-makers lack the ability and resources to arrive at the optimal solution, they instead apply their rationality only after having greatly simplified the choices available. Some models of human behavior in the social sciences assume that humans can be reasonably approximated or described as "rational" entities (see for example rational choice theory). Origins[edit]

Cognitive bias Systematic pattern of deviation from norm or rationality in judgment Although it may seem like such misperceptions would be aberrations, biases can help humans find commonalities and shortcuts to assist in the navigation of common situations in life.[5] Some cognitive biases are presumably adaptive. Cognitive biases may lead to more effective actions in a given context.[6] Furthermore, allowing cognitive biases enables faster decisions which can be desirable when timeliness is more valuable than accuracy, as illustrated in heuristics.[7] Other cognitive biases are a "by-product" of human processing limitations,[1] resulting from a lack of appropriate mental mechanisms (bounded rationality), impact of individual's constitution and biological state (see embodied cognition), or simply from a limited capacity for information processing.[8][9] Overview[edit] The "Linda Problem" illustrates the representativeness heuristic (Tversky & Kahneman, 1983[14]). Types[edit] List of biases[edit]

Rational choice theory Rationality is widely used as an assumption of the behavior of individuals in microeconomic models and analyses and appears in almost all economics textbook treatments of human decision-making. It is also central to some of modern political science,[2] sociology,[3] and philosophy. A particular version of rationality is instrumental rationality, which involves seeking the most cost-effective means to achieve a specific goal without reflecting on the worthiness of that goal. Definition and scope[edit] The concept of rationality used in rational choice theory is different from the colloquial and most philosophical use of the word. Early neoclassical economists writing about rational choice, including William Stanley Jevons, assumed that agents make consumption choices so as to maximize their happiness, or utility. Rational choice theorists do not claim that the theory describes the choice process, but rather that it predicts the outcome and pattern of choices. Formal statement[edit]

List of cognitive biases Cognitive biases are tendencies to think in certain ways that can lead to systematic deviations from a standard of rationality or good judgment, and are often studied in psychology and behavioral economics. There are also controversies over some of these biases as to whether they count as useless or irrational, or whether they result in useful attitudes or behavior. For example, when getting to know others, people tend to ask leading questions which seem biased towards confirming their assumptions about the person. Although this research overwhelmingly involves human subjects, some findings that demonstrate bias have been found in non-human animals as well. Decision-making, belief, and behavioral biases[edit] Many of these biases affect belief formation, business and economic decisions, and human behavior in general. Social biases[edit] Most of these biases are labeled as attributional biases. Memory errors and biases[edit] Common theoretical causes of some cognitive biases[edit] Notes[edit]

• Statista - The Statistics Portal for Market Data, Market Research and Market Studies Encore: Taming Capitalism Run Wild BILL MOYERS: This week on Moyers & Company… RICHARD WOLFF: Our system capitalism, which we finally have to debate now that it’s so dysfunctional. Our system isn’t working. It isn’t producing for the mass of people. And an economic system that is only as acceptable, or should be, as its performance. ANNOUNCER: Funding is provided by: Carnegie Corporation of New York, celebrating 100 years of philanthropy, and committed to doing real and permanent good in the world. The Kohlberg Foundation. Independent Production Fund, with support from The Partridge Foundation, a John and Polly Guth Charitable Fund. The Clements Foundation. Park Foundation, dedicated to heightening public awareness of critical issues. The Herb Alpert Foundation, supporting organizations whose mission is to promote compassion and creativity in our society. The Bernard and Audre Rapoport Foundation. The John D. Anne Gumowitz. The Betsy And Jesse Fink Foundation. The HKH Foundation. Barbara G. BILL MOYERS: Welcome. BILL MOYERS: Why?

Best Free Schedule Maker Tool + Productivity Guide by Expert April once struggled with her schedule, or the lack thereof. She works in ad sales at a large tech company in Manhattan. She used to hit her aggressive sales quotas year after year, but not anymore. The days of calmly and confidently representing her company and products were gone and so was fostering deep relationships with her clients. Those pressures infected April’s schedule. If you want to know what’s important to someone without asking them, where would you look? When it comes to using a schedule maker and planning your schedule, where do you begin? The trouble is, we don’t make time to live our values. Although each of us may subscribe to different values, it’s helpful to categorize them into three overlapping life domains. This concept is thousands of years old. More recently, Daniel Goleman, author of Focus: The Hidden Driver of Excellence, relates the domains of our life to how we split our attention.

THE ECONOMY: Time For Companies To Pay Their Employees More Stages of PLN adoption David Warlick wrote a post the other day about being able to zip up or turn off your Personal Learning Network (PLN). I too have been thinking about how one goes about starting a PLN, how do you monitor it, and how do you learn to shut it off. We all continue to push teachers to start PLNs if they haven’t already. Learning from the collective knowledge of educators around the world. I have noticed an emerging trend of what one goes through when adopting a PLN for the first time. As I’ve helped others start their PLNs I have found that many of them go through these same stages. Stages of Personal Learning Networks Adoption Stage 1 Immersion: Immerse yourself into networks. Stage 2 Evaluation: Evaluate your networks and start to focus in on which networks you really want to focus your time on. Stage 3 Know it all: Find that you are spending many hours trying to learn everything you can. Stage 4 Perspective: Start to put your life into perspective. [tags]PLN[/tags]