A space to explore, share and shape the issues facing social scientists 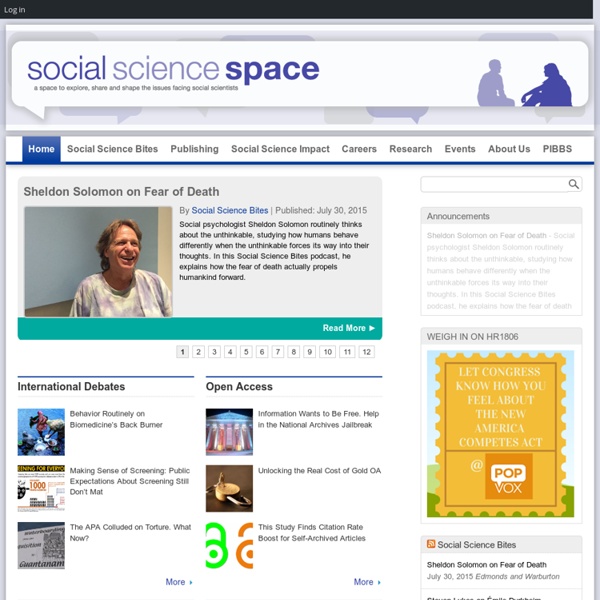 Why Are People Dying to Bring You Dinner? The Shocking Facts About Our Food System March 30, 2012 | Like this article? Join our email list: Bienvenidos al Proyecto Ciencia de Oxford e-Social Advances in information and communication technology are transforming the way scholarly research is conducted across all disciplines. The use of increasingly powerful and versatile computer-based and networked systems promises to change research activity as profoundly as the mobile phone, the Internet, and email have changed everyday life. The Oxford e-Social Science (OeSS) research project studies the use and impacts of these new approaches—called 'e-research' — and their ethical, legal, and institutional implications.

The Basic Laws of Human Stupidity by Carlo M. Cipolla, Professor of Economics, UC Berkeley in Whole Earth Review, Spring 1987 The First Basic Law of Human Stupidity asserts without ambiguity that Always and inevitably everyone underestimates the number of stupid individuals in circulation... As you consider Dr. Cipolla's perspective on such matters, what do you think of the people who manage his estate?

Science for celebrities In January 2007, exasperated by the tide of influential and misleading claims made by celebrities in the public sphere, we worked with scientists to produce Making Sense of Science for Celebrities. Each year since, Sense About Science has reviewed the odd science claims people in the public eye have made - about diets, cancer, magnets, radiation and more - sent in to us by scientists and members of the public. Many of these claims promote theories, therapies and campaigns that make no scientific sense. We ask scientists to respond, to help the celebrities realise where they are going wrong and to help the public to make sense of celebrity claims. “We seem to be seeing a celebrity divide on science. The implausible and frankly dangerous claims about how to avoid cancer, improve skin or lose weight are becoming ever more ridiculous.

Cyborgology » humanity meets technology On Pharrell’s “Happy” by robinjames, 2 days ago at 05:00 am I find Pharrell’s massive hit “Happy” really, really irritating. And, for that reason, I love it. In the same way that The Sex Pistols were Malcolm McLaren’s massive joke on us, this song is, I think, Pharrell’s attempt to pull a fast one on the economy of viral “upworthiness”–an economy that, as David has shown, is really racist. "Theory" in sociology What is a sociological theory? And how does it relate to the challenge of providing explanations of social facts? In the natural sciences the answer to this question is fairly clear. A theory is a hypothesis about one or more entities or processes and a specification of their operations and interactions. A theory is articulated in terms that permit rigorous and unambiguous derivation of implications for the behavior of a body of phenomena -- perhaps through specification of a set of equations or through a set of statements with deductive consequences. A theory may specify deterministic properties of a set of entities -- thus permitting point predictions about future states of the relevant system; or it may specify probabilistic relations among entities, giving rise to statements about the distribution of possible future states of the system.

SOCIAL FACTORS SHAPING PERCEPTION AND DECISION-MAKING Elsewhere we examined several great tensions shaping the human condition: the role of nature versus nurture in shaping humans' social fates and the tensions between the needs of individuals' and the needs of their social systems. The relative importance of these tensions--and relative potency of one force versus the other--has produced great divides in social psychological theories. Another issue generating a major schism involves the workings of the human psyche, whether individuals' decision-makings are more-or-less rational (or, perhaps are determined by some universally uniform neural brain design) or whether they are shaped by uncontrollable sociocultural (external) or emotional (internal) forces. Here, the intent is to stress the socio-cultural component of consciousness and thought. The idea that "true" reality is never truly graspable by humans' sensory and cognitive equipment goes back at least to the works of Plato. Consider the social construction of sensory distinctions.

Foundational Questions Institute The Foundational Questions Institute (FQXi) To catalyze, support, and disseminate research on questions at the foundations of physics and cosmology, particularly new frontiers and innovative ideas integral to a deep understanding of reality but unlikely to be supported by conventional funding sources. FQXi has five goals: {*style:<ul style="padding-left:20px;"><li> To expand the purview of scientific inquiry to include scientific disciplines fundamental to a deep understanding of reality, but which are currently largely unsupported by conventional grant sources Sociology Lens » news. resources. commentary. Nudge yourself better: how to become your own Choice Architect. by Roger Tyers, 3 days ago at 11:00 am By: Adam GaultCollection: OJO My PhD research is about changing people’s behaviour – how to make people lead better, greener, more sustainable lives. A key part of my outlook is how insights from so-called ‘Nudge’ theory might be used to foster change in individuals.

Reading Capital Reading Marx’s Capital Volume I with David Harvey A close reading of the text of Karl Marx’s Capital Volume I in 13 video lectures by Professor David Harvey. Links to the complete course: These lectures were the inspiration for the book: A Companion to Marx’s Capital published by Verso in 2010. Detalles del curso - Clio I Cableado - Otoño 2012 Course Description Mondays, 7:20 to 10:00, Fall 2012 4th Floor Conference Room, Research 1 Building This course is designed to introduce history graduate students to the theories and methods of digital history. Over the last 14 years (check out the syllabus from 1998), the course has prepared a generation of graduate students to do cutting edge historical work in a digital environment, using digital tools and methods. Through the semester we will pursue both the technical and theoretical aspects of digital history. This means that our work will include a combination of readings in the field, assessments of existing digital sites and tools, and hands on work with those tools.

List of rampage killers This is a partial list of rampage killings. It is further divided into several subsections. This list shall contain every case with at least one of the following features: Rampage killings with six or more dead (excluding the perpetrator)Rampage killings with at least four people killed and a double digit number of victims (dead plus injured)Rampage killings with at least a dozen victims (dead plus injured) In the tables that follow, the "W" column indicates the weapon, or weapons, used. Details are listed in the Annotation section. Start Page - The Faculty of Science, University of Gothenburg, Sweden The Faculty of Science The Faculty of Science includes all the major subject areas in the fields of mathematics and natural sciences. With 6 500 students and 730 employees it is the second largest Faculty at the University of Gothenburg. Sulfur Haunts the Ghost Wreck [March 4, 2014] Sulfur and iron accumulation has once again been found in wood samples from old shipwrecks in the Baltic Sea. This time the samples are from the merchant vessel Ghost wreck and the warships Sword and the Crown.